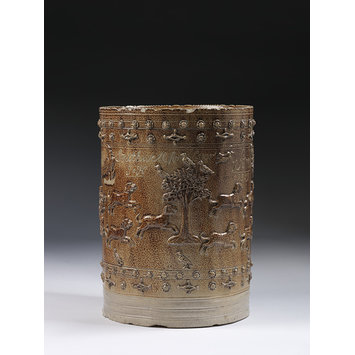 This stoneware ale mug was made in Bristol by the potter John Harwell who obligingly signed it on the base. It is also dated 1739 and inscribed with the name of Edward Southwell, the successful candidate in the Bristol bye-election of 1739.

In 1739 John Harwell was still an apprentice potter. His master was Joseph Taylor, and it is likely they both worked at the Redcliff Pottery of Thomas Frank in Bristol. Harwell successfully completed his apprenticeship and became free in 1740, and this mug was probably made to demonstrate his exceptional potting abilities. Hunting subjects were traditionally used to decorate tavern or ale mugs, and by first dipping the mug in a slip glaze, Harwell has applied a wonderful range of individually moulded elements called 'sprigs' including hawks, trees with birds, a sun, dogs etc..

Tankard of salt-glazed stoneware, cylindrical with a loop handle, and with decoration moulded in relief and applied, covered outside except near the base with mottled brown glaze, and round the middle is a hare-hunting scene, with two huntsmen, birds flying and perched on trees, and the sun, and small rosettes and lozenges are set in rows round the top and base, and along the middle of the handle, and between the reliefs are incised the words 'Southwell for Ever. C.W.M. 1739', and the edge is cut in a pattern of alternate serrations and arcs, and under the base is incised the name 'John Harwell'.

Bristol (Probably made by John Harwell while apprenticed to Joseph Taylor at Thomas and Richard Frank's Redcliff Back pottery in Bristol., made)

'Southwell for Ever. C.W.M. 1739'
Incised between the reliefs

'John Harwell'
Incised under the base

In the 'Browne Muggs' catalogue, Robin Hildyard gives the following information:
Cat. no. 192. (private collection) The earliest recorded signed mug by John Harwell is dated 1738 (no. 192 in the exhibition catalogue). Harwell was apprenticed to Joseph Taylor in 1733 and free in 1740. Both are thought to have been working at Thomas Frank's Redcliff Pottery at the time. Later in the 1760s John Wedgwood supplied him with earthen wares in 1761, 1767 and 1768 at an address in Rackhy Street, probably a 'Staffordshire Warehouse'. He died c. 1772-4.
Cat. no. 193 (this mug) Edward Southwell was the successful candidate in the 1739 Bristol bye-election. Delftware bowls with the same inscription may also be Harwell pieces, as he was a gallypotmaker. The recipients of this mug have not been identified. Note that Harwell became free in 1740: this might be an apprentice piece, made to demonstrate his exceptional skill.'
Further mugs signed or associated with Harwell or his son are nos. 194-196.

Tankard of salt-glazed stoneware, cylindrical with a loop handle, and moulded, made by John Harwell in Bristol, mid 18th century. 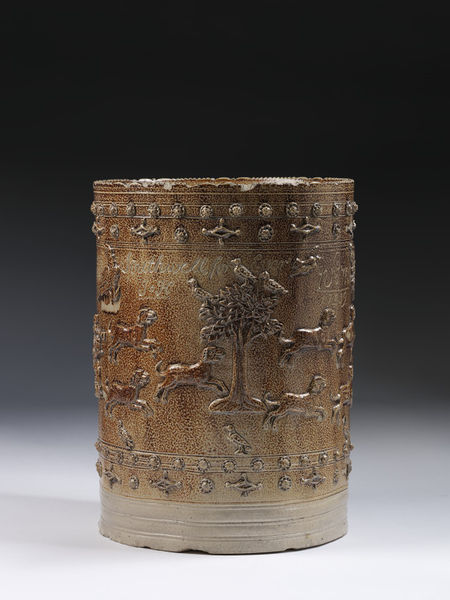