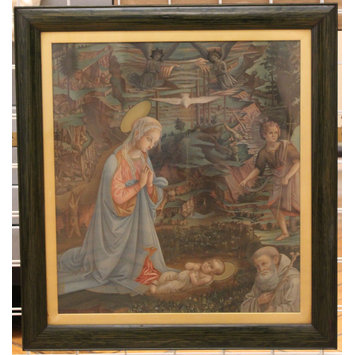 Object Type
This is a type of print called a chromolithograph, another word for a colour lithograph and often used to describe reproductive prints. A chromolithograph is produced by applying the design to be printed onto a stone with a greasy chalk. The surface of the stone is then moistened. As grease and water do not combine, the parts already drawn upon repel the water and the untouched parts absorb it. Greasy ink is passed over the surface. The wet parts reject the ink while the greasy parts attract it. The paper on which the image is to be printed is placed on the surface and together they are passed through a press. One stone is used for each colour.

This print was produced for the Arundel Society. The subjects, to be reproduced for subscribers to the Society, were chosen by a council who favoured Italian decorative and narrative fresco cycles of the 14th, 15th and 16th centuries. Artists were employed to copy these works of art. The watercolours they produced were examined and selected by the council and then forwarded to the printers.

Ownership & Use
Subscribers to the Arundel Society were drawn from many walks of life. By the time of the Society's eventual closure in 1897 over 200,000 chromolithographs had been circulated. Regular members would have been in possession of a large number of prints and for this reason many examples found their way into school rooms, churches and village halls where they can still be found today.

The image shows the Virgin kneeling by the baby Jesus who is lying on the ground. The scene is set against a rocky landscape. In the foreground on the right is Saint Anthony Abbot and above him is a youthful Saint John the Baptist. At the top of the picture is the Holy Trinity.

The Madonna and Child from the picture by Fra Filippo Lippi in the Accademia delle Arti Florence.
Copied by Herr E. Kaiser.
Chromolithographed by Fritz Frick, Berlin
Arundel Society 1885

This print belonged to the donor's father who was a vicar (possibly J.T. Mitchell of St Bridget's Church in Liverpool).

This print is after 'Virgin and Child' by Filippino Lippi in the Galleria Communale, Prato

The Arundel Society, founded in 1848 was named after Thomas Howard, second Earl of Arundel and Surrey (1548-1646), the great connoisseur and collector. Its aim was to promote a greater knowledge of art through the publication of literary works and reproductions of works of art. Italian decorative and narrative fresco cycles of the fourteenth, fifteenth and sixteenth centuries predominated but classical art was included in the plans from the outset and some examples of the work of Northern European artists were added later.

The subjects were selected by a Council consisting of people influential in the art world, including John Ruskin, the renowned author and art critic. The emphasis, in keeping with wider current thinking, was on providing instruction rather than enjoyment. The prospectus issued in 1849 stated that 'in their execution, that manner will be preferred which most truthfully expresses the original, rather than that which presents the greatest attraction to the eye'.

By the time of the Society's closure in 1897 over two hundred chromolithographs had been circulated. Regular members would have been in possession of a large number of prints and for this reason many examples found their way into school rooms, churches and village halls.

Madonna and Child; copy after a fresco by Filippino Lippi for the Arundel Society; chromolithograph; 1885 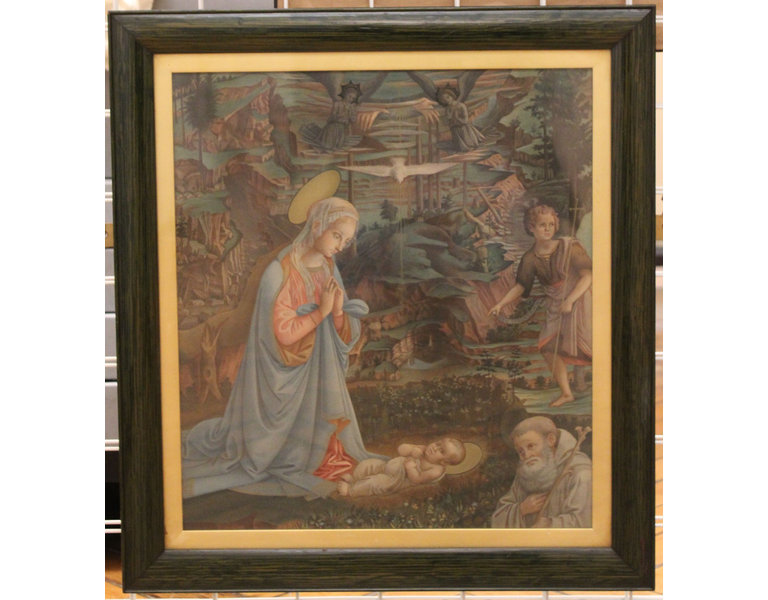