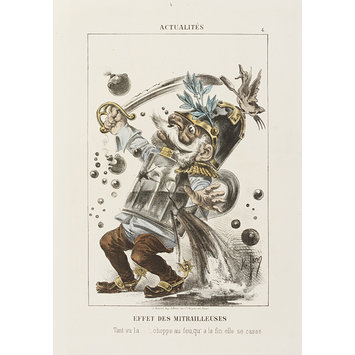 Satirical print in which the German emperor Wilhelm I staggers, encased in a beer mug, which breaks up under fire from a 'mitrailleuse', a precursor to the machine gun. On top of his helmet is a bird, pierced by a fork. Print from a set of caricatures, broadsheets and illustrations in ten volumes. Each volume is half-bound in red leather, gold tooled and stamped with imperial emblems, title etc.

'Effet Des Mitrailleuses'. Satirical illustration by A. Jann in which the German emperor Wilhelm I staggers, encased in a beer mug, which breaks up under fire from a 'mitrailleuse'. Hand-coloured lithograph, France, 1870-1871.

King William staggers, replete with food and drink, encased in a beer mug, which breaks up under fire from a mitrailleuse. The French put great faith in this new weapon, a primitive precursor of the machine gun, which consisted of a bundle of 25 barrels which could be fired either simultaneously or in rapid succession. Unfortunately, because it had been manufactured in conditions of strict secrecy and issued to the troops only a few days before mobilisation, none of the soldiers knew how to use it. Nor did the mitrailleuse come up to expectation in the field; it was as unwieldy and vulnerable as Herr Krupp's cannon without the latter's advantages. 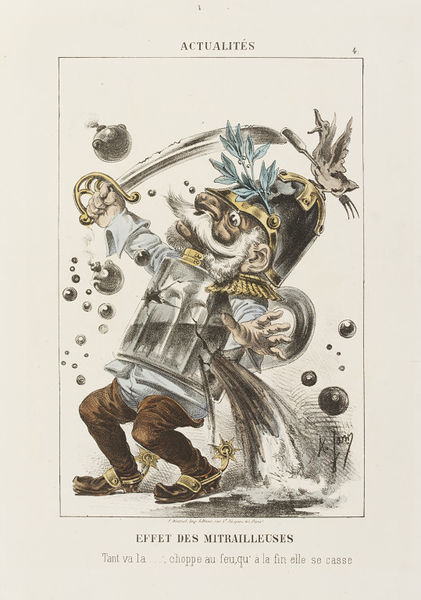