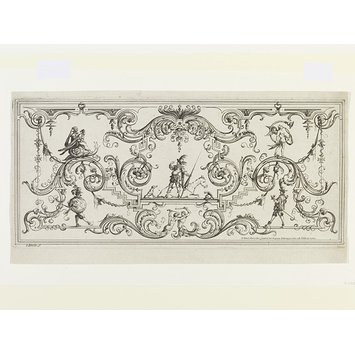 Design for a marquetry panel

This print is an elaborate design for a panel of Boulle marquetry. The horizontal format indicates its intended application to a commode-, bureau- or table-top, or possibly a drawer front. It was published in the first half of the eighteenth century and while bearing some of the hallmarks of the earlier Boulle 'style' it is a lighter interpretation, effectively marking the transition from the baroque grotesque to the rococo arabesque. That such an elaborate design could be realised using the notoriously difficult technique of tortoiseshell and brass marquetry was an indication of Boulle's skill.

The composition reveals to what extent designers of this period plundered other printed sources in their search for vignettes and motifs. The female figure in the top right-hand corner for example, appears to be based on Dürer’s engraving of Fortuna (c. 1502), while the duelling demi figures at the base of the composition evoke Mantegna’s canonical Battle of the Sea Gods (c. 1481). André-Charles Boulle had a collection of old master prints and drawings, famously destroyed by fire in 1720, that he would have drawn from in creating his designs and direct links have been traced by scholars to the work of such printmakers as Cornelis Bos.

This print is an elaborate design for a panel of Boulle marquetry. The horizontal format indicates its intended application to a commode-, bureau- or table-top, or possibly a drawer front, the last-named suggested by the space at the top of the composition where a handle or escutcheon plate could have been fitted. Such designs were published and sold to disseminate the work and style of the designer, thereby growing their reputation and influence. They were an important source for other designers and craftsmen and were also collected by print connoisseurs. The suite dates from the first half of the 18th-century and thus demonstrates the continued enthusiasm for the Boulle style and marquetry technique, some decades after its initial flourishing. They were executed by Jean-Philippe Boulle, ébéniste du Roi, son of the eponymous Boulle, André-Charles, in whose workshop he had learned his trade and after whose designs the prints were probably created or inspired. Boulle senior had previously published a suite of his furniture designs entitled, Nouveaux Desseins des meubles et ouvrages. Both suites demonstrate the cabinet maker's desire to be popularly associated with a technique and aesthetic of which, although not the originator, he had certainly mastered.

There is considerable confusion in the literature regarding the attribution of these prints. Historically the prints were attributed to André-Charles Boulle, but the printmaker's initials clearly do not tally with this. The IFF suggested they might be the work of Jean Boulle, A-C Boulle's father, but the publisher's dates make this impossible, unless they were published after Jean Boulle's death to his designs, or are reissues of an earlier suite. However, the lettering, 'I [J] Boulle f.' and 'I. [J.]P. Boulle fecit. CP.' specifically tells us that Boulle etched the plates himself and the initials are those of Jean-Philippe Boulle (as Guilmard also proposes), one of A-C Boulle's four sons, who died in 1744 and was thus a contemporary of the publisher, Gautrot. Gillian Wilson mentions the prints in her 1972 article for Furniture History,where she describes them as the work of Jean-Philippe Boulle. 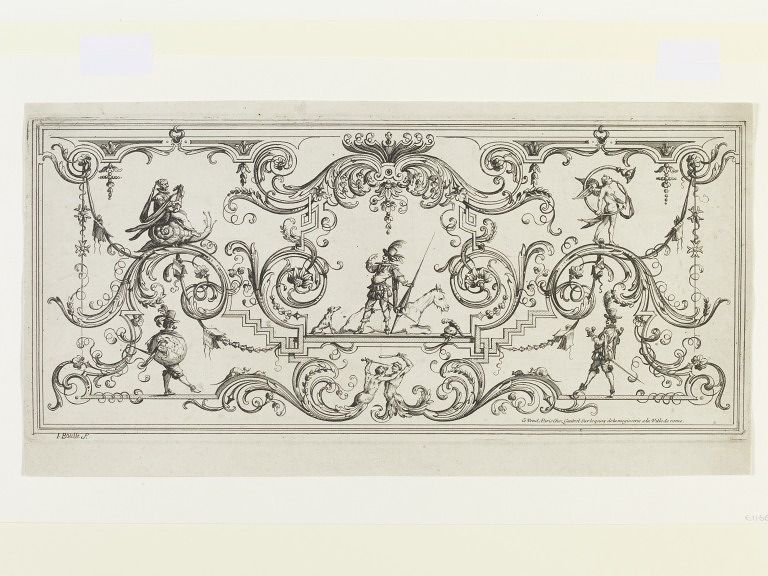