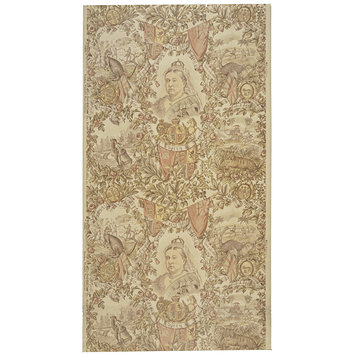 Object Type
In Britain, paper printed with patterns has been used for decorating walls since the 16th century. By the late 19th century wallpapers were widely used by all classes, both in homes and in public buildings.

Historical Associations
This wallpaper was designed to celebrate Queen Victoria's Golden Jubilee in 1887, the fiftieth year of her reign. The design shows a portrait of the Queen surrounded by representations of India, Canada, Australia, and the Cape Colony (part of what is now South Africa), which were then part of the British Empire.

Ownership & Use
Wallpapers commemorating important historical events and royal anniversaries were produced in large numbers in the second half of the 19th century. They were intended for the cheaper end of the market. At the time many critics and design reformers condemned pictorial patterns like this as evidence of bad taste and poor design. This wallpaper is a 'sanitary' paper. It was printed with oil-based colours that were not soluble in water, so that the surface was washable. Sanitary wallpapers with commemorative designs would probably have been used in an inn or hotel rather than in an ordinary home.

Portraits of the Queen are interspersed with vignettes illustrating the people and the wildlife in the outposts of the British Empire on four continents: Australia, Canada, Cape Colony (later South Africa), and India.

AUSTRALASIA
Left side, in ribbon

British Galleries:
This is one of several wallpapers designed to commemorate royal anniversaries. It would have been used in a hotel or pub rather than a private house, and is an indication of how popular the image of Victoria had become by the time of the 1887 Jubilee. The portrait of the Queen is surrounded by representations of the colonies of the British Empire. [27/03/2003] 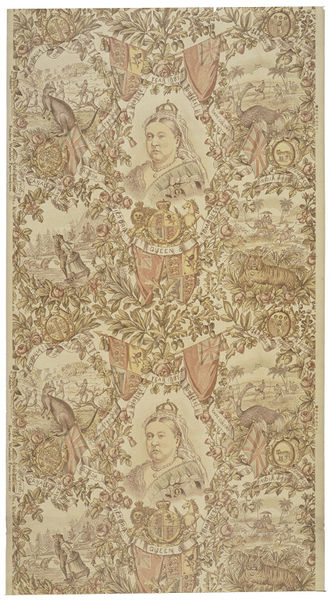