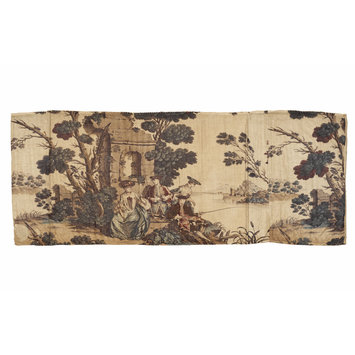 Object Type
This furnishing fabric has been printed using engraved copper plates. The introduction of copper-plate printing in the 1750s encouraged new possibilities in the development of printed textiles design, allowing a fineness of detail and delicacy of drawing which had not been achieved in earlier woodblock-printed textiles. It also allowed much larger pattern repeats, which made it particularly suitable for bed hangings.

Places
Robert Jones's factory at Old Ford, Middlesex (now London), where this fabric was printed in 1769, was one of the leading textile printing works in England at that time. The importance of the factory can be assessed by the advertisements for the sale of its premises and equipment in 1780. These show that the printworks occupied 67 acres and the assets included '200 copper plates and 2,000 blocks and prints, most of which are esteemed patterns calculated for a general course of foreign trade'.

Materials & Making
The fabric is a fustian, woven with a linen warp and cotton weft, as British law prohibited the production of all-cotton cloth at the time it was printed. (The legislation was brought in originally to protect the wool and silk industries.) In 1774, under the influence of developments in the home production of cotton pioneered by the textiles industrialist Richard Arkwright (1732-1792), the previous ban on printing all-cotton fabric was finally removed.

This group of textiles comprises a large curtain, two smaller lined pieces, and four lined valances, which would originally have formed part of a set of bed hangings. The ground is a mixed fabric with linen warp and cotton weft printed in purple with madder from two engraved copper plates. Other colours have been added by woodblock, except for the blue done by pencilling. One plate depicts a scene of a shooting party of four men, resting by a large pedestal supporting an urn, in a landscape, with dogs and dead game; the other depicts a fishing party of two women and two men sitting next to a ruin at the edge of a lake. Both scenes have the inscription 'R. IONES & Co Iany. 1st 1769' on the masonry; the fishing party scene also has the inscription 'R.Iones & Co Old Ford'.
Pattern repeat height 81.5 x width 36.5 inches (207 x 92.7 cm).

All of the pieces except the main curtain are lined with plain woven undyed cotton, with blue threads in selvedge visible in one place, therefore woven between 1774 and 1811. Width of lining cotton 78 cm.

This group of textiles was purchased from antique dealers Messrs. J Kyrle Fletcher, 79 High Street, Newport, Monmouth (see Museum file MA/1/F773). Mr Kyrle Fletcher wrote to the museum on 8 September 1934 offering them : "we have had sent to us for disposal a very fine curtain of old English chintz decorated in coloured copper plate design...This curtain which is roughly 8 feet by 10 feet is arranged in 6 groups each of which is signed and dated."
A second letter mentions "our clients were asking for 30 guineas for the curtain, and we advised it being offered to the Victoria and Albert Museum at a lower price which we fixed" (the museum paid £24). There is no further reference to provenance.

When the textiles arrived they were described as "1 chintz curtain (in 4 parts)". It was agreed that the acquisition should be shared between Textiles and Circulation Departments : minute on file from Mr Wace, Keeper of Textiles : "I would suggest that of the main curtain two widths be reserved for Textiles and one width for Circulation, and the valance should also go to Circulation". Reply from Mr Kennedy of Circulation :" We shall be glad to have one width and a valance. I suggest to Mrs Clayton that a small photograph be taken of the whole curtain before it is divided, so that it can be shown with the sections which we shall to make for purposes of circulation [sic]."

Therefore it seems that the large curtain with six scenes was divided up, and now comprises T.140, Circ.112 and Circ.112a. One of the original three valances must also have been divided, as there are now four pieces of valance (T.140 a&b, Circ.112 b&c). It is likely to be the two Circ numbered pieces, as only one valance was reportedly sent to Circ.

A piece of the same design is in the Musee des Arts Decoratifs, Paris.

The ground is a mixed fabric with linen warp and cotton weft, as the textile was printed while legislation was still in place banning the production of all-cotton textiles in England. This legislation was repealed in 1774.

British Galleries:
Robert Jones was a leading English textile printer during the 1760s and 1770s. This example indicates the high quality of his production. It was printed using a combination of techniques. Two separate engraved copper plates made the design. Colours were added by wood block, and indigo blue 'pencilled' or painted in with a brush. [27/03/2003] 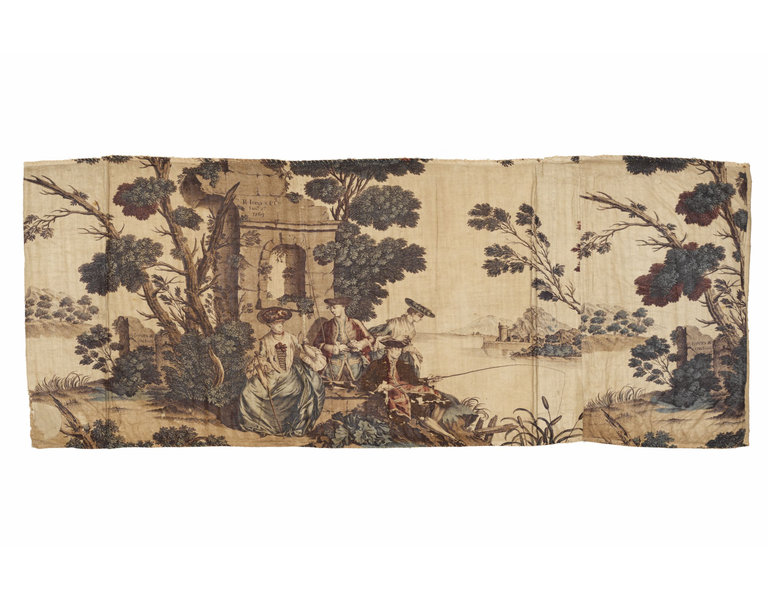