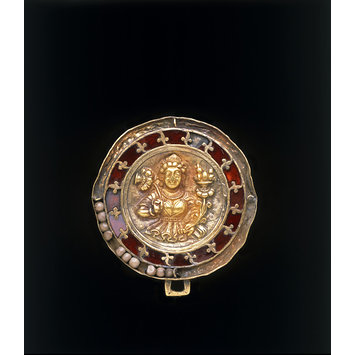 The central image of this medallion portrays a goddess in frontal pose, with a round face, wide-open eyes, and hair swept back from the forehead. The diadem crowning her head is of western classical origin, and is also found on a Tyche from Charsada and on stucco heads from Hadda. The deity is dressed in a short classical tunic, which is fastened on each shoulder with a round brooch, and held round the waist by a belt of juxtaposed square plaques, each marked with an indented circle in the centre. Other ornaments are a plain bangle, drop earrings and a necklace of twisted wire strands. A full-blown lotus is delicately held between the thumb and the forefinger of her right hand, with the little finger crooked: a standard gesture for holding attributes. In her left hand, a cornucopia evolves from the stem, leaves and full-blown flower of another lotus, with the prominent pistil and stamens emerging from the bowl-shaped centre transformed into a flask surrounded by pomegranates. The inclusion of this fruit suggest that she is a deity and according to legend, this fruit is said to resemble human flesh which was offered by the Buddha to the goddess when she was converted to protecting children instead of devouring them, as previously.
The cornucopia originates from Greece, where it is a symbol of fecundity, characteristic of the goddess Tyche, and subsequently also an attribute of the Iranian and Indian goddesses of fertility, Ardochsho and Hariti respectively, whose iconographic type derives from that of the Greek divinity.
The repousse figure is encircled by a flat band of garnet inlay regularly interspaced with a repeated trefoil motif reminiscent of a fleur-de-lys. Pearls, mostly now lost, are set in a grooved rim to form the outer border. A square attachment ring protrudes from the bottom edge of the rim.

From the Greater Gandhara artistic and cultural region in which Buddhist art flourished especially in the 2nd to 5th centuries AD (CE)., made)

Bought from the D.H.Gordon collection, 1948.

This pendant depicts Hariti, a fertility goddess (yakshi) absorbed into the Buddhist Pantheon as a protector of children. She wears a Hellenistic tunic and diadem and holds a flowering stem in each hand, one of which resembles a cornucopia of fruit. A pendant of this type is depicted being worn by the bodhisattva Maitreya in the collection (IS 100-1972).

The goddess of fertility is seen in a short Parthian style tunic holding two flowering stems, one of which bears a bowl of fruit, a reference to her fecundity. Pendants of this type were presumably worn by the wealthy Buddhist laity- they are certainly depicted on bodhisattva sculptures of the period. [25/9/2000]
10. Plaque showing the Goddess Hariti
200–400
The goddess of fertility and protector of children wears a short, Parthian-style tunic and holds two flowering stems. One stem bears a bowl of fruit. This originates in the cornucopia motif used in Greek art as a symbol of abundance. Pendants of this type were presumably worn by wealthy Buddhist laity.
Gold with pearls and garnets
Pakistan (Taxila region, Punjab Province)
Museum no. IS.9-1948 [06/06/2011] 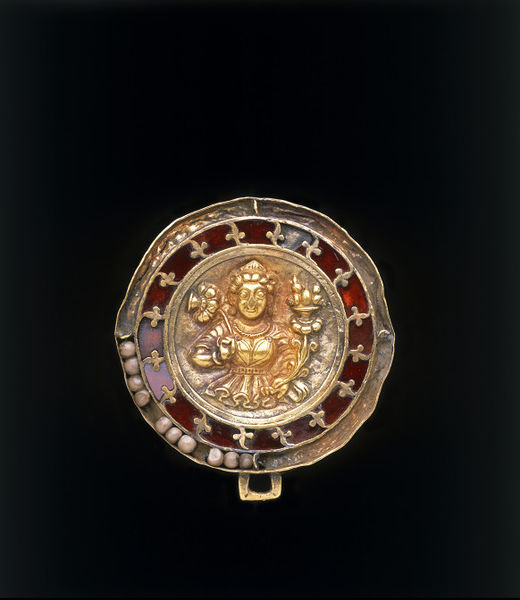