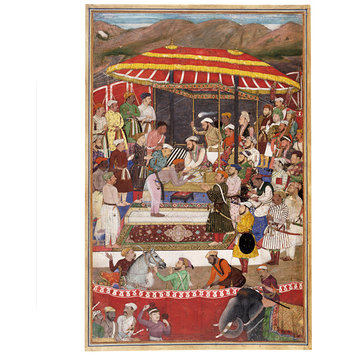 Maharana of Mewar and Prince Khurram

This scene, probably done between about 1615 and 1618, depicts the submission of the ruler of Mewar in Rajasthan to Shah Jahan, the son of the reigning Mughal emperor Jahangir (r. 1605-1627). The ruler, Rana Amar Singh, had long held out against the Mughal forces but after a lengthy campaign directed by Shah Jahan was forced to surrender in 1615. The artist, Nanha, has included himself kneeling at the right of the scene, sketching a portrait of the Rana. The picture was made to illustrate the Jahangirnama ("Book of Jahangir"), the memoirs written in Persian by Jahangir, as indicated by the catchword isolated against the white muslin jama of the man depicted in the bottom left hand corner, which would be repeated as the first word of the following page. Although Jahangir intended to have various illustrated copies made of his book, none are known to survive.

Painting, in opaque watercolour and gold on paper, Prince Khurram is at the centre of the composition, kneeling on a rectangular throne beneath a red and yellow canopy within an enclosure of red qanats (channels). The bare-footed Rana bows submissively before the prince, touching his knees as Mughal and Mewar nobles watch. Facing the Rana, kneeling on the ground to the right, the artist Nanha may be seen. In the foreground, outside the qanats, are four musicians on the left and an elephant with his rider on the right. Mountains fill the background, with a strip of blue sky above. This event took place at the Mughal encampment of Gogunda in Rajasthan. Within a tented enclosure, Khurram kneels on a golden throne. Most of the assembled Mughal and Rajasthani courtiers are identified by minute Persian inscriptions.

Most of the assembled Mughal and Rajasthani courtiers are identified by minute Persian inscriptions.

The event is described by Jahangir in the Jahangirnama, or Tuzuk-i Jahangiri. He recorded that it had taken place on Sunday, 26th of the month of Bahman (the 11th month of the Ilahi Calendar), in the 9th regnal year of the emperor's accession to the throne. The 9th regnal year started on 21st March 1614. The date of 26th of Bahman, 9th regnal year, corresponds to 22nd of February 1615.

Painting, submission of Rana Amar Singh to Shah Jahan in 1615, by Nanha, opaque watercolour and gold on paper, Mughal, ca. 1618 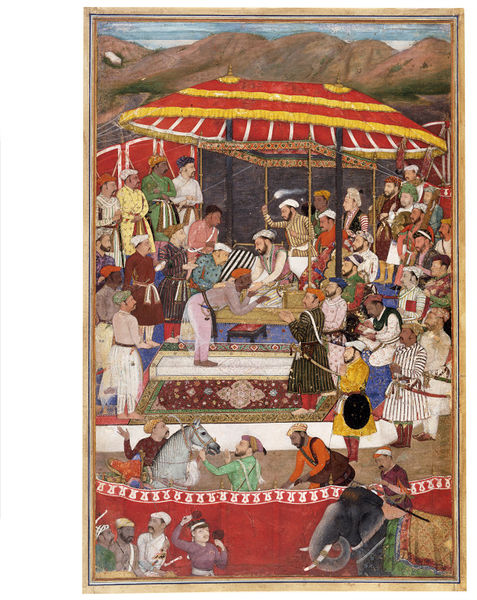