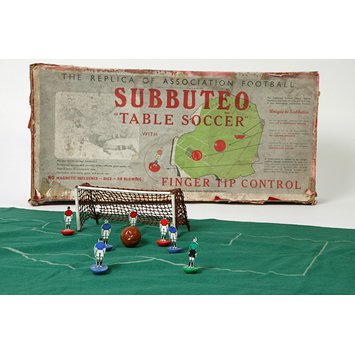 The first Subbuteo set was produced in March 1947 by Peter Adolph after an advertisement was taken out in the Boy's Own Paper the year before testing the idea of the game. Even though the concept had not yet been fully realised, the idea was based on an earlier football game, New Footy, developed in the 1920s.

The figures, known as "flats" were originally cut out from paper. This later developed into a press out format. From 1961 celluloid figures replaced the card versions. The idea of the game was to closely simulate the rules and moves of real football in a table top game with two full teams in coloured stripes, footballs, a pitch in the form of a mat and goal posts. The figures could be moved by flicking them into contact with the ball. The special and patented design of the bases (based on the shape of a rounded button) enabled the figures to remain upright throughout play.

The set contains 22 figures split into two colours, red and blue with two goalkeepers, one green and one yellow. The figures are made from a plastic base with a flat bottom and a slit in the top of the buttonlike form in which a printed card image of a footballer in white shorts and corresponding blue or red shirt, dependent on the team.

The goalkeepers are mounted on the same button-like bases but have an additional metal handle which is for manipulation of the figure through the goalposts and net. There are two brown plastic footballs and a range of rules and advertisements also included in the box.

'NO MAGNETIC INFLUENCE - DICE - OR BLOWING'

'The Subbuteo football player figures / reproduce the body swerves and ball play / of star Association footballers because / Unique to Subbuteo / are the lightweigth hemispherical plastic / bases OF A COPYRIGHTED DESIGN / flattened at the bottom from geometrically / curved sides consequently needing / NO LEADEN WEIGHTS. / smooth on top and at the edges diametrically / slotted to become the complete / FOOTBALLER FIGURE/ so constructed to remain in an upright / position during movement in play and / which will never come to an abrupt stop but / slowly spin to a standstill after avoiding / opponent men by weaving between and / around the with the ball at his feet.'

The first Subbuteo set was produced in March 1947 by Peter Adolph after an advertisement was taken out in the Boy's Own Paper the year before advertising the idea of the game, even though the concept has not yet been fully realised.

The figures, known as "flats" originally were cut out from paper, developing into a press out format. From 1961 celluloid figures replace the card versions.

Subbuteo was invented in England by Peter Adolph in 1947. It was based on an earlier table football game from the 1920s called New Footy. The Subbuteo trademark includes a bird of prey - the hobby. Peter Adolph wanted to call his game "The Hobby" but could not licence the name. The Latin name for the hobby is Falco Subbuteo. Over 500 million figures have been made since Subbuteo was launched. []