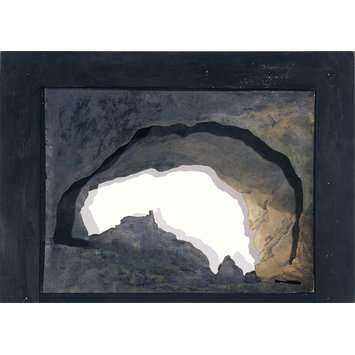 German artist Philip James de Loutherbourg (1740-1812) came to London in 1771. He was already an established artist when he was engaged by the actor, David Garrick, then manager of Drury Lane, as 'Superintendent of Scenery and Machinery'. De Loutherbourg's appointment marks a development in stage practice. In the 18th century theatre the designer of the stage settings and the scene painter who created them were usually one and the same, but De Loutherbourg insisted that he be employed as a designer, with the ability to appoint and supervise his own scene painters. The effect of having one person to oversee a production gave a greater scenic unity. De Loutherbourg began working at Drury Lane on a full-time basis in 1773 and, following Garrick's retirement in 1776, worked for his successor the playwright Richard Brinsley Sheridan.

Together Sheridan and De Loutherbourg created the pantomime The Wonders of Derbyshire; or, Harlequin in the Peak in 1779. The convoluted plot, which the reviewer of the Westminster Gazette summed up as 'absolutely contemptible', was only a excuse for a much applauded display of the designer's skills. Responding to the contemporary fascination with 'picturesque', De Loutherbourg visited Derbyshire to sketch the places subsequently re-created on stage. They included Chatsworth, Matlock and inner and outer views of Peak's Hole cavern at Castleton.

The model for the cavern is one of the oldest surviving theatre set models, made by De Loutherbourg as a guide for the painters and carpenters. The individual elements of the scenery are used to produce realistic perspective effects, with the double cut-cloths suggesting the vastness of the cavern and the free-standing boulders breaking up the foreground space. This was a significant step in the creation of stage scenery. The standard 18th century theatre set considered of regimented wing flats and painted backdrops which formed the background against which the action took place. Here De Loutherbourg brings the action downstage and allows the actors to move amongst the scenery.

At some stage in the model's history the original backdrop piece was lost and in 1928 a new backdrop was made. The model had yet to be identified and, believing it to represent a cave on the coast, the artist painted a seascape instead of the hills of landlocked Derbyshire.

This model was one of five set models by Philip James de Loutherbourg, acquired by the V&A in 1937. A note accompanying the model lists six parts of the 'Cave Scene': '2 Cut Clothes [sic] / 4 Rock pieces'). The original backdrop piece was missing and in 1928 a new backdrop was painted, apparently by the owner, Frank J. Arlton, although the signature on the painting appears to be F.T.A.

Set model by Philip James de Loutherbourg for Peak's Hole cavern in the pantomime, The Wonders of Derbyshire; or, Harlequin in the Peak, Drury Lane, 1779.

Victoria and Albert Museum, Department of Engraving, Illustration and Design and Department of Paintings, Accessions 1937, London: Board of Education, 1938.

Set model for The Wonders of Derbyshire; or, Harlequin in the Peak
1779

This is one of the oldest surviving set models.
De Loutherbourg, a landscape painter, revolutionised
scenography. Instead of symmetrical settings, he
achieved a greater realism and sense of perspective
with cut-cloths, ground-rows and strong contrasts of
lighting. Rather than paint the scenery himself, he
made models for carpenters and scene painters to work
from. This example conjures up the atmosphere of Peak
Cavern, with daylight filtering in from the entrance. 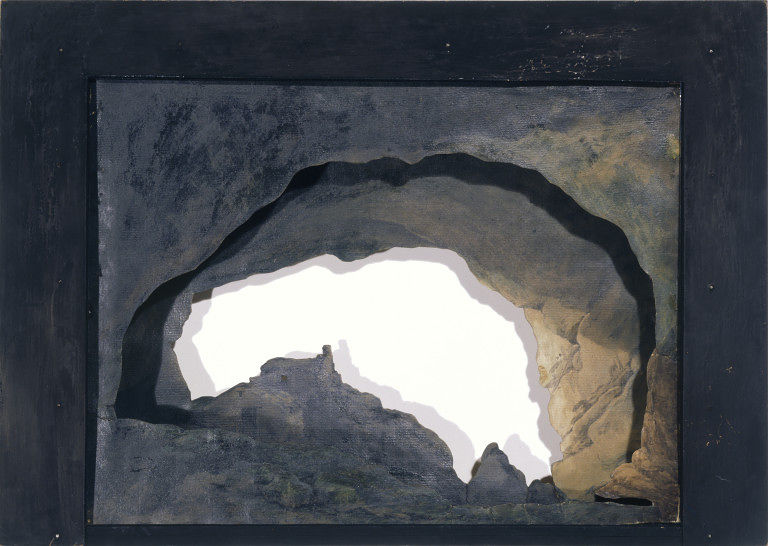