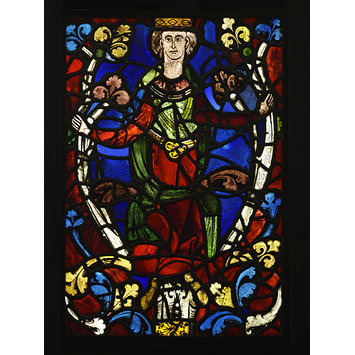 King from a Tree of Jesse

The king here cannot be identified as there are no surviving inscriptions naming him and there may not have been originally. Jesse Trees with their kings and prophets were produced in all forms of church art from the 11th century and throughout the medieval period. There was no standard convention for the depiction of the prophets and the kings.

Figure of a King with both arms extended sideways.

France (made)
Champagne-Ardenne (possibly, made)

At the time of acquisition, it was believed that this panel came from the Sainte Chapelle in Paris. This chapel was restored in the 19th century and some of the medieval windows were removed.

Some time before 1936 it was thought that the original location of these panels was Troyes Cathedral, possibly in the axial chapel.

This panel depicting an Old Testament King, and ten others in the museum' collections (Mus.nos. 5-E-1881 and 6-C and E-1881), formed part of 'Jesse Tree' windows. 'Jesse Tree' windows are a visual representation of Jesus Christ's genealogy which was traced back to Jesse, the father of the Old Testament Prophet/King David. These prophets announce the coming of Christ from the line of David and appear on the Tree accompanying images of Christ's royal ancestors. The whole window would have an image of Jesus Christ and his mother, Mary, on the top. At the bottom of the window would have been an image of Jesse from whom the genealogical Tree emerges.

This panel and another of a king in the museum (Mus.no.6E-1881) depict Kings from a 'Jesse Tree' window but were not originally part of this series of prophets.

Panel of clear, coloured and flashed glass with painted details and silver staining.. Depicting a king, from a Tree of Jesse window. French, probably from Champagne, c.1210-4, with later restorations. 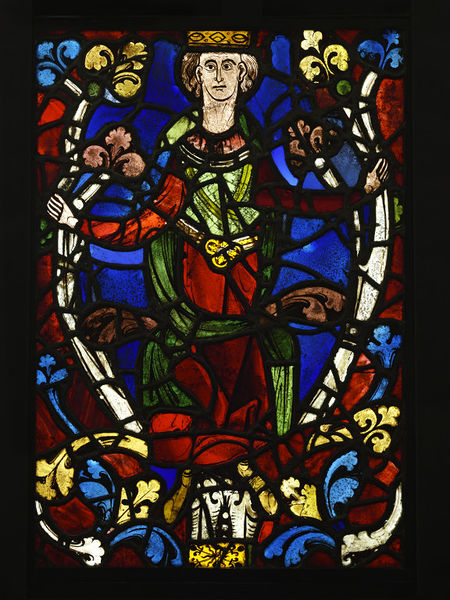