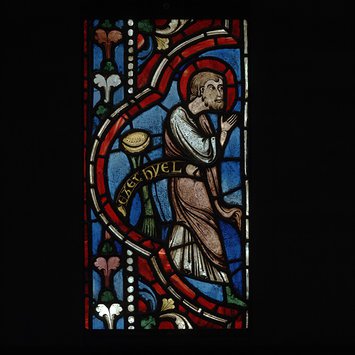 The prophet here can be identified by the name 'EZECHUEL' (Ezekiel). He lived in the 6th century BC and his prophecies are recorded in the Old Testament Book of Ezekiel. This prophet announced the triumph of the Kingdom of the Messiah and is thus intimately associated with the geneaology of Jesus Christ. Jesse Trees with their kings and prophets were produced in all forms of church art from the 11th century and throughout the medieval period. There was no standard convention for the depiction of the prophets and the kings.

The style of painting on this figure is the same as on those in panels 5E and 6 to 6B-1881. The facial features are full and rounded. The eyebrows are heavy and the eyes and pupils of the eyes are large. The clothing follows the form of the body. The figures' hair is straight and not curled. These figures are identified by their inscribed scrolls, have a large stemmed flower within the demi-quatrefoil they stand in and there are no small sections of ground between their feet. All of these feaures distinguish this group of prophets from the other group (5 to 5C-1881). Most of the prophet figures in this collection are paired, are mirror images of each other, indicating that each pair was made from the same cartoon or design drawing. 5D and 6C-1881 are exceptions and it is likely that there was originally a pair to each.

Full-length figure of a man with a full of head of long hair and a beard. His head is surrounded by a halo composed of red flashed glass. The figure is in profile facing the right side of the panel. His right arm and hand are raised and are indicating to the right. He is wearing a brown mantle over a white tunic. The mantle hangs down over his left shoulder and swirls out slightly in front of him to the right of the panel. The figure wears green boots or stockings. He holds a scroll in his left hand which crosses over his body and extends to the left of the panel. The scroll is composed of yellow glass with a thick matt black coat of pigment which has been scratched away with a fine stylus to reveal the letters:
E Z E C H U E L bordered top and bottom.

Panel of clear, coloured and flashed glass with painted details. Depicting the Old Testament prophet Ezekiel, from a Tree of Jesse window. Probably from Troyes Cathedral. Made in France (Champagne), c.1210-1245. 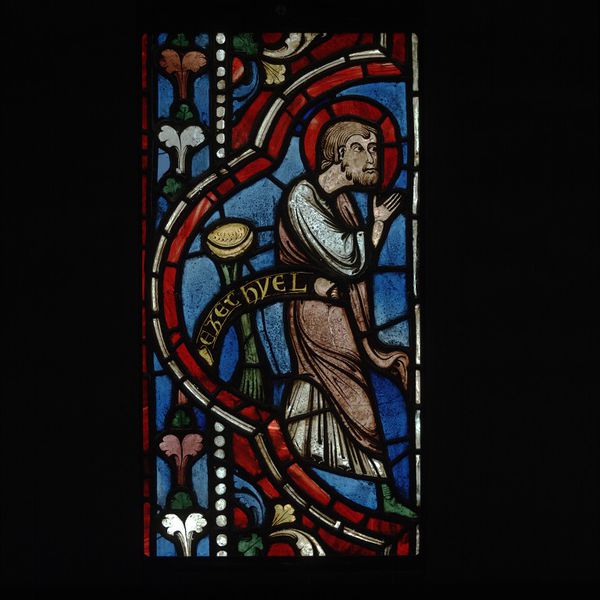