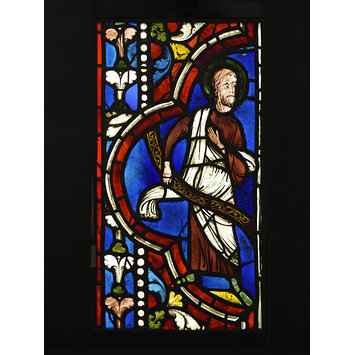 The prophet here carries a scroll with no inscription so he cannot be identified. Jesse Trees with their kings and prophets were produced in all types of religious art from the 11th century and throughout the medieval period and there was no standard convention for the depiction of the prophets and the kings. The style of painting on this figure is the same as on those in panels 5, 5A and 5C-1881. The facial features are thin and angular. The lines forming the eyebrows and eye sockets are painted in sharp arches. These features and the lack of inscriptions on their scrolls distinguish this group from the other panels in the series which have full, more rounded, facial features and bear inscribed scrolls. The whole figure in this panel is the reverse of that in no. 5C-1881 indicating that they were made from the same cartoon or design drawing.

Full-length figure of a man with a full of head of long hair and a beard. His head is surrounded by a halo composed of green glass. The figure is in profile facing the right side of the panel. His left arm rests across his chest and his right arm and hand are holding a scroll. He is wearing a purple-brown tunic, over which is a whte garment draped across his body and over his right shoulder. The figure wears green boots or stockings. He holds a long black scroll in his right hand which is stretched across his body. The scroll is composed of yellow glass with a thick matt black coat of pigment which has been scratched away with a fine stylus to reveal a floral frieze (rinceaux).
The figure is placed within a half quatrefoil. His left foot rests on top of the lower inner border of the quatrefoil and his right foot is placed across the lower inner border of the quatrefoil. There are floral sprays of blue, green, yellow and clear glass in the upper and lower spandrels of the quatrefoil. On the left of the panel is a vertical border of floral sprays composed of clear and brown glass. This border floral pattern is broken in the middle where it is dissected by the left projection of the quatrefoil. 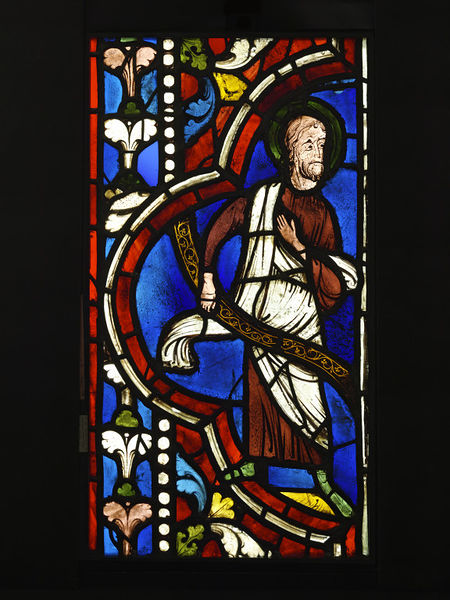