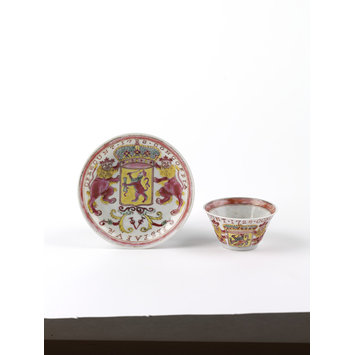 In the 18th century Europeans greatly admired the white and resistant body of Chinese porcelain, available at low cost, but in addition to traditional shapes and designs, they also ordered tableware and household objects made in imitation of western items or with specific decorative motifs, including coat of arms, monograms and inscriptions. The East India trading companies supplied Chinese potters of models and patterns from Europe to copy on undecorated porcelain.

The design on this cup and saucer copies the reverse of a Dutch silver ducatoon, or 'silvery knight', struck for the V.O.C. in 1728. Before 1726, there was no coinage minted specifically for circulation in the Indies, and official permission was only granted in 1728.

This tea set was probably made to celebrate the minting of the coin, or to commemorate the opening of a direct trade from the Netherlands to Canton, and not via Batavia, in 1728-29. The first ship to sail direct to Canton in 1728 had on board large quantities of silver coins, possibly the newly minted ones. The ship left Canton in 1730 with a cargo of tea and porcelain, probably including the tea services decorated with the ducatoon design. The five months between sailings would have given enough time to the enamellers at Canton to copy the design from the coins on undecorated pieces from Jingdezhen.

Cup and saucer, porcelain painted in overglaze enamels in the famille rose palette with the decoration of the arms of the Dutch Republic, and the monogram of the Dutch East India Company (Verenigde Oostindische Compagnie). Encircling with a motto and a date: "Concordia Res Parvae Crescunt 1728".

The design originates from a Dutch silver ducatoon, or 'silvery knight', struck for the V.O.C. at the Hoorn Mint of West Friesland, and at the Holland and Zeeland mints, in 1728. [See Boxer (1979:60) and Woodward (1974:94)] The minting of these coins was significant. Before 1726, there was no coinage minted specifically for circulation in the Indies, even though the Heeren XVII had made repeated requests for it to the States General. In that year (1726), the Company arranged for an illegal minting of silver ducatoons, but when this was discovered, the issue was melted down (at least none scurvies). Permission was eventually granted in 1728, when the above ducatoons were minted. The design on the porcelain comes from the reverse of the coin.

There are several possible explanations as to why the coin design appears on what is clearly a contemporary piece – or pieces - of Chinese porcelain. All the known pieces form part of tea services – teacups and saucers, teapots, teapot stand, and plates – and it seems probable that these tea sets were made to celebrate the minting of the coin, and/or to celebrate another occurrence in 1728-1729, that of the Company trading direct from the Netherlands to Canton, and not via Batavia. This was to last until 1734. The first ship to sail direct to Canton was the ‘Coxhoorn’, which set sail on 3 December, 1728, and arrived in Canton on 4th August, 1729 (see C.J.A. Jörg: Interaction in Ceramics, Oriental Porcelain and Delft Ware, p.86). On board were 3 tons of silver specie (Wood ward op cit p.99). This could well have been the newly minted ducatoons. The ship left Canton on 7th January, 1730, with a cargo of tea and 137 cases of porcelain (D.F. Lunsingh Scheurleer: Chinese Export Porcelain, p.61). Again, the porcelain could well have consisted of the tea services decorated with the ducatoon design. The five months between sailings would have been time enough for the enamellers at Canton to have copied the design from the coins on undecorated pieces from Jingdezhen, and the fact that all the known pieces are from tea services, sets of which were in great demand in Europe by this time and the shapes most likely readily available at Canton, increases the likelihood that these pieces were ordered, decorated and shipped within this short period of time.

In spite of Jörg thesis that wholesale porcelain decorating did not take place in Canton until about 1745-1750 (see: Jörg 1982: pp. 126-128), it can be argued that under certain circumstances, facilities for decorating porcelain would have been available much earlier than this. Enamelling on metal was already well established in Cantons, and such a process is not far removed from enamelling on porcelain. Secondly, as alluded to above, certain commonly available shapes (such as teacups and saucers), would not need special ordering from Jingdezhen. Thus in all probability, the ‘ducatoon’ pieces did return on the Coxhoorn’s first voyage in 1730. Like the porcelain wares with political and social decoration, the subject matter would have had only a limited life of topical interest. Speed would have surely been a necessity.

Armorial porcelain. Porcelain cup and saucer, decorated in overglaze enamels in the famille rose palette with the Arms of Holland and a cipher of the Dutch East India Company, China, Qing dynasty, Yongzheng period, ca. 1728. 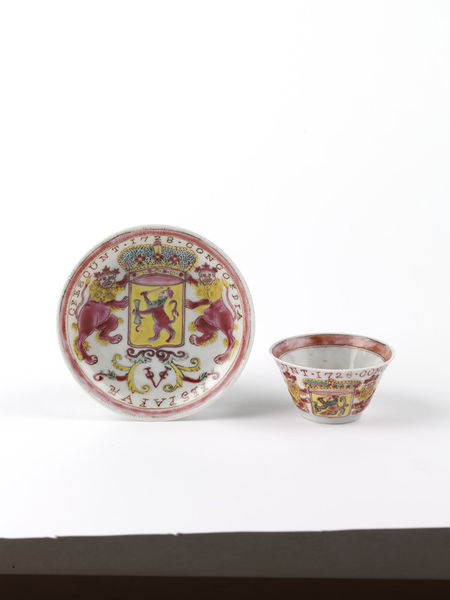