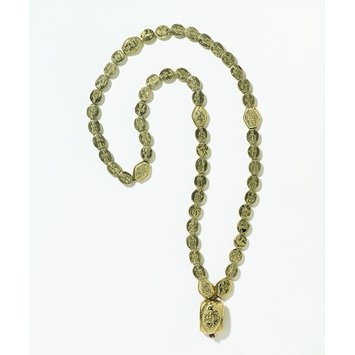 Rosaries were in use from the 13th century. They came in many different forms, with various ways of saying the 'Hail Mary' ( Ave Maria) and 'Our Father' (Paternoster) prayers. Their form, and the order in which the prayers were said, became standardised during the 15th century. The Langdale rosary dates from around 1500 and is the only medieval English rosary to have survived the Reformation. It is also one of the few medieval rosaries in Europe to be made of gold. The gold is enamelled. The rosary consists of 50 oval 'Ave' beads, 6 lozenge-shaped 'Paternoster' beads and a large rounded knop (knob). Each bead is engraved with two saints or scenes, with the titles written around the edges in black letter.
During the Reformation, rosaries, as part of the cult of the Virgin Mary, were frowned upon. Opposition to the Reformation in England was fiercest in remote places like Cornwall and the north of England, but it is rare for tangible evidence such as this rosary to survive.
It is exceptional to be able to link such evidence to individuals.This rosary was owned from the 17th century until 1934 by an old Roman Catholic family, the Langdales of Houghton Hall in Yorkshire. It is thought that it may once have belonged to Lord William Howard (1564-1640), third son of Thomas, 4th Duke of Norfolk (1536-1572). The Duke, a devout Roman Catholic and an ancestor of the Langdales, was attainted for treason and beheaded in 1572. The rosary has two extra beads, added around 1600. They depict three St Williams - of Norwich, of Rochester and of Maleval - and St Endellion, a little known Cornish saint. This choice of saints points to a link with Howard's friend, Nicholas Roscarrock (about 1584-1634), a Cornish Catholic and author of Lives of the Saints. Roscarrock's book includes a life of St Endellion. It seems likely that the rosary was owned by Lord William Howard and modified under his patronage, because it depicts several of his name saints as well as the saint dear to Roscarrock. Modifying the rosary would have been quite simple since medieval rosaries varied greatly and could have any number of beads.

The Langdale Rosary, gold, enamelled, comprising 50 oval-shaped 'Ave' beads ('Ave Maria': 'Hail Mary'); 6 lozenge-shaped 'Paternoster' beads ('Pater Noster': 'Our Father'); one pendant oblong knop. Each bead is engraved and enamelled on each side, with depictions of a saint or episode from the life of the Virgin or Christ, with the titles inscribed around the edges in black lettering. The pendant knop is four sided, and on each side are scenes from the Virgin and Child and Three Magi.

The Langdale Rosary
About 1500, with late 16th-century additions

Each of the beads shows a saint, some 95 in all, or an event from the lives of the Virgin Mary and Christ. While reciting the relevant prayers, the user could appeal to the Virgin and saints to intercede with God on their behalf. Rosaries were banned in England in 1547, during the Reformation, but Catholics continued to use them in secret.

Gold, engraved and enamelled in black

Previously owned by the Langdale family

Bought with the assistance of the Murray Bequest

Museum no. M.30-1934 []
British Galleries:
Rosaries were used by Roman Catholics to recite a cycle of prayers of five 'decades', each consisting of ten 'Hail Mary's, separated by one 'Our Father'. These aids to personal devotion were forbidden by legislation of 1547. This very rare survival had two extra beads added in about 1600, which shows they were used by someone who continued to practise as a Catholic. [27/03/2003]
Gothic
Two rosaries

People used a rosary when reciting prayers to the Virgin Mary, or saying the Lord's Prayer. Ten beads were used for the former and one for the latter. Wooden rosaries were commonplace, but gold ones less so. This gold rosary is a unique survival from medieval England. Each bead is enamelled with a saint or a scene from the life of Christ and engraved with the appropriate title. 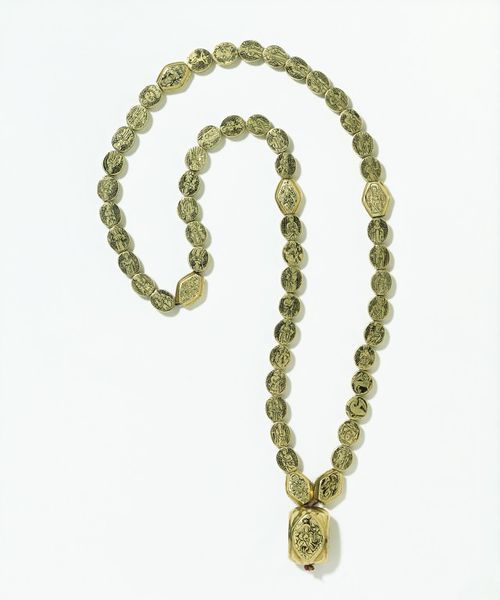