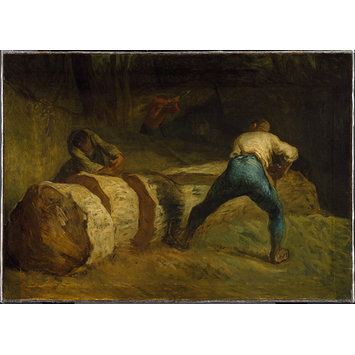 Jean-François Millet (1814-1875) was born in Normandy and first trained with a local portrait painter, Bon Du Mouchel (1807-1846), and later in Cherbourg with Lucien-Théophile Langlois (1803-1845), a pupil of Antoine-Jean Gros (1771-1835). In Paris, he then entered the atelier of the history painter Paul Delaroche (1797-1856). He first specialised in portraiture and then moved towards the naturalistic style with peasant scenes for which he became best known.

This painting is a fine example of Millet's peasants scenes for which he is best known. It depicts two men sawing a large trunk while another is chopping trees in the background. Although considered as a member of the Barbizon school for its technical approach of the rendering of light and colours, Millet favoured figures paintings to landscapes. His rural scenes are taken for the contemporary reality and are often interpreted as a reaction against a society that was becoming more and more bourgeois thanks to the industrial revolution.

Two figures holding either end of a wood saw are sawing a large tree trunk; a third figure chopping trees in the background.

Most likely the same as the painting titled Wood cutters in a French forest shown at the in London June 1871 at the ‘Second…Exhibition of … The Society of French Artists’ organised by the dealer Durand-Ruel; probably bought from Durand-Ruel by the Scottish art critic W.E. Henley around that time; probably sold directly to Constantine Alexander Ionides with whom Henley was acquainted (cf. letter from Henley to Ionides, 13.06.1883, NAL :86.ZZ.182, MSL/2006/132). Ionides had purchased CAI.47 by November 1881, when it is listed in the inventory of his collection (private collection), with a valuation of £1200; bequeathed by Constantine Alexander Ionides, 1900.

In 1881, W. E. Henley wrote Jean-François Millet: twenty etchings and woodcuts reproduced in fac-simile and a biographical notice in which this painting surprisingly does not figure. Henley was also the author of the catalogue of the French and Dutch Loan Collection exhibition at the Edinburgh International Exhibition of 1886.

Historical significance: This painting is a fine example of Millet’s peasant scenes executed in a free, broad technique characteristic of the Barbizon school. The present painting depicts two wood sawyers seen from the back while a strong contrast of light and shade emphasizes the strain of the figures to cut the wood while a third figure chops trees in the background.
There are two preparatory drawings in black chalk for this composition: one is in the Musée Bonnat, Bayonne, dated 1850-1 (Herbert, 1962) and another in Plymouth City Art Gallery. Two further studies possibly related were exhibited at the Leicester Galleries in November 1921 (nos. 94 & 98). According to Kauffmann (p.74), there are possibly two other versions: one is in a private collection, Paris whereas the other’s whereabouts remain unknown (authenticity disputed – see Der Kunstwanderer, 1928, p. 75 illus.).
Millet seems to have painted this vigorous scene soon after he moved to Barbizon, a village near the forest of Fontainebleau, which attracted a number of artists painting in a broad naturalistic style. The intense colours put this painting close to Honoré Daumier’s oeuvre, for which it has been mistaken once (M. Gobin, oral opinion, 1936).
Three colours dominate the earthen palette: the intense blue of the near sawyer’s trousers, his brilliant white shirt and the red of the third figure in the background. This colour scheme combined with the emphasis put on the strain of the figures may convey a political meaning. For instance, the Winnover, The National Gallery, London, exhibited at the Salon in 1848, has been interpreted as an allusion to the Revolution of February that year through the colours worn by the figure, blue, white and red, and the subject matter, separating the grain from the chaff.
X-ray photography shows that the scene was painted over an earlier composition, most likely the lost oil sketch for The Republic, unsuccessfully submitted by Millet at a French state competition in 1848. Around this time, Millet made two other sketches entitled L’Egalité and La Fraternité stylistically compatible with the underlying composition.
Whether this picture was a rural interpretation of a former political composition or not remains uncertain but the peasant scenes in se were not exempt of a certain socio-political connotation. The Barbizon members as well as the Realist painters and their critics did not hide their preference for anti-bourgeois subject matters and reaction against the tradition. Millet’s art was highly influential on both technique and subject matters of the next generation of artists including the Impressionists and Post-Impressionists.

19th-century French art is marked by a succession of movements based on a more or less close relationship with nature. At the beginning of the century, Romantic artists were fascinated by nature they interpreted as a mirror of the mind. They investigated human nature and personality, the folk culture, the national and ethnic origins, the medieval era, the exotic, the remote, the mysterious and the occult. This movement was heralded in France by such painter as Eugène Delacroix (1798-1863). In its opposition to academic art and its demand for a modern style Realism continued the aims of the Romantics. They assumed that reality could be perceived without distortion or idealization, and sought after a mean to combine the perception of the individual with objectivity. This reaction in French painting against the Grand Manner is well represented by Gustave Courbet (1819-1877) who wrote a ‘Manifesto of Realism’, entitled Le Réalisme published in Paris in 1855. These ideas were challenged by the group of the Barbizon painters, who formed a recognizable school from the early 1830s to the 1870s and developed a free, broad and rough technique. They were mainly concerned by landscape painting and the rendering of light. The works of Narcisse Virgile Diaz de la Peña (1807-1876), Jules Dupré (1811-1889), Théodore Rousseau (1812-1867), Constant Troyon (1810-1865) and Jean-François Millet (1814-1875) anticipate somehow the plein-air landscapes of the Impressionists. 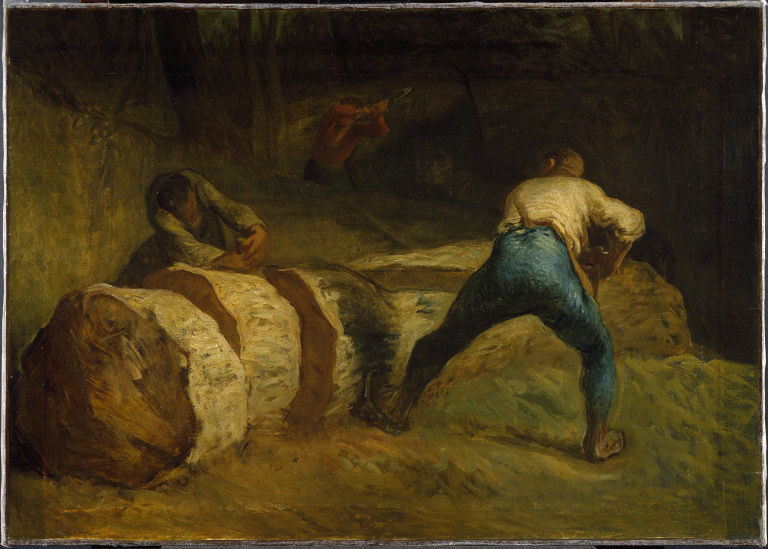