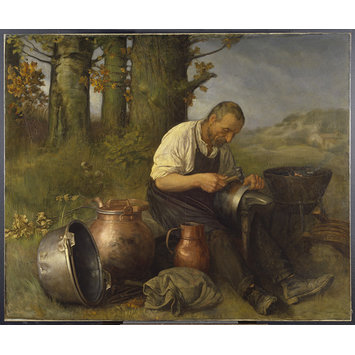 Alphonse Legros (1837-1911) was born in Dijon where he entered the Ecole des Beaux Arts before attending the ‘Petite Ecole’ of Horace Lecoq de Boisbaudran (1802-1897) in Paris and then Ecole des Beaux-Arts. He started exhibited at the Salon in 1857. In 1863, Legros visited London where he found admirers and patrons, notably the Ionides family, and was ardently promoted by the brothers Dante Gabriel Rossetti and William Michael Rossetti. An etcher, a painter and a sculptor, he succeeded Edward John Poynter (1836-1919) at the Slade School in 1876 and was naturalized as a British citizen in 1880.

This work is a fine example of Legros’ genre paintings of the 1870s. It depicts a French tinker repairing one of his cauldrons in an open landscape. The subdued palette and earthen tones dominated by blue and green hues as well as the subject matter are indebted to the French Realist movement and in particular to the art of Jean-François Millet (1814-1875).Legros’ genre scenes were particularly praised at the time by British collectors with at the front line C. A. Ionides who purchased many of his works.

In the centre a French tinker seated on a bank and turning towards the right in the act of repairing a metal vessel; on the left foreground large copper pots are lying on the ground; in the background trees on the left, a cottage on the top of a hill on the right.

A. Legros
Signed on the right.

Royal Academy 1874, no. 24 <u>Un Chaudronnier<u/>; Probably purchased from Legros by Ionides in 1874, since he already owned it shortly after Legros moved to Brook Green that year (cf. undated letter in a private collection from Legros to Ionides, requesting an outstanding payment of £40 still due for it.); Listed as <u>Un Chaudronnier<u/> by A. Legros in Ionides' inventory of November 1881, valued at £600; bequeathed by C.A. Ionides, 1900.

Ref: Basil S. Long, Catalogue of the Constantine Alexander Ionides collection.Vol. 1, Paintings in oil, tempera and water-colour, together with certain of the drawings, London : Printed under the authority of the Board of Education, 1925.
C. Monkhouse, ‘The Constantine Ionides Collection’ in Magazine of Art, vii, 1884, pp. 36-44, 208-214.

Historical significance: This painting is a fine example of Legros' genre scene. It was originally titled Le chaudronnier ou le rétameur de campagne. It depicts a French tinker repairing a cauldron in an open landscape. This subject matter is typical of 19th-century French Realist paintings based on the impartial observation of contemporary life and popular imagery.

T. Wilcox suggests that this type of paintings responded to a double concern in Legros' career. On one hand, it reflects his interest in the ideas of Thomas Carlyle (whos portrait he engraved twice) and in socialism; it also draws upon Millet's famous peasant scenes which were often exhibited in London from 1870 onwards.

'Genre painting' describes scenes of everyday life set in domestic interiors or in the countryside, especially those produced by 17th-century Dutch painters such as Gerard ter Borch, Jan Steen, and Pieter de Hooch. These subjects were not particularly popular with Italian and French artists before the 18th century. Even then, Italian genre painting is mainly restricted to works produced by Northern artists active in Bologna and the Veneto such as Giuseppe Maria Crespi (1665-1747), Giovanni Battista Piazzetta (1682-1754), Pietro Longhi (ca. 1701-1785) and Giacomo Ceruti (1698-1767). In this pre-Enlightment society, issues of social class, the legitimacy of power and the needs of common people were beginning to be discussed in Holland, England and France and the debates were slowly filtering down to Italy. Bolognese intellectual life was particularly active and Crespi, who was corresponding one of the most notable academics, Antonio Muratori (1672-1750), appears to have created a visual response to these debates. The works of the Bamboccianti, mostly Netherlandish painters specialising in low-life paintings, painted in Rome in the mid 17th century, may also have provided a source for Italian genre painters while the commedia dell'arte profoundly inspired Crespi and the development of this new Italian version of genre painting. From Bologna the genre spread to Venice thanks to Venetians artists such as Piazzetta and Longhi. They drew the attention of foreign collectors, most notably Joseph Smith the British Consul in Venice, who amassed an impressive collection of such artworks and of Venetian art in general and contributed to the growing taste for these in England. In France, the genre was mainly introduced in the second quarter of the 17th century by the Le Nain brothers, especially Antoine and Louis, whose works still pose problems of individual identification. Genre paintings would be reactivated during the 19th century when artists such as Gustave Courbet (1819-1877) whose art was based on the impartial observation of contemporary life. 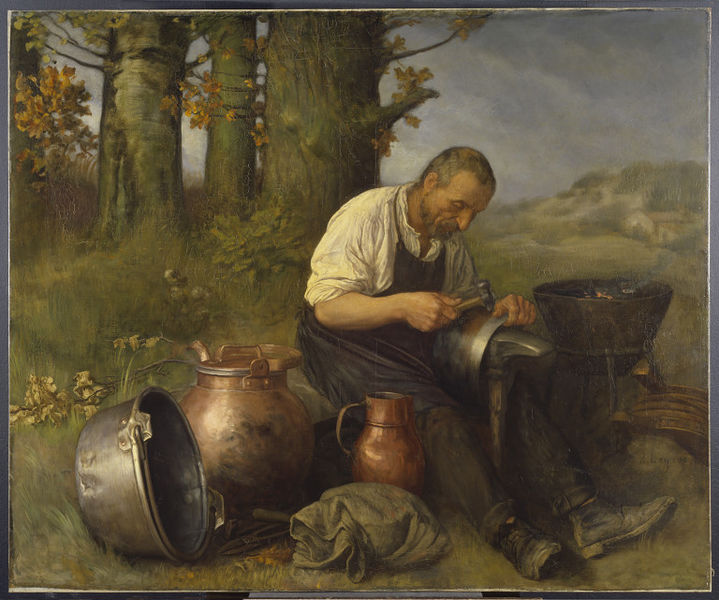