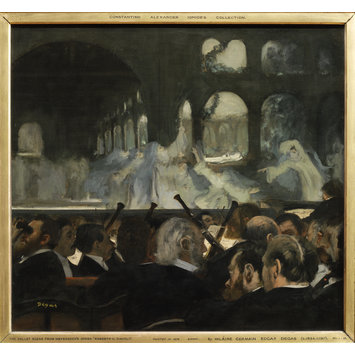 Edgar Degas (1834-1917) was born in Paris where he entered the studio of Louis Lamothe (1822-1869), a former pupil of Ingres, in 1854, before attending the Ecole des Beaux-Arts. He completed his artistic training with a three-year journey in Italy and specialised in contemporary subjects upon his return to France. His work is characterised by a wide range of media (drawings, prints, pastels, paintings and sculptures) and shares many components with the Realist and Impressionist movement even though he remained quite independent. At the end of his life he was regarded as a major artistic figure.

This painting is a fine example of Degas' opera scenes. It depicts the final act of the Romantic opera Robert le Diable when deceased nuns come back to life and execute some bacchanal dance. The scene is depicted from behind the orchestra and the first rows of spectators among whom can be recognised some friends of the artist. This compositional idea is quite typical of Degas and is recurring in several stage representations. Although Degas was close to some Impressionist painters, he rather defined his work as realist.

In the background, spectral figures dancing on a large stage decorated with a series of arched windows opening onto a cloister; in the foreground, the orchestra stalls and first rows of spectators.

Historical significance: This painting depicts a ballet scene from Giacomo Meyerbeer's (1791-1864) opera, Robert le Diable, a spectacular Romantic opera based on a chivalric romance which premiered on 21 November 1831. This semi-historical opera had a considerable success and was still performed 40 years later when Degas devised this composition. His first, rather smaller and more vertical version of this painting (66 x 54.3 cm), dated 1871, belonged to Mrs H.O. Havemeyer, who bequeathed it to the Metropolitan Museum of Art, New York (29.100.552) in 1921.

The painting depicts one of the final scenes when a company of deceased nuns come back to life and try to tempt the main protagonist, Robert. However the artist here focuses more on the accompanying musicians in the ground-floor box and the first rows of the audience rather than on the scene itself. The relatively stiff attitute of the figures in the foreground contrasts with and therefore enhances the sense of movement of the dancing nuns.

Among the figures in the foreground, one can recognise the collector Albert Hecht, on the far left holding his opera glasses, next to the bassoonist Désiré Dihau, who appears in the exact same position in another painting (California palace of the Legion of Honor-1952.69). The bearded figure seen from behind towards the right is the amateur painter Vicomte Lepic.

Walter Richard Sickert (1860-1942), who specialised in scenes from London music halls, probably knew this painting, which on its bequest to the V&A in 1900 became the first painting by Degas to enter a public collection in Britain.

19th-century French art is marked by a succession of movements based on a more or less close relationship with nature. At the beginning of the century, Romantic artists were fascinated by nature they interpreted as a mirror of the mind. They investigated human nature and personality, the folk culture, the national and ethnic origins, the medieval era, the exotic, the remote, the mysterious and the occult. This movement was heralded in France by such painter as Eugène Delacroix (1798-1863). In its opposition to academic art and its demand for a modern style Realism continued the aims of the Romantics. They assumed that reality could be perceived without distortion or idealization, and sought after a mean to combine the perception of the individual with objectivity. This reaction in French painting against the Grand Manner is well represented by Gustave Courbet (1819-1877) who wrote a 'Manifesto of Realism', entitled Le Réalisme published in Paris in 1855. These ideas were challenged by the group of the Barbizon painters, who formed a recognizable school from the early 1830s to the 1870s and developed a free, broad and rough technique. They were mainly concerned by landscape painting and the rendering of light. The works of Narcisse Virgile Diaz de la Peña (1807-1876), Jules Dupré (1811-1889), Théodore Rousseau (1812-1867), Constant Troyon (1810-1865) and Jean-François Millet (1814-1875) anticipate somehow the plein-air landscapes of the Impressionists. This new interest also extended to genre painting and urban modern life. 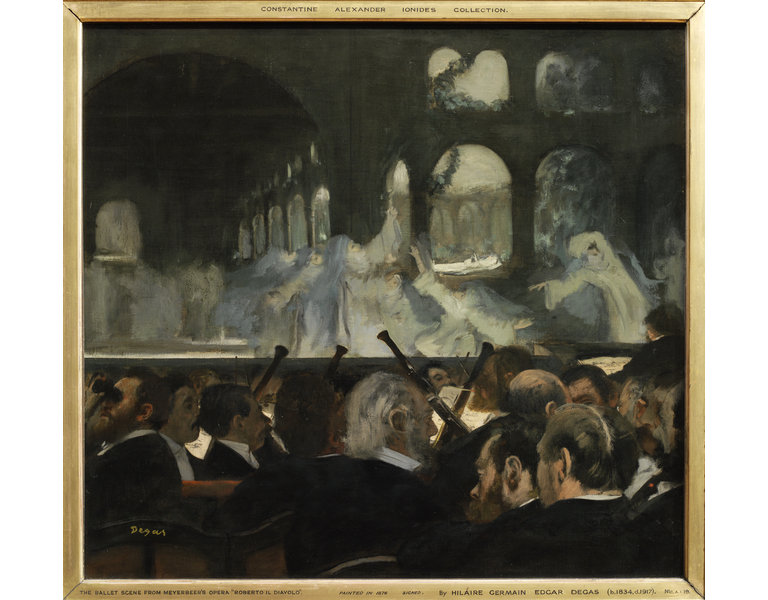