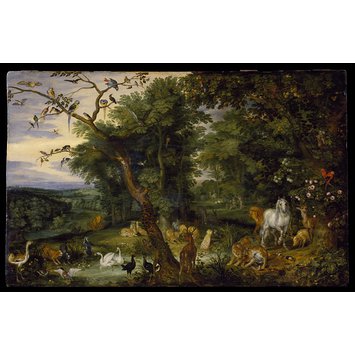 The Temptation in the Garden of Eden

Jan Bruegel the Elder (1568-1625) was the second son of Pieter Bruegel the Elder (ca. 1525-1569) and received his training from his maternal grandmother, Mayken Verhulst, and Pieter Goetkindt (died 1583) because of the early death of his father. In the 1590s, he travelled to Italy where he met his lifetime patron, Cardinal Federico Borromeo (1568-1631), archbishop of Milan and returned to Antwerp shortly before 1597, where he became a member of the Guild of St Luke. In 1606, Jan Bruegel the Elder became court painter to Archduke Albert and Archduchess Isabella, the regents in the southern Netherlands and travelled in Holland with friends Peter Paul Rubens (1577-1640), Heindrick van Balen (1575-1632) and visited Hendrick Goltzius (1558-1617) in Haarlem. Among his pupils were his son, Jan Bruegel the Younger (1601-1678) who imitated his father's work and Daniel Seghers (1590-1661).

This painting is a good example of Jan Bruegel the Elder's landscape tradition that shows in colourful landscapes, a profusion of animals and figures including rich and varied vegetation. The highly detailed depiction of the animals and other figures witnesses his interest in nature and reveals his encyclopaedic conception of the world. This composition was very popular and was extensively copied by Jan Bruegel the Elder's himself but also by close followers among whom could be his own son, Jan Bruegel the Younger. The representation of paradise as a pictorial theme was extensively exploited by the artist who produced many versions of it.

The Garden of Eden at the edge of a wood with colourful animals in the foreground, a valley receding into distance on the left and the Temptation in the background on the right.

Historical significance: Jan Bruegel the Elder (1568-1625) was called 'velvet' for the delicacy of his brushwork and was famous for his atmospheric landscapes and riverscapes, illustrating a wide range of mythological, allegorical and biblical subjects as well as genre scenes and flowers pieces. This painting is a good example of his favourite subject matter: the Paradise as no less than 106 paradise landscapes are indeed attributed to Jan Bruegel the Elder including several versions of Noah's Ark and Adam and Eve in the Garden of Eden. The scene is taken from the Book of the Genesis in which it is said that a male and a female of every species, including the human, were present in the Garden of Eden. This work witnesses Jan Bruegel the Elder's ability to highly detailed and close depiction from life encyclopaedically displayed. The vegetation as well as some animals have sometimes been read emblematically. For instance, the lion is a symbol of Jesus Christ and resurrection, that echoes by contrast the scene of the Temptation and the forthcoming fall of Man that takes place in the background; the stag is an image of Good and a symbol of the soul eager to reach the divine; the bull is an allegory for patience and the sacrifice of Christ; the rose alludes to the purity of the Virgin Mary, the grape is an of Eucharistic symbol while the apple announces the redemption, etc. Many of these animals can be found in the same or reversed posture in Jan Bruegel's other versions of the theme. For example, the white horse is painted in reversed in the Galleria Doria Pamphilj's version. This painting reveals Bruegel's close observation of nature and his desire to demonstrate God's greatness through its pictorial representation, a will that is manifest in his correspondence with his lifetime patron, Cardinal Federico Borromeo.

Landscape paintings, i.e. the artistic representation of nature in terms of physical "view", were extremely popular during the 17th century and increasingly encompassed a variety of forms and genres. Flemish landscape tradition was already well developed in the mid 16th century with such artists as Pieter Bruegel the Elder (ca. 1525-1569) and Gillis van Coninxloo (1544-1607) who used to place small figures from mythological, biblical and historical subjects in the foreground. Based on a close observation of nature, most of these landscapes are paradoxically imaginary as they were conceived as resulting from an intellectual construction, a concept explained in the Flemish 'Vasari' Karel van Mander's Grondt der Edel vry Schilder-const (Principles of the noble art of painting) in 1604. This does not exclude a second tradition of landscape founded on a more direct approach to nature which great innovator was Hieronymus Cock (ca. 1510-1570) and that would particularly spread in the northern Netherlands, that is Holland, after the Eighty Years' War (1568-1648). By the later 16th century indeed, traditional artistic ties between northern and southern Netherlands, i.e. Holland and Flanders, changed radically as many Flemish artists such as for instance Gillis van Coninxloo and Jacob de Gheyn II (1565-1629) both from Antwerp, Roelandt Savery (1576-1639) and his brother Jacob the Elder (ca.1545-1602), natives of Coudrai, emigrated to Holland.

Oil painting, 'The Temptation in the Garden of Eden', Jan Brueghel the Elder, ca. 1600

C.M. Kauffmann, Catalogue of Foreign Paintings, I. Before 1800, London: Victoria and Albert Museum, 1973, p. 49-50, cat. no. 51.
Summary catalogue The National Gallery, London, 1929, no. 1881
A catalogue of the National Gallery of British Art at South Kensington with a supplement containing works by modern foreign artists and Old Masters, 1893, p. 76.
Evans, M., The Painted World. From Illumination to Abstraction, London, 2005, p. 56 illus.
Brion, Marcel, Old masters and the Bible: the Bible in art and archaeology, Jerusalem, Israel Museum, 1965 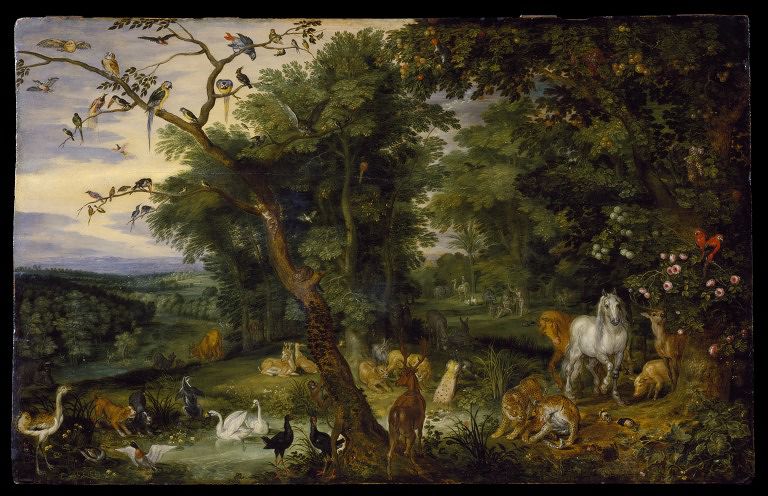