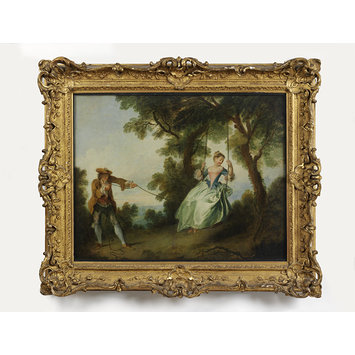 Nicolas Lancret (1690-1743) was born in Paris where he first trained as an engraver before becoming the apprentice of the history painter Pierre Dulin (1669–1748), and enrolled as a student at the Académie Royale de Peinture et de Sculpture. He later entered the workshop of the genre and decorative painter Claude Gillot (1673-1722), who had been Watteau’s master (1684-1721). He specialised in the genre of the fêtes galantes inaugurated by Watteau and decorative works for which enjoyed a considerable success.

This painting is a fine example of Lancret’s production of genre paintings showing elegant figures in an outdoor setting. The present picture shows a young lady pulled on a swing by a young man on the edge of a wood and evokes an amorous encounter. These lascivious scenes were often depicted to ornate rooms’ panelling or piece of furniture. Lancret’s genre paintings, influenced artists as diverse as François Boucher (1703-1770), William Hogarth (1697-1764) and Thomas Gainsborough (1727-1788).

An elegant lady on a swing helped by a young man on the left hand-side in a romantic wood dominating a valley.

This painting, entitled L'escarpolette (i.e. 'the swing'), shows a young lady pulled on a swing by a young man on the edge of a wood. The swing is a recurrent thematic in Lancret's oeuvre and a similar scene formed once the best known decorative ensemble of a series of nine paintings commissioned for the Hôtel de Boullongne in Paris, currently in the Indianapolis Museum of Art.

X-ray examinations revealed traces of decorative framework on all four sides suggesting that the present painting was also originally part of a decorative scheme.
This painting is a fine example of 18th-century pastoral scenes, which present elegant figures in garden or wooded settings.

These scenes, called 'fetes galantes' in French, constitute a genre inaugurated by Antoine Watteau at the beginning of the 18th century. They often include figures dressed in commedia dell'arte costumes and evoke a lascivious aristocratic world. Because of their intimate and often ambiguous subject matter, these pictures were also used as decorative compositions inserted in architectural structures or pieces of furniture.

The theme of the swing was common in 18th-century French painting and appears as an implicit allusion to carnal love. Another example of the same subject by Lancret with more figures is in the Hermitage, St Petersburg while The Swing by Jean-Honoré Fragonard (London, Wallace collection)may be the most famous 18th-century illustration of the theme. 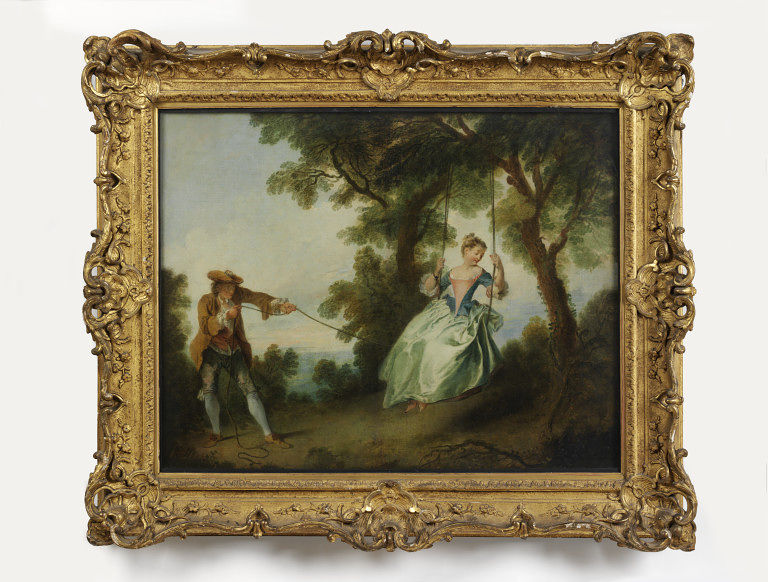