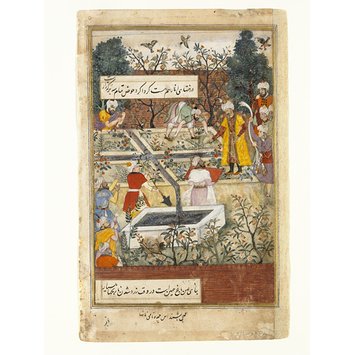 This painting from the Baburnama, or history of Babur, is the right half of a double-page composition (the left-hand page is Museum no. IM.276A-1913). It depictsthe Mughal emperor Babur (1483–1530) superintending the laying-out of the Garden of Fidelity at Kabul in the northern reaches of the Mughal empire, now in Afghanistan. Originally a Timurid prince in central Asia, Babur seized Kabul in 1504 and used it as a base for campaigns into Hindustan, where he founded the Mughal dynasty. The Garden of Fidelity (Bagh-e Vafa) was the first of many gardens he created. Situated to the south of Kabul, it was divided into quarters, fringed with orange and pomegranate trees and surrounded by a wall. The image shows the red sandstone wall and gateway of the garden, outside which the emperor’s horse and retinue are waiting. Akbar (r. 1556-1605) ordered his grandfather's memoirs to be translated from their original Turki into Persian, the pre-eminent language of the court and the administration of the empire, so that they could be widely read. The definitive copy was completed by 1589, and at least five illustrated copies were produced in the royal House of Books. This page comes from a dispersed copy that dates to about 1590.

Painting, in opaque watercolour on paper, Baburnama illustration, Babur supervising laying out of a Kabul garden, by Bishndas. Babur is depicted on the right, facing left, in a yellow short-sleeved coat over a red jama and wearing white turban gesturing towards the gardeners. A servant holds a white sash, an emblem of royalty, above the emperor's shoulder. A man with a squared red board stands between the emperor and a square enclosure for the water course that divides the garden in four. Gardeners stand poised for action; a man holds a string along the watercourse that is held at the other end in the other side of the composition (IM.276A-1913). The garden is enclosed by a red brick wall and filled with pomegranate and other trees, and flowering plants.

amal-e Bishndas chehreh mami nanha
work [=painting] [by] Bishndas; portraits [by] Nanha.
The artists are mentioned in the inscription beneath the painting in the lower margin. There is a faint "50" in red ink to the right. The painting illustrates a section of Persian text running across both pages of the composition towards the top and bottom.

Painting, Baburnama illustration, Babur supervising the laying out of a Kabul garden, by Bishndas, opaque watercolour on paper, Mughal, ca. 1590 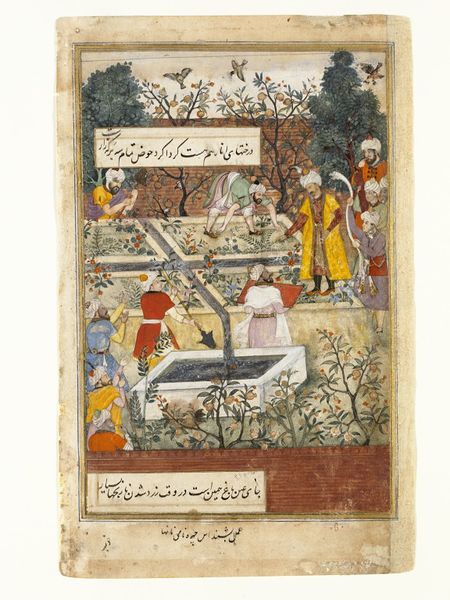