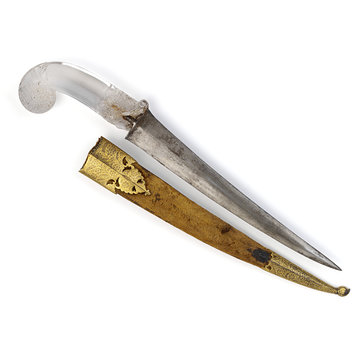 This 18th century Mughal dagger, with its finely decorated hilt, would most probably have been made as much for appearance as for functionality. Although the colourless clarity of the rock crystal would have enhanced the appearance of the dagger, the weight of the hilt would also have helped to counter-balance the steel blade. A major disadvantage would have been that sharp impacts to the hilt could have resulted in severe damage to it, possible sufficient to render the dagger unusable without a replacement hilt.

A dagger and sheath. The dagger has a double-edged, gently-curved steel blade that has been set into a hilt with a pistol grip. The hilt has been fashioned in clear, colourless rock crystal with scroll-shaped quillons - one of which has been broken off (the two fragments are present in a separate bag, as of 03/03/2016, previously unassociated). The hilt has been decorated with multi-petalled flowers, leaves and fronds carved in low relief on and around the pommel and the quillons, with the middle part being left unadorned. It has a good overall polish.
The sheath is gently-curved and is covered in a worn, brownish beige velvet over a wooden carcass. The sheath has a pierced, gilt metal throat and chape both of which have been covered with pointillé decoration of flowers and leaves. There is a flattened finial at the very tip of the chape and there is a break to the underlying carcass which allows the chape to move sideways. 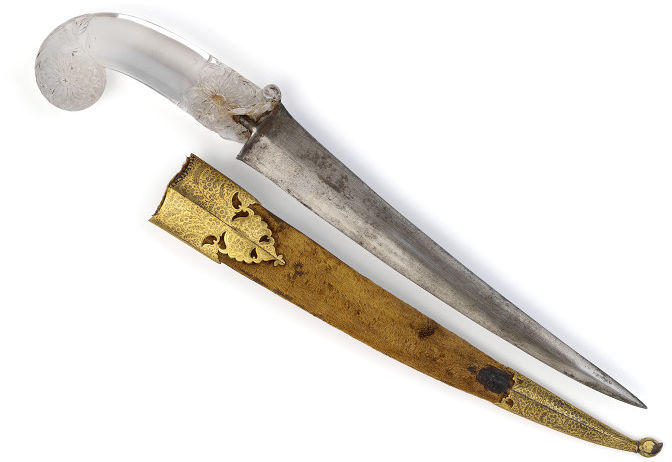