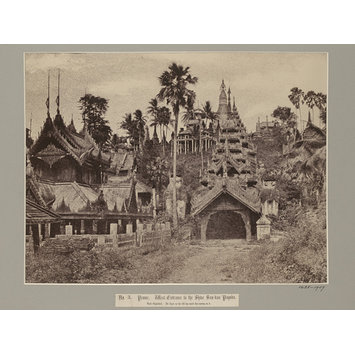 Shwesandaw, said to enshrine hair relics of the Buddha, is one of the holiest pilgrimage sites in Prome (Pyay), dating to 1100-1200 AD. Unlike Indian or Sri Lankan stupas, the Burmese zedi were constructed so that worshipers could enter the sacred space. This image shows the wide spire of the stupa or zedi just visible in the background, behind the tiered structure of the west entrance.

Linneaus Tripe created one of earliest photographic records of Burma (Myanmar). His reputation as a photographer developed in India where he was employed in the East India Company army. Appointed to accompany the first British diplomatic mission to Burma in 1855, he was instructed to record information about the country. Tripe took over 100 images, demonstrating his skill in observation and composition. He used calotypes or paper negatives, which gave the prints a ‘soft-focus’ look. [75 words]

This image shows the entrance to the pagoda (zedi/stupa). Just visible behind the tiered roof structure of of the entrance is the wide spire of the pagoda. Unlike Indian or Sri Lankan stupas, the Burmese zedi were constructed so that worshipers could enter the sacred space.

The entrance is surrouned by other built stuctures and trees and foliage.

This photograph was one of a series from Burma Views which was presented to the V&A in July 1909 by Lady Ida Low, wife of Malcolm Low, Esq., of the Bengal Civil Service and daughter-in-law of General Sri John Low. As a member of the Council of India in 1857, Sir John Low received the Burma Views (1857) set on 15th April 1857.
See Registry files for papers on acceptance of gift.
See Dewan p.222 for listings of other copies of the same photograph elsewhere.

Shwesandaw, said to enshrine hair relics of the Buddha, is one of the holiest pilgrimage sites in Prome. Unlike Indian or Sri Lankan stupas, the Burmese zedi were constructed so that worshipers could enter the sacred space. This image shows the wide spire of the stupa or zedi just visible in the background, behind the tiered structure of the entrance. 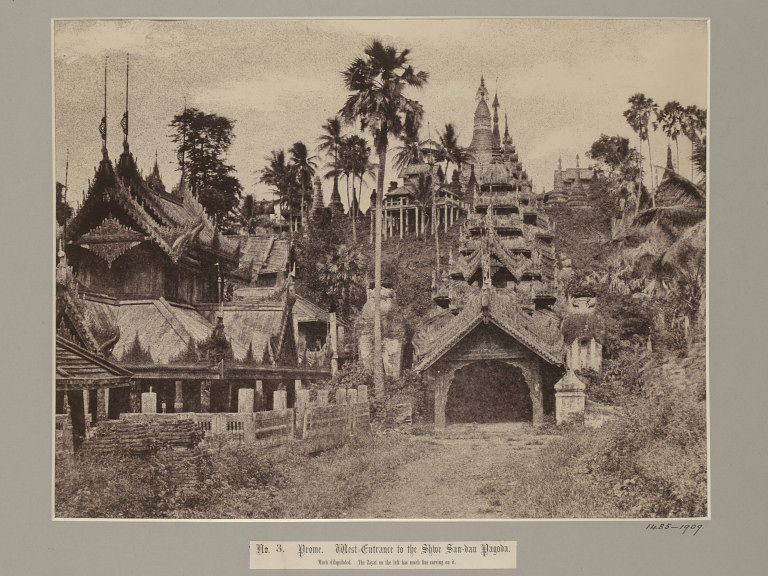