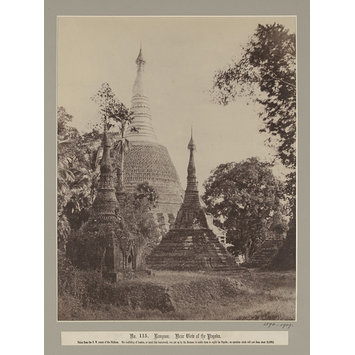 Near View of the Shwe-Dagon pagoda, Rangoon (Yangon)

Shwe-Dagon is the most important pagoda and pilgrimage site in Myanmar. The structure dates from about 600 AD. In this near view, the main zedi (pagoda) is covered in a scaffolding of bamboo. The structure was put up to enable the regilding of the zedi with gold leaf, an operation that routinely happens to this day. The trees in the foreground are today replaced with a wide forecourt dotted with smaller zedi and shrines.

Linneaus Tripe created one of earliest photographic records of Burma (Myanmar). His reputation as a photographer developed in India where he was employed in the East India Company army. Appointed to accompany the first British diplomatic mission to Burma in 1855, he was instructed to record information about the country. Tripe took over 100 images, demonstrating his skill in observation and composition. He used calotypes or paper negatives, which gave the prints a ‘soft-focus’ look.

This image shows one large zedi (pagoda) with several smaller ones nearby. The main zedi is covered in a scaffolding of bamboo. There are trees surrounding the structures.

This photograph was one of a series from 'Burma Views' which was presented to the V&A in July 1909 by Lady Ida Low, wife of Malcolm Low, Esq., of the Bengal Civil Service and daughter-in-law of General Sri John Low. As a member of the Council of India in 1857, Sir John Low received the Burma Views (1857) set on 15th April 1857.
See Registry files for papers on acceptance of gift.
See Dewan p.255 for listings of other copies of the same photograph elsewhere.

Tripe’s Burma Views were distributed widely and were very well received. Tripe sent 50 copies to Calcutta. Fourteen sets from these were distributed by the Government of India, including seven sets to members of the Mission to Ava, former capital of Burma. Twenty sets were ordered by the East India Company’s Court of Directors, and most were given to members of the Court. It is not known what happened to the remaining sixteen sets. Due to Tripe’s ownership of the negatives, he printed a selection of his photographs for further distribution. A set of 92 views of Burma was given to the King of Prussia, and more sets were given to the Madras Photographic Society and associated figures. Two hundred and ninety additional prints were offered for sale at 2 Rupees per print at Griffiths and Co., Madras

Shwe-Dagon is the most important pagoda and pilgrimage site in Myanmar. Here, the main zedi is covered in a scaffolding of bamboo. The structure was put up to enable the regilding of the zedi with gold leaf, an operation that routinely happens to this day. The trees in the foreground are today replaced with a wide forecourt dotted with smaller zedi and shrines. [63 words] 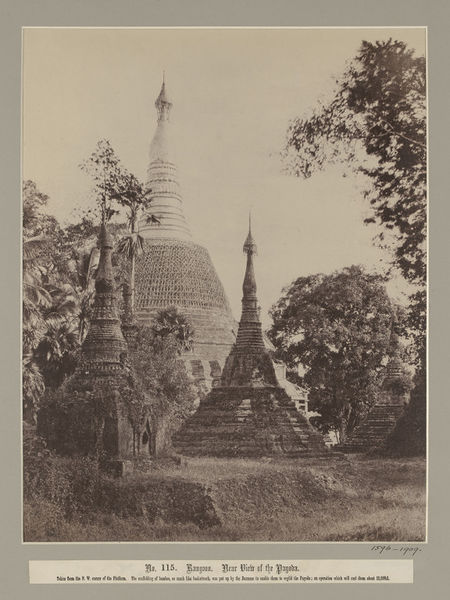