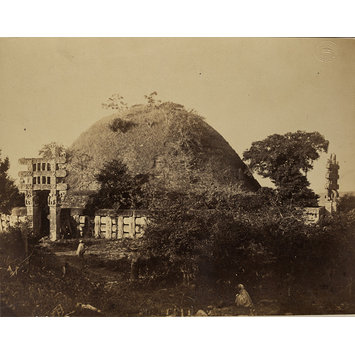 The Great Stupa at Sanchi

The stupa is the most distinctive form of Buddhist architecture. Used to enshrine the remains of the Buddha or his most revered followers, it is a symbol of the Buddha. The most complete example is at Sanchi, a hilltop complex of stupas, temples, and monastic buildings which was a thriving religious centre from 300 BC to around AD 1300.

This photograph shows the great stupa at Sanchi with the eastern gateway on the left hand side. The monument is overgrown with foliage. There are two figures, one crouching in the bottom right hand corner and one in front of the stupa just below the gateway.

Historical significance: The hilltop site of Sanchi comprises the remains of stupas, temples and monastic buildings. Abandoned from the 14th century, Sanchi was 'rediscovered' by a British officer, General Taylor, in 1818. However, it was not until 1881 that restoration work was initiated. Between 1912 and 1919 the structures were restored to their present condition under the supervision of Sir John Marshall, Director General of Archaeology in India.

The Great Stupa (known as Stupa 1) at Sanchi is the most important and complete surviving monument of the Shunga era (circa 185-175 BCE). The original mound was a brick structure built by King Asoka during the 3rd century BCE. During the late 1st century BCE it was enlarged to twice its original size, the dome was encased in sandstone slabs and a walkway was constructed on the ground level and marked with a stone railing (vedika).

A square structure (harmika) was constructed on top of the mound which contained a three tiered umbrella (chattravali), representing the three jewels of Buddhism - the Buddha, the dharma (ethical precepts of Buddhism) and the sangha (community of Buddhist monks).

Four stone gateways (toranas) were built around the stupa, one in each cardinal direction. Each gateway comprises two upright stone pillars with three architraves, elaborately carved in relief with scenes from the Buddha's life and stories from his previous existences (jatakas).

The stupa form developed out of hemispherical funerary mounds, the earliest being used to enshrine the remains of the Buddha himself. Over time, stupas came to commemorate the Buddha's spiritual achievement, his enlightenment and teachings. Smaller stupas were built as votive objects at Buddhist holy sites, often clustered around larger stupas.

James Waterhouse was an army officer who took up photography on his arrival in India in 1859. Like many others, he was appointed by the British colonial government to undertake photographic surveys of the people and architecture of India. His photographs of the monuments at Sanchi, with details taken from many viewpoints, show the systematic nature of these official surveys. Such images were collected for official purposes, documenting the diversity and wealth of the empire.

The stupa is the most distinctive form of Buddhist architecture. Used to enshrine the remains of the Buddha or his most revered followers, it is a symbol of the Buddha. The most complete example is at Sanchi, a hilltop complex of stupas, temples, and monastic buildings which was a thriving religious centre from 300 BC to around AD 1300. 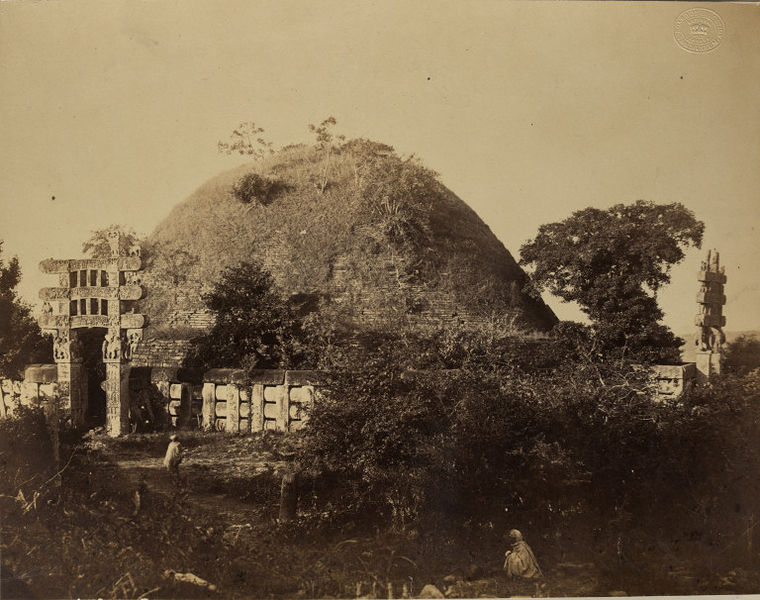