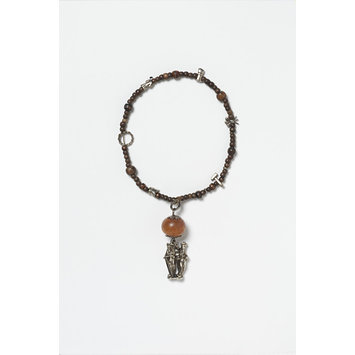 In the hope of gaining Salvation after death, Christians would repeatedly recite salutations and prayers, especially the Lord's prayer and the Hail Mary. Rosaries were and are used by Roman Catholics to assist in their devotions, the beads acting as a tactile reminder of the numbers of prayers to be said by the owner. In this example the small wooden beads are divided into groups of five by larger marker beads or by silver beads in the form of the instruments of Christ's Passion. It is thought that the smaller beads each represent an Ave Maria ( Hail Mary) prayer, and the larger ones a Pater Noster (Our Father).This rosary also has images of St Catherine and St Barbara, both models of steadfast faith.
By the fifteenth century, rosaries were important features of devotion in everyday life. In many fifteenth-century portraits, the sitter's piety is demonstrated by their possession and display of a rosary, their wealth by the materials from which the rosary was made.

The beads are of wood and arranged in sets of five, separated either by a larger bead or by an Instrument of the Passion, made of silver. These instruments are the hammer, the three nails, the buffeting hand, the seamless coat, the Crown of thorns, and the head of Christ wearing the Crown of thorns. From a corded ring at the end hangs a large amber bead, held by foliated silver settings above and below. To this is attached a second corded ring from which hangs a pendant of (left) St Catherine with a sword and (right) St Barbara with a chalice.

Historical significance: In this example the small wooden beads are divided into groups of five by larger marker beads or silver instruments of Christ's Passion. It is thought that the smaller beads each represent an Ave Maria prayer, and the larger one a Pater Noster. When passing their hand over the beads, the owner would be able to register which type of prayer they were required to recite. Rosary beads could be made from a variety of different materials, with one available to suit every level of society. The most basic kind were simply made from knotted cord, with the knots themselves serving as the tactile reminder of the prayer to be recalled and recited. Famously St Catherine of Siena possessed a simple knotted rosary, and they came to be viewed as symbols of humility. Other lowly examples were made from wood, or in Italy from coloured paste for which recipes have survived. More elaborate examples could be made from coral, bone, crystal, glass, amber or mother of pearl. This particular item combines wooden beads with silver and silver-gilt marker beads in the form of the instruments of Christ's Passion. The owner of this particular rosary would, therefore, have a visual reminder of the suffering of Christ. The addition of the figural representation of two saints as pendants suspended from the main body of the rosary was a common form which developed in the later Middle Ages. Their popularity is demonstrated by the fact that many saint pendants were serially produced by being cast in moulds.

A rosary is a string of beads intended to assist prayer and private meditation, a practice which Roman Catholics continue to this day. Rosaries were sometimes worn as a necklace or bracelet, more often worn hung from a girdle around the waist.

Rosaries were and are used by Roman Catholics to aid private devotion, each bead acting as a tactile reminder of the numbers of prayers to be said by its owner. The rosary, or paternoster, is thought by some to have evolved in the eleventh and twelfth centuries from a monastic context. The use of a rosary ensured that whilst the monks recited the psalms and lessons in Latin, lay brothers could participate by reciting in the vernacular the Lord's prayer - the Pater Noster - using the beads to count out the precise number of prayers to be recited. This practice developed further in the thirteenth century to include the prayer Ave Maria ( Hail Mary). The Dominicans were active promoters of the use of the rosary, founding confraternities and using preachers in the Rhineland, the Netherlands, and Northern France to spread knowledge of the rosary to the laity.

Instruments of the Passion 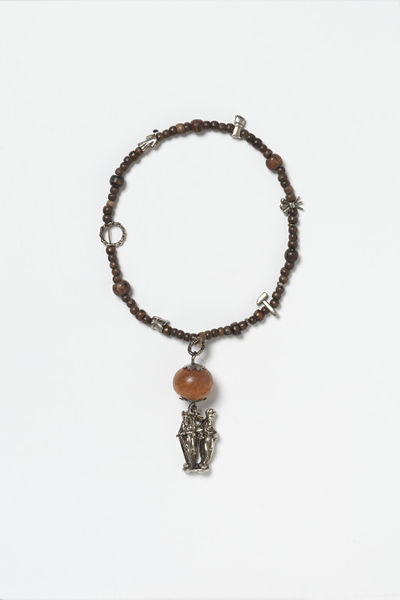