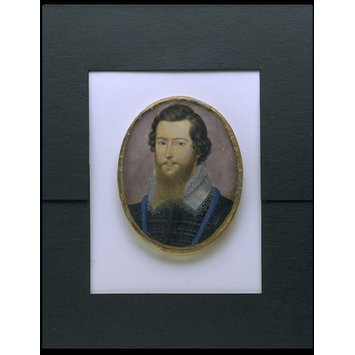 Watercolour on vellum, stuck onto plain card, depicting Robert Devereux, 2nd Earl of Essex (1566-1601), full face in a black doublet, white lawn collar and ruff, with a blue ribbon around his neck. The background is light grey with a gold border.

Watercolour on vellum, mounted on card

Exhibitions: Special Exhibition of Portrait Miniatures on loan at the South Kensington Museum, London, 1865. No. 1717.

The miniature is one of tem by various artists acquired as a group and displayed in two frames. Nine of these miniatures are in the V&A collection, E.1170-1178-1988. The tenth miniature by Nicholas Hilliard of Mary Herbert, Countess of Pembroke, is now held by the National Portrait Gallery, London.

Strong, Sir Roy, "The Leicester House Miniatures: Robert Sidney, 1st Earl of Leicester and his circle", Burlington Magazine CXXVII, October 1985, p.698, Cat. No. VI, fig. 48.
The following in an excerpt from a valuation report made by Christie's of the estate of the late Rt. Hon. Viscount Harcourt, K. C. M. G., O. B. E.

"The inscription on the reverse states that this is a miniature of Henry Earl of Northumberland, which is incorrect. The miniature is of Elizabeth's favourite, of which other versions exist (NPG, no. 4966, Burghley House, and in the Royal Collection). It is a lively characteristic of the sitter, and is an important miniature as it marks Essex's break with Hillaird whom he had patronised until then, and the acquisition by Oliver of a major patron.
Robert Devereux (1566-1601) eldest son of Walter Devereux, first Earl. Created Knight Banneret for his bravery at Zutphen, 1586, became a favourite of the Queen and Master of the Horse, 1587. In 1596 he defeated the Spanish in a naval battle off Cadiz, on this trip he grew a beard, and it is possible that this miniature was first painted immediately after his return from abroad. He married Frances, the widow of Sir Philip Sidney in 1590. In 1601 he was executed for trying to secure a plot against Elizabeth's counsellors." 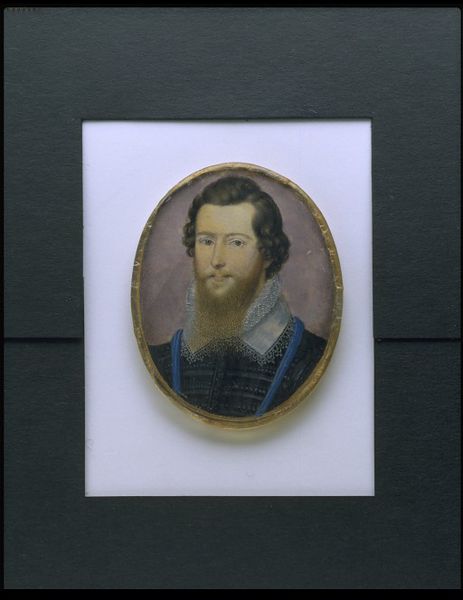