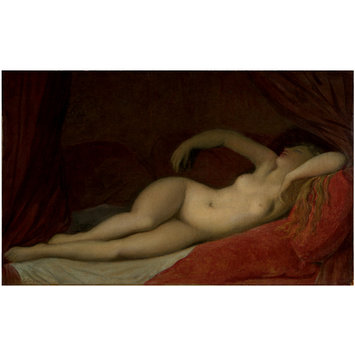 Jean Auguste Dominique Ingres (1780-1867) was born in Montauban. He studied with local painters in Toulouse before entering the Paris studio of David (1748-1825) in 1797. He was soon consider as the champion of the French classical tradition of history painting, traditionally opposed to the art of Delacroix in the early 19th century. Ingres was awarded the prix de Rome in 1801 and alternated long sojourns in Italy and Paris from 1806 but spent the last 9 years of his life in Paris where he died aged 87. His oeuvre also includes portraits paintings which represent a good testimonial of the 19th-century French high society.

This painting was probably a preparatory study for one of Ingres' Odalisques, a prototype of female reclining nude which recurs in several compositions. The precise painting for which it was a study is still subject to debate as well as the dating. However it was probably made in Rome between 1810 and 1830.

Nude female figure, full length, reclining on a red sofa, her head vanishing in the shadow.

At the back printed label with name and address of the Baron Jules de Hauff, of Brussels

Coll. Baron Jules de Hauff, Brussels; from whom purchased on 13 May 1881 as Ingres 'Femme couché' by Goupil & Co., Paris (stock book no. 15388); from whom bought by Constantine Alexander Ionides, probably on 21 November 1881; listed in his inventory (private collection) in November 1881 as 'Odalisque Dormant' by Ingres with a valuation of £1000; bequeathed by Constantine Alexander Ionides in 1900.

Historical significance: According to Ingres' biographer Henri Delaborde, this work belonged to the Baron of Hauff, in Brussels, and was painted in Rome as a study for the Sleeper of Naples, a painting commissioned by Caroline Murat, Queen of Naples, and probably destroyed around 1815. Ingres added some accessories (such as the red sofa and draperies) around the female nude in order to convert the study into a finished painting. The composition was then engraved by M. Alès and published in L'Artiste (1846) under the title: L'Odalisque.

The nature of this work is still subject to debate. It is alternatively identified as a preparatory study or a replica of the Sleeper of Naples (see Louvre, 2006 and Shelton, 2008), which formed a pendant to the Grande Odalisque executed in 1814 (Louvre, Paris - RF1158). Ingres executed a series of several female nudes in the same posture, except from the position of the right arm and leg (see one in the Musée Ingres (867.2030), and another formerly in Lady Aberconway Collection).

The representation of a reclining female nude recurs in several compositions in Ingres' oeuvre which includes the later Odalisque with a Slave, Fogg Art Museum Cambridge, Massachusetts, and Jupiter and Antiope, Musée d'Orsay, to which the present work may also be related. A pencil study (11.3 x 17.8 cm) after the former work by Alphonse Legros (1837-1911) also belonged to C.A. Ionides, and formed part of his bequest to the V&A (CAI.1134).

The sinuous lines and elongated limbs of the figure are characteristics of Ingres, who tried to emulate the art of Raphael and Michelangelo in Rome. The posture of Ingres' Odalisque would have a great influence on other artists such as Alexandre Cabanel (1823-1889), whose Birth of Venus (Musée d'Orsay, Paris) clearly derives from Ingres' prototype. 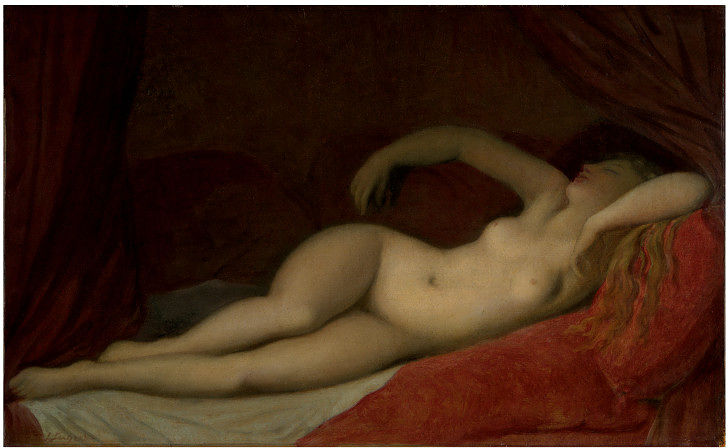