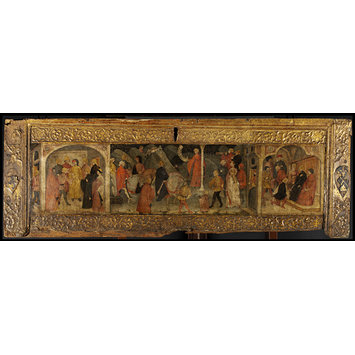 Italian marriage chests or cassoni were emblazoned with the coats of arms of the families about to be linked with each other, and decorated with stories connected to love, romance and marriage. This panel is from a cassone which is thought to have been made in Florence and would have formed part of a pair, one of which is now lost. It probably illustrates the events associated with marriage, rather than any particular story. The participants are shown in the contemporary costume of about 1430. The left panel depicts the exchange of rings, the central one the journey to groom’s house, and the right-hand one the wedding feast. The female figure in the centre stands by a column, the symbol of fortitude, with the scrolled inscription ‘don te io il cor meo’ (I give you my heart). The two families remain unidentified.

Cassone panel with low relief frame of gilded gesso, containing with three painted scenes depicting a marriage ceremony: the exchange of rings on the left; the journey to the groom's house with an allegorical figure of constancy holding a column and a scroll inscribed 'Non Muova (?) Il Cor Meo (My Heart Remains Constant) in the centre; and the wedding banquet at the groom's house on the right. The outer walls of the two houses at either end of the panel serve to mark each episode of the story. On both stiles the moulded and gilded ornament incorporates a shield shape with a painted coat of arms (partly lost): on the left a rampant lion, on the right a Florentine fleur-de-lis above crossed bill-hooks above the 'monte di sei monti' device, which has been identified as the Cerpelloni family of Florence (Lorenzo Sbaraglio, personal communication 3/2008).

Originally this panel formed part of a cassone. Dove tails cut into the front of the panel at both ends are partly concealed by side pilasters, which contain the (unidentified) arms of both panels. The 'feet' have been sawn off. The borders along the top and bottom of the panel are decorated with a gilt gesso scroll pattern alternating with gothic octofoils. A keyhole was cut into a central octofoil, probably at a later date. The cornice moulding at the top was nailed to the main panel, whereas the moulding at the bottom has been removed.

The panel has been reduced in depth towards the bottom, creating a wedge-shaped profile, thicker at the top. Two vertical wooden wedge-shaped backets have been fixed (probably glued) to the back of the panel, which in turn are fixed to a modern plywood backboard so that the panel 'floats' forward of the backboard, and equidistant from it.

'Non mouva [illeg:] il cor meo'
'My heart does not move
This is on a scroll held by a female allegorical figure, depicting Constancy

This cassone was bought by the South Kensington Museum for £18 from an unknown source and no other records survive as to its provenance. Judging from its style and costumes, it would seem that the cassone was made in Florence in about 1430, and would have formed part of a pair, one of which is now lost. At some later (unknown) date, possibly between about 1825 and 1850, the front was sawn free from the rest of the cassone and used as a wall picture.

Historical significance: This cassone panel records episodes of a marriage ceremony of about 1430, judging from the costumes of the participants. Furthermore it has come down to posterity in the form of long rectangular picture rather than the front of a marriage chest, as would have been its original function. Cassoni would have seemed increasingly cumbersome pieces of storage furniture as chests began to acquire drawers, but the fashion for all things connected with the early Italian Renaissance induced dealers and owners to salvage the front panels and sell them off as pictures to hang on walls.

Italian Marriage chests or cassoni were emblazoned with coats of arms of the families about to be linked with each other, and decorated with stories connected with love, romance and marriage. This example most likely illustrates the process of marriage, rather than any particular story, in contemporary costume of about 1430. Rather than use Medieval Romances or Classical Myths, the artist depicts contemporary practices such as the exchange of rings and musicians hailing the arrival of the bride, reinforced with allegorical figures and symbols of the bridal virtues, Constancy and Fortitude.

C.M.Kauffmann, Victoria and Albert Museum - Catalogue of Foreign Paintings, Vol. I. Before 1800 (London, H.M.S.O., 1973) pp. 104 - 106.
Cassone panel with scenes of a marriage ceremony: in the centre, an allegorical figure of Constantcy holding a column and a scroll inscribed non muova (?) il cor meo (my heart remains constant).
Gilt gesso and tempera on panel. 18 x 53 (45.7 x 134.6).
Acquired as ‘Florentine c. 1370’ Pollen, 1874), the description was changed to ‘Florentine c. 1400’ by Schubring (1915). More recently, John Pope-Hennessy (oral opinion) has suggested an alternative attribution to the workshop of the Master of the Griggs Cruciﬁxion, a Florentine artist of the ﬁrst half of the 15th century whose work is similar in style to that of Rossello di Iacopo Franchi (R. Offner in Burl. Mag., hm, 1933, p. 170 ff., L. Bellosi in Paragone (Arte), xvii, 1966, pp. 44-58). A comparison may be made, for example, with a cassone panel attributed to the Master of the Griggs Cruciﬁxion in the University of Wisconsin Collection (F. R. Shapley, Paintings from the Samuel H. Kres: Colleclion, Italian Schools, xm—xt1 century, 1966, p. 99, ﬁg. 270), but it does not seem sufﬁciently close to warrant a ﬁrm attribution to the same workshop. Paul Watson (oral opinion) has pointed out a relationship with a desco in the Fogg Art Museum, Harvard University (Schubring, 1915, no. 79, pl. xii). The proﬁles, hair styles and costumes of the women, the treatment of the draperies and the architectural features are closely paralleled in this derco and it seems probable that these two works originated in the same work- shop. The style and costumes of 5791-1860 indicate a date c. I430. Schubring described the subject matter as (left) a game of rnorta, (centre) a hunting scene and (right) a young man kneeling before a seated lady to whom he is handing a beaker. However, the game of niorra was played seated and, when it is depicted, appears much more clearly as a game (P F Perdrizet in Journal of Hellenic Studier, xvm, I898, p. 129). This is far more likely to be a marriage ceremony with the same principal ﬁgures repeated i.n each compartment. The two scenes on the left are similar to illustrations of the story of Griselda (Boccaccio, Decameron, x, 10) in which the patient Griselda is made to suffer all manner of trials after her wedding to the Marquis. This was occasionally ﬁgured on cassoni and a fairly close comparison may be drawn with the left half of a panel in the Pinacoteca at Modena (Schubring, 1915, no. 186, pl. xxxix), but the right-hand compartment of 5791-1860 is not paralleled in any of the extant Griselda cycles. It is perhaps more likely that it represents scenes of a wedding ceremony without literary allusions, rather like the Aditnari cassone in the Accademia at Florence (Schubring, 1915, nos. 256-60, pl. lvi). However, this leaves the precise nature of the right-hand scene unexplained and the possibility that the panel illustrates a literary theme other than Griselda cannot be entirely excluded. Constancy is usually shown with a column and a sword. The column — the principal attribute of Fortitude ~ indicates the immovable ﬁrmness of her character in face of pain and sadness (Ripa, Iconologia, 1645, p. 124 f.).

Coffer, panel or front. Painted with figure subjects in three compartments, surrounded by a border of scroll ornament in raised and gilt stucco work. Italian (Florentine). About 1370. 4 ft. 5 in. by 1 ft. 6 in. Bought, 80l.

The painting of this coffer represents more direct dramatic action than we commonly see in these pictures. The history of a disputed treaty of marriage and the successful issue to the faithful lovers is here recorded. In the right hand corner is a group of persons, disputing with great vivacity. A fair haired young man in a long furcoat or cassock, now black, but perhaps dark blue or green originally, is in high discussion with a rival and an aged umpire, the father of the bride or opponent is listening to what is said. The action of the hand is most dramatic, as well as the expression on the faces of the persons engaged in discussion. A doorway seems to lead to the central portion, which is only so far divided from the sides, for the doorways are but breaks in a continuous background. Here the same young man is riding to the house or bower of the bride, with squire and attendants at his horse’s head. The young lady is holding to a pillar top indicate her constancy, and from her issues on a scroll legend, NON MUOVA COR MEO. So that family arguments are not to be understood to have moved her constancy. At the door of an inclosure a lady, full dressed, receives him, and he is seen partly through the open door, kneeling before her, and again in the extreme left seated by her on a bench or seat of estate. The same head and features and the same dress preserve the identity of the lover through these various actions, combined on the whole into one composition. The painting is more simply dramatic and aims at telling a natural tale more completely than is usual in furniture painting, or in the usual historical representations of the day, and there is a certain charm in a piece of old domestic life which tells perhaps something of an actual story; anyhow a chapter of a story as old as humanity. The surrounding work, which is in relief, frames it in as a complete cabinet picture.

FRONT OF MARRIAGE-CHEST.
Wood with decoration in gilt gesso
relief and painted in colours.
With scenes relating to a treaty of marriage
and an inscription NON W/OVA IL COR NE0
(My heart changeth not), as spoken by the bride.
Arms as borne before 1494 by Scerpellioni di
Firenze; dexter shield unidentified.
FLORENTINE; early 15th century.
5791-1860.
[1930]
5791-1860
Cassone Panel
Gilt gesso and tempera on wood
Florentine; about 1430
The panel depicts The Allegory of Marriage, represented by the marriage of the couple on the left, the bride's journey to her new home in the centre and the wedding banquet inside the pavilion on the right. The central allegorical figure stands by a column, representing Fortitude, and holds a scroll that reads 'Dono…io il cor mio' (I give…my heart). [2004]