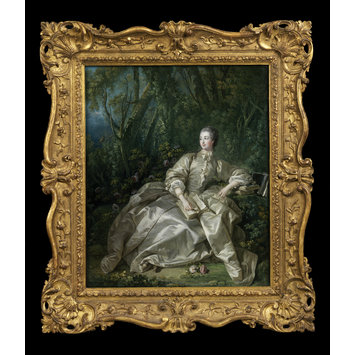 François Boucher (1703-1770) was born in Paris and probably received his first artistic training from his father who was a painter before attending the Académie de France in Rome. He may also have travelled to Naples, Venice and Bologna. Around 1731 Boucher returned to Paris where he rapidly gained the royal favour and interest from the private collectors. He was a very prolific artist and produced a wide range of artworks from pastoral paintings, porcelain and tapestry designs as well as stage designs influencing deeply the new Rococo movement.

This painting is a fine example of the dominant Rococo style in 17th-century France. It depicts the Marquise de Pompadour who became in 1745 the favourite mistress of King Louis XV. She is portrayed in a garden or edges of woods wearing a sumptuous white silk dress which blends in with the ochre green of the vegetation around. This picture is characterised by the combination of a subtle artificiality and sufficient naturalism, which is a typical feature of the Rococo aesthetic. This painting is a good example of how the Marquise was probably made to celebrate and consolidate the Marquise’s new status as well as exalting her renown beauty.

The Marquise of Pompadour portrayed full-length in a garden. She wears a sumptuous silk dress and holds a book while facing left. All around the picture is filled with vegetation, wild roses and bird.

'f. Boucher 1758'
Signed and dated by the artist on a stone, lower right

Historical significance: This painting is a fine example of the Rococo style Boucher contributed to develop in 18th-century France.
Among numerous commissions, Boucher also worked for the Marquise de Pompadour who became, between 1747 and her death in 1764, his most enthusiastic admirer and patron. Among the best known pastoral and the few religious scenes the Marquise commissioned from Boucher, there are also a number of portraits of herself.
The present painting portrays the Marquise de Pompadour in a garden that looks like the edges of a wood, a typical feature of artificially recreated nature favoured by the Rococo. She wears a sumptuous silk dress in yellowish white which blends with the scenery depicted in harmonious shades of ochre green. This aesthetic dominated by subdued colours is characteristic of Boucher's art which recreated the genre of the pastoral, fostering an imagery of shepherds and shepherdesses as sentimental lovers that was taken up in every medium, from porcelain to toile de Jouy. He transferred this pastoral atmosphere to other subject matters such as court portraits. The wild roses and the little birds enhance the idyllic atmosphere of the picture while the books allude to the Marquise's reputation as a patroness of the arts.
Another portrait of the Marquise in a garden is dated 1759, a year after the V&A version (Wallace collection, London -P418) whereas two earlier portraits depict the Marquise in an interior: one dated 1756 is in the Alte Pinacothek, Munich (Inv.-Nr. HUW 18) and the other is in the National Galleries of Scotland, Edinburgh (NG 429). In these two interior scenes, the Marquise is pictured is the exact same position whilst holding an open book but the palette Boucher employed appears there much more brilliant with saturated colours, another aspect of Boucher's art who oscillates between pastel-like scenes and more vivid although utterly harmonious colour scheme. H. Wine (2002) had suggested that this more chastered representation of the Pompadour displaying an immaculate white dress, was in part a response to unsympathetic criticism that greeted the Munich portrait at the 1757 Salon.
In 1758, Boucher painted another portrait of the Marquise which looks quite different in the format and much more intimate. It depicts the Marquise at her toilet (Fogg Art Museum, Harvard, Cambridge) in the middle of a beautifying ritual and oscillates between a courtly and politic interpretation (consolidating her position as a favourite) and a purely private image painted for her brother, the marquis de Marigny. Anyhow Boucher paid here another tribute to her beauty. However Boucher was not the only artist to have portrayed the Marquise but others such as François-Hubert Drouais (1727-1775) portrayed the Marquise in the early 1760s (see The National Gallery, London; Stewart Museum, Montreal, Musée Condé, Chantilly).
This approach, characterised by a wealth of picturesque details, dominated French painting until the emergence of Neo-classicism, when criticism was heaped on Boucher and his followers.

Madame de Pompadour became the official mistress of King Louis XV in 1745. She was also an influential patron of the arts and a leader of taste. A devoted supporter of the Sèvres porcelain factory and a keen collector of Japanese lacquer, she furnished her residences with fine furniture and porcelain. The artist Boucher shows her here with a book on her lap to suggest that she had intellectual interests. 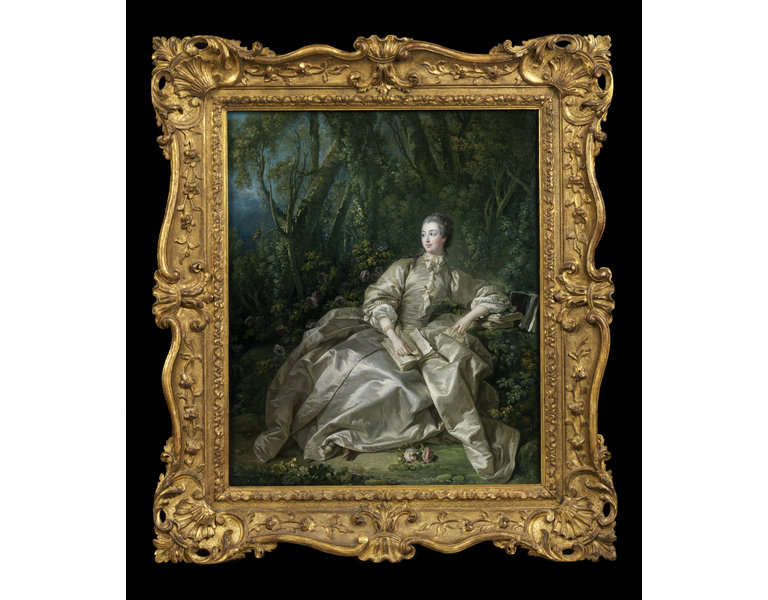