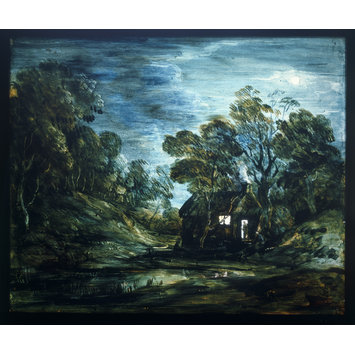 The following description of this painting appeared in 1824.'The Cottage - Representing a most powerful effect of fire-light in the interior. The artist has given considerable interest to this subject by introducing the cottager opening the door: the contrast between the light of the cottage and that of the moon, excite the most pleasing association in the mind'.

This is catalogue no. 134 in John Hayes "The Landscape Paintings of Thomas Gainsborough: A Critical Text and Catalogue Raisonne" (1982).

Notes taken from Hayes, cat. no. 134:
"This is the first occasion on which Gainsborough painted a moonlight scene and the first in which he tried out an indoor lighting effect; the window, and the dooway against which the figure is silhouetted, are brilliantly illumined by firelight... Edward Edwards described the effects produced by Gainsborough's transparencies as "truly captivating, especially in the moon-light pieces, which exhibit the most perfect resemblance of nature."

Oil painting on glass, 'Wooded Moonlight Landscape with Pool and Figure at the Door of a Cottage', Thomas Gainsborough, ca. 1781-1782

"Label" created by Elise load : Author unknown:
"This is one of a series of transparencies produced by Gainsborough. They were viewed in a peepshow 'show box', illuminated from behind by four small candles and seen through a lens. The light was diffused and varied by a coloured silkscreen inserted between the candles and the glass so that remarkable flickering effects were produced. The subject, a moonlit nocturn with its dramatically lighted cottage windows was a characteristic picturesque subject." [] 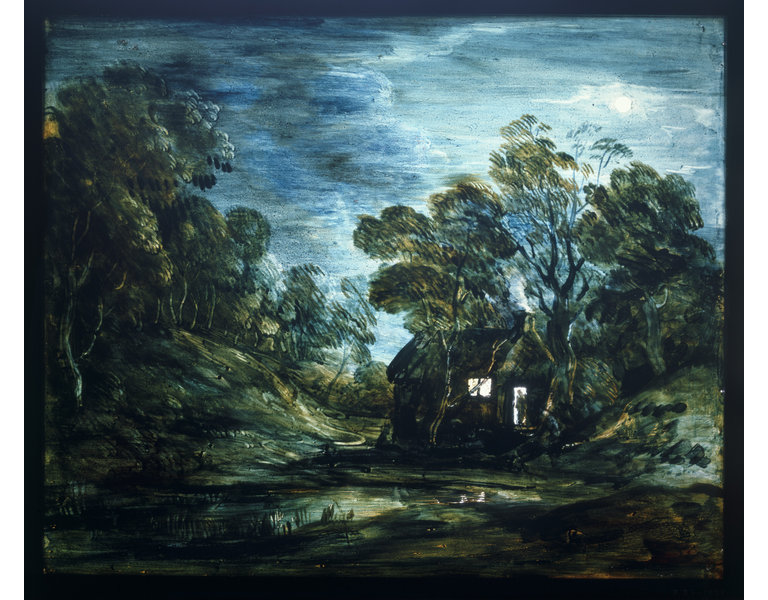