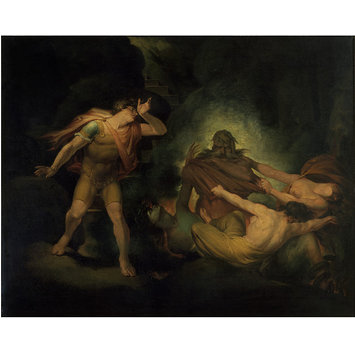 Henry Fuseli [Johann Heinrich Füssli] (1741-1825), was born in Zurich and received rigorous art-historical training from his father Johann Caspar Füssli. He spent most of his life in London becoming an associate of the Royal Academy in 1788 and a Royal Academician in 1790. He specialised in history paintings on a grand scale, drawing his inspiration from the mythology, classical literature and notably Dante’s Divine Comedy. He was also a prolific writer and was elected the Academy’s Professor of Painting in a post he held until 1805; he was made Keeper in 1804 and re-elected Professor in 1810, and the statutes were changed to enable him to retain the Keepership as well.

The subject matter was borrowed from Walter Scott’s ballad, The Fire King, published in G.M. Lewis’ Tales of Wonder in 1801. It is set at the time of the Crusades, and depicts the Fire King about to give a magical sword to the hero, Count Albert. This scene of emotional intensity and the emphasis on the hero’s terror as the Fire King appears in a glow of volcanic irruptions is a fine example of Fuseli’s art. His wide-ranging imagination and favourite subject matters draw upon the supernatural, fairy mythology and demonic superstition.

At the bottom of stairs in a cavern, a young man wearing a classical armour hides his face with terror in front of an old man dressed all’antica emerging from volcanic irruptions on the right, four half-naked female figures surround him and try to tear up his toga.

Historical significance: Fuseli's subject is taken from Sir Walter Scott's Poem, The Fire King published in London in 1801. A Crusader, Count Albert, has been captured by his Infidel enemies and has fallen in love with the Sultan's daughter, Zulema. To gain her hand he has to abjure Christianity, fight his former allies and pass three nights deep in a cavern. Here the scene depicts him in front of the King of Fire who will deliver a magic sword to the hero. The four female figures surrounding the King came from Fuseli's imagination and are not mentioned in the poem. 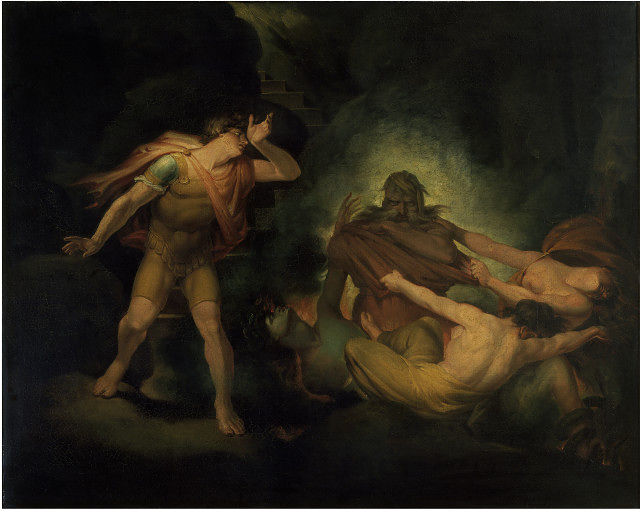