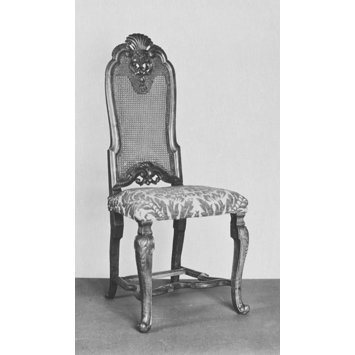 Chair of carved walnut with tall caned back and modern upholstered seat. The cabriole front legs, with scrolled feet, carved decoration of foliage and drops on the knees and moulded edges, are tenoned up into the seat rails. At the top of the front legs there is small waisted block. The back and side seat rails tenoned into the back stiles. The back legs also have scrolled feet, although not the same raised moulding on the outer edge. All the legs show a uncertain cut with wavering lines on the inner, un-carved surfaces. The front and back legs are joined to each other by curved stretchers, these stretchers in turn joined to each other by two cross-bars - a straight one near the back, a break-fronted one near the front. On the top surfaces all the stretchers are moulded at each side. The side and front seat rails and corner blocks look new (possibly replaced mid-nineteenth century or later) the back rail looks original to the chair. The seat is covered with stamped woolen velvet, originally blue/green, now faded to mustard with a symmetrical pattern of scrolls, foliage and small flower heads. It has deep cotton and silk fringing in dull gold, applied to front and sides then wrapped round the back edge of the back legs. The heading is deeply arcaded and the uniform fringe is knotted. Underneath the seat we can see two different types of webbing/base cloth, both plain weave, they both look old and were perhaps refixed when the rails were replaced (the upper one possibly newer?). The upper webbing is loose, plain weave, probably hemp, with doubled threads and provides a whole base cloth. Below this, running across the chair, towards the front, is a broad (21.5cm) webbing. This is also of plain weave with doubled warps and single thicker wefts, all probably in hemp. Down the centre runs a stripe with three red warps flanked by two (probably green or blue) warps. Midway between this and the edge on each side is a second blue/green stripe of two warps, the edges each show red stripes of three warps. From the underside, a blue/green selvedge edge of the stamped velvet is visible on both sides, indicated that the velvet is woven in narrow width (approx 53cm).
The top rail of the seat back is tenoned down into the tops of the stiles, the bottom rail tenoned into the side of the stiles, which are waisted (in-curved in the upper part). The frame of the back is moulded on the front face, with the same mouldings as the top of the stretcher and all its back edges are chamfered. The chair back is caned with the caning extending over part of the top rail which is ornately carved with pierced scrolling and foliate motifs and topped by a shell, the bottom rail also carved with smaller pierced scrolling and foliate ornament.
The orthogonal of the caning are narrower than the diagonals, which may be an indication that this is early work. It is thickly coated with the same dark varnish that covers the whole frame. There is a small loss of caning on the PR.

Carved and joined walnut with caning and upholstery

IV
under centre of front stretcher, indicating that it was part of a set of at least 4.

+I
under PL end of front stretcher.

+I
under the centre of the back stretcher.

Bought for £35 from Mssrs Walpole Bros, Old Bond St., Bath. Listed as 'Good; a seat rail replaced. The woolen velvet covering to the seat was added in the 1960's'

Closely related to designs by Daniel Marot and fore-shadowing a chair form that was to become characteristic in Holland during the first third of the 18th century. 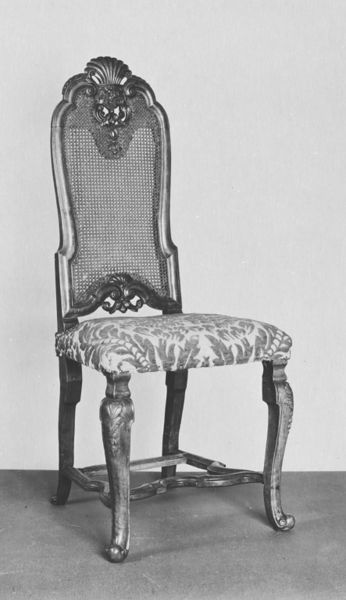