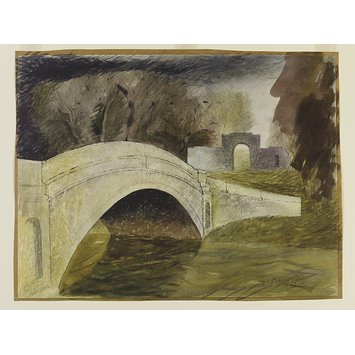 The Bridge at Tyringham, Buckinghamshire

In 1940 the Ministry of Labour, in association with the Pilgrim Trust, established a project to commission artists to provide a record of the changing face of Britain. This remarkably ambitious scheme was known as 'Recording Britain'. The secretary of the Central Institute of Art and Design recommended in 1939 that 'artists should be appointed to make drawings, paintings and prints at the war fronts, in factories, workshops, shipyards and on the land, and of the changed life of the towns and villages, thus making a permanent record of life during the war which would be a memorial to the national effort, and of particular local value'. The impetus behind the project was the threat of extensive bomb damage during the Second World War, particularly in the cities but also in the countryside.

Early work by John Piper (1903-1992) was abstract in style. By the late 1930s he had begun designing for the theatre. His watercolours for 'Recording Britain' of church interiors, landscape gardens and country house parks have, as in this painting, the dramatic quality of stage scenery. Tyringham in Buckinghamshire was designed by the architect Sir John Soane and built between 1793 and 1797.

Watercolour painting; signed and dated. House, bridge and screen at Tyringham were devised as a complete scheme by that master of architectural illusion, John Soane. In the artist's picture both bridge and screen appear as flat and insubstantial as stage scenery, though in reality each is massively solid. By this device he emphasises their role as creators of dramatic effect, props designed to enhance the central figure in the drama, the house itself, not seen in the picture.

Watercolour by John Piper, 'The Bridge, Tyringham', from the Recording Britain Collection (Buckinghamshire); 1940. Signed and dated. 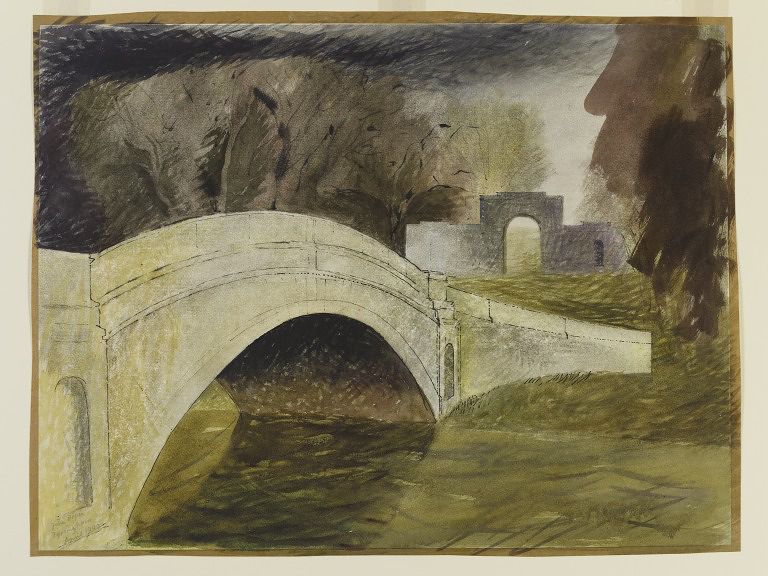