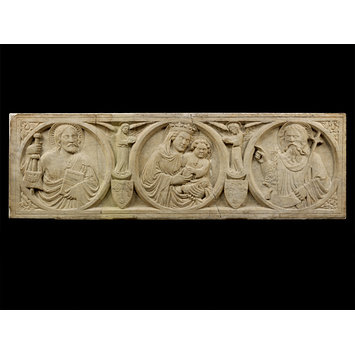 Virgin and Child between Saints James and John the Baptist

This relief is typical of many funerary monuments produced in and around Naples in the latter half of the 1300s. The presence of St. James and St. John the Baptist could indicate the name of the deceased, as people often placed their patron saints on tombs or artworks that they commissioned.

This section of a sarcophagus shows the Virgin and Child, St. James, and St. John the Baptist in three separate roundels. The Virgin and Child are in the centre with St. James to the left and John the Baptist to the right. The Virgin holds a pomegranate in her right hand and the child on her left arm. Two small angels bearing dishes are found on either side of the central roundel. Unidentified coats of arms are underneath the angels. Each corner is filled with a flower.

The relief was included in a London Sotheby's sale of 13 March 1931, and was identified as an altar front from the church of San Martino in Naples. It was attributed to Tino di Camaino. It is not clear if the relief was sold at that time, or to whom, as it appeared again in another London Sotheby's lot from 18 June 1946 with many of the same objects from the 1931 sale. The museum purchased it for £40 pounds. It was probably not an altar front but the top of a sarcophagus.
The left hand angel and left side of the shield underneath the angel were damaged and made up in plaster. The damage must have been sustained prior to 1931, as it can be seen in the photograph in the Sotheby’s sales catalogue of that year.
The attribution to Tino di Camaino given in the sales catalogues of 1931 and 1946 was removed by John Pope-Hennessy in his 1952 catalogue, and the relief was given the more general authorship of “Fourteenth Century Neapolitan.”

Historical significance: Further research is needed to determine the origin of the V&A relief. The relief clearly shares similarities with the Artus tomb. However, it is difficult to determine which came first. The shared motif of an angel standing over an upward curving band above a heraldic shield would suggest that the creator of one tomb knew of the other. The difference in the poses of the angels – in the V&A relief they are bearing plates filled with what may be fruits and in the Artus tomb their hands are in prayer position – could indicate the variation of a stock workshop design. However, the carving style appears to be quite different. Generally artists from the same workshop had a similar style. The figures on the V&A relief are stocky and seem to have smaller hands than the figures in the Artus tomb. However, the saints and the child Jesus share an intensity of expression due to the faint tracings of incised pupils. The presence of St. James and St. John the Baptist could indicate either the dedication of the church in which the owner was buried (as it is not clear why the church of San Martino was indicated as the provenance) or the patron or name saint of the deceased.

This relief is similar in format and style to those found on many sarcophagi produced in Naples in the fourteenth century. Pope-Hennessy noted the influence of Tino di Camaino’s Angevin tomb monuments on Neapolitan sculptors into the later fourteenth century. (Pope-Hennessy, 1952, 17). The Angevin tombs consisted of either freestanding sarcophagi raised on columns or wall-mounted sarcophagi, each surmounted by a baldachin or pinnacled roof structure as befitted royalty. The format – often on a reduced scale and without the baldachin-- became popular among the Neapolitan elite of the Fourteenth Century.

The tomb of Catherine of Hapsburg (the daughter-in-law of King Robert of Naples) is considered Tino’s first funerary monument. He created it in 1323-24 for the church of S. Lorenzo Maggiore as a double-sided free standing tomb. It was the first of its kind and has the three medallion format shared by many of the later tombs (Bock, 134). This format would remain popular in the city long after Tino's death.

It should be noted that the other Angevin tombs (by Tino and his followers) do not include the three medallion format, but include figures arranged in niches, or in the case of the tomb of Charles of Calabria, in a freer format with no architectural definition between figures. It is possible that once the three medallion format became popular among Naples’ elite the royalty felt a need for more elaborate tombs to distinguish themselves.

Pope-Hennessy suggested that the V&A relief came from the same workshop as a 1370 tomb of a member of the Artus family in the church of San Francesco of Sant’Agata dei Goti (a small town in Campania). The Artus tomb is a sarcophagus raised on paired twisted columns with the effigy of a sleeping knight on top. The relief is on the outward facing side of the sarcophagus with an inscription in the upper and lower borders. Pope-Hennessy suggested that the lack of inscription on the V&A relief indicated that it once served as the cover of a sarcophagus as in the mid-fourteenth century tomb of Letizia Caracciolo in San Domenico Maggiore, Naples.

The Artus tomb and the V&A relief both have two angels between the medallions who stand above heraldic shields. The Caracciolo tomb has instead large shields and flowers filling the intervening spaces.

A similar format is found in the detached fronts of the sarcophagi of the Boletto family in the church of Sant’Elegio Maggiore in Naples, dated to the fourteenth century. Two detached reliefs survive, and the inscriptions in the borders suggest that they formed the outer faces of the sarcophagi. One includes the Virgin and Child in the center with a bishop saint and crowned male saint in the flanking medallions. The other depicts Christ as Pantocrater (with his hand in a blessing gesture and holding a book) flanked by John the Baptist and a bearded male saint (possibly Peter). Both tomb fronts have two angels with folded arms over smaller roundels that hold shields. One tomb front includes the small figure of a donor below the left hand shield, with an angel filling the respective space on the right. The other relief does not include a donor and has an angel in its place.

The funerary monument of the Archbishop of Salerno, Orso Minutolo, (d.1333) in the cathedral of Naples is also similar to the V&A relief. The Minutolo relief includes a crowned Virgin holding the Christ child and handing him a pomegranate. St. Peter is on the left and a bearded male saint holding a book is on the right. All of the figures are in medallions, separated by two small roundels with flowers in the center. The space between and the corners have been filled in with flowers. The sarcophagus is elevated on paired columns.

The funerary monument of Bishop Tommaso Santomagno (d.1341) in the Cathedral of Salerno is also analogous, though in this case the flanking figures in the medallions have been replaced by large heraldic shields. Variations also occur in the funerary monument of the Bishop of Caserta Vecchia, Iacobus Martanus (d.1374), though in this case the space between the medallions has been filled with a single angel in a hexagon, on either side of the Man of Sorrows. 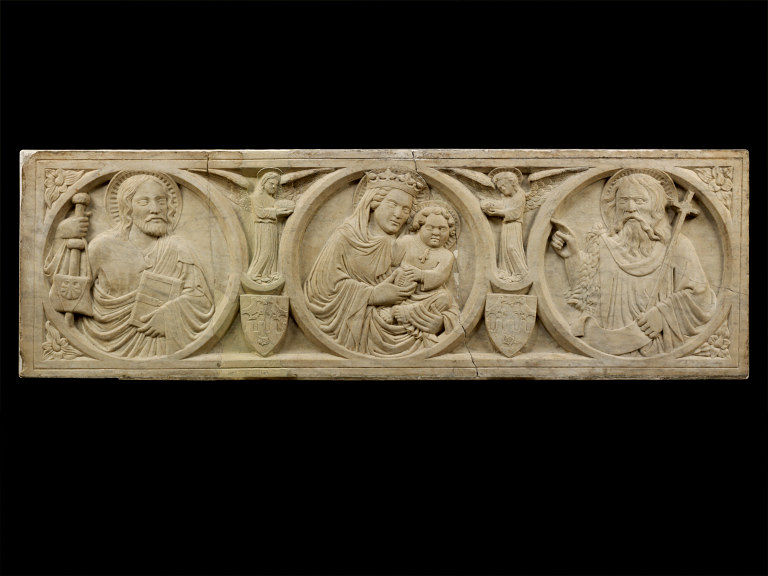