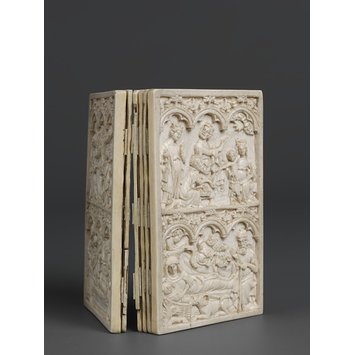 Scenes of the Life of Christ

This is a set of six ivory writing tablets and a rare example of a complete writing tablet booklet. On the outside they are carved on one leaf with the Nativity and the Adoration of the Magi and on the other with scenes of the Crucifixion and Entombment. Above each subject there are three trefoil arches. Sets of ivory tablets for writing are rare. Theses tablets were apparently originally bound together in book-form with a hinge of leather or vellum.
Ivory covers for writing tablets survive in good numbers from the fourteenth century. Wax writing tablets or panels of a hard material filled with layers of wax that could be inscribed with a stylus, were common in Antiquity and continued in use throughout the early Middle Ages. They were particularly useful for note taking, given their portability and the fact that their surfaces could be erased and reused.
The majority of such tablets would have been made of wood, although other materials such as gold, silver, bone and ivory were also used. In most cases the tablets formed part of a group of up to eight panels, only the covers of which were carved with imagery on their outer faces. The imagery on most surviving tablets and boxes derives primarily from diptychs, with a quality of carving lower than that commonly found on diptychs, at least partly as a result of the thinner ivory material on the tablets.

Writing tablets, ivory, consisting of four thin leaves with reserved rectangular depression on each side, and two carved ivory covers, bearing imagery on the outside and a rectangular depression on the back. They are prepared with green wax for the purpose of writing. On the outside are carved beneath gothic canopies, the adoration of the Magi, the Nativity, the Crucifixion and the Entombment. The front cover is carved in two registers with narrative scenes beneath an arcade of three wide trefoil arches, with crockets above and small trefoils engraved in the spandrels. The lower scene represents the Nativity, with Mary reclining in bed and reaching across to the swaddled Christ-Child, who lies in a wicker crib. To the right, Joseph with beard and cap sits holding a tau-staff in his left hand, and gestures with his right. In the centre background a shepherd is surprised by an angel, announcing the miracle events with a speech scroll. In the upper register, the three magi appear before the Virgin and Child. The Virgin, crowned, holds a rose in her left hand, while with her right she supports the standing Child on her knee as he twists to reach towards the eldest magus, who is kneeling before him. This figure, with large beard, supports his crown with his left hand, while holding out a pyx-like object with his right. Above him, the second magus points out the star to the magus behind. The back cover bears two similarly framed registers, but this one reads from the top downwards. The upper image shows the Crucifixion, with the horizontal arm of the cross extending to the full width of the panel. To either side appear four figures; to the left, the Virgin swoons in front of three supporting holy women; to the right are St John the Evangelist, two Jews and a centurion. The lower image depicts the entombment of Christ. At either end of the sepulchre, bearded male figures with caps lower Christ's body using his winding sheet. In the centre Nicodemus applies myrrh and aloes from a jar, while behind can be seen the figures of the three Maries and another male figure. 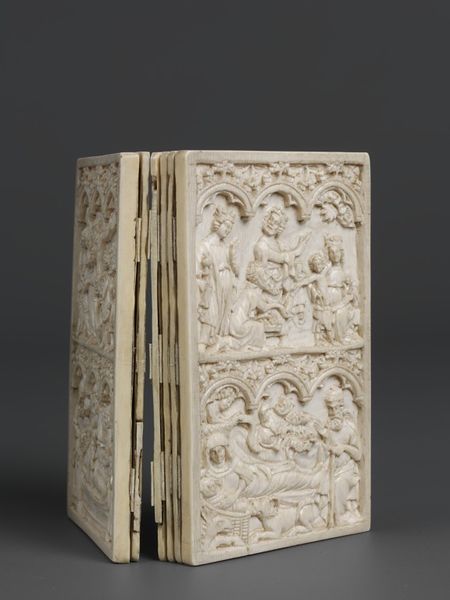