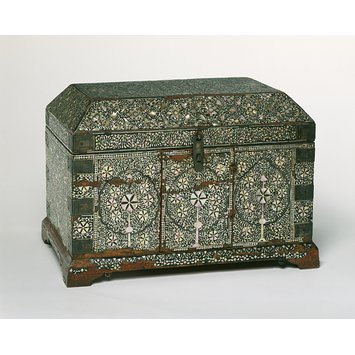 Although this casket is not dated or signed, it can confidently be said to have been made in the mother-of-pearl workshops of Gujarat in western India about 1600. At that time, Gujarati mother-of-pearl articles were being made for local consumption as well as for different export markets, including Ottoman Turkey, the Middle East and Europe. In those regions, articles in mother-of-pearl were avidly collected and prized, due to their luminescent and lustrous surfaces and the beauty of their design. The museum bought it in 1866 for £8 8s 5d.

Casket, teak, overlaid with mother-of-pearl set in black lac, with engraved brass mounts. This box has decoration of exceptional quality in mother of pearl. The Timurid-inspired scalloped medallion on the lid is especially finely executed.

In the sixteenth and seventeenth centuries, Gujarat, in western India, was the centre of production of a range of articles decorated with or fashioned out of mother-of-pearl. The principal appeal of mother-of-pearl, a substance found in thin layers on the inside of certain shells (most particularly Turbo marmoratus), lay in its lustrous and iridescent surface. Articles made from the material reflected light and glowed in pretty shades of pink and green. The material was also versatile; it was sufficiently strong and stable as to be applied in pieces over a wooden carcass as a veneer, or could be used alone in the construction of smaller articles such as bowls and cups.

Gujarat is first mentioned as the centre of mother-of-pearl work in 1502, in which year the King of Melinde, on the East Coast of Africa, presented Vasco da Gamawith 'a bedstead of Cambay, wrought with gold and mother of pearl, a very beautiful thing'. In the European context, Indian mother-of-pearl first makes its appearance in Portuguese royal collections. A list of Manuel I's (1469-1521) wardrobe made in 1522 included, among other things, 'a casket from India inlaid with mother-of-pearl with eighteen sheets of silver', while in 1529 Francis I of France (1494-1547) purchased a chair and bed made in India, which were 'marquete a feillage de nacle de perle... vernissee de noir et enrichie de feuillages et figures dor'.

Gujarati mother-of-pearl can be classified into two groups. The first, to which this casket belongs, consists of articles made of wood and covered with a dark mastic inset with pieces of mother-of-pearl in vegetal, geometric and, less frequently, figurative designs. The second group consists of objects which are either constructed entirely from pieces of mother-of-pearl; or constructed of wood, entirely overlaid with pieces of mother-of-pearl. A physical examination of the objects themselves suggests that the two groups were influenced by one another and possibly even made in the same place; similarities are evident not only in the forms that were manufactured, but also in design and methods of construction. That there exists a small group of objects that has both mastic-inset and overlaid mother-of-pearl decoration also suggests that craftsmen working in the two techniques collaborated or deliberately worked in each others style. 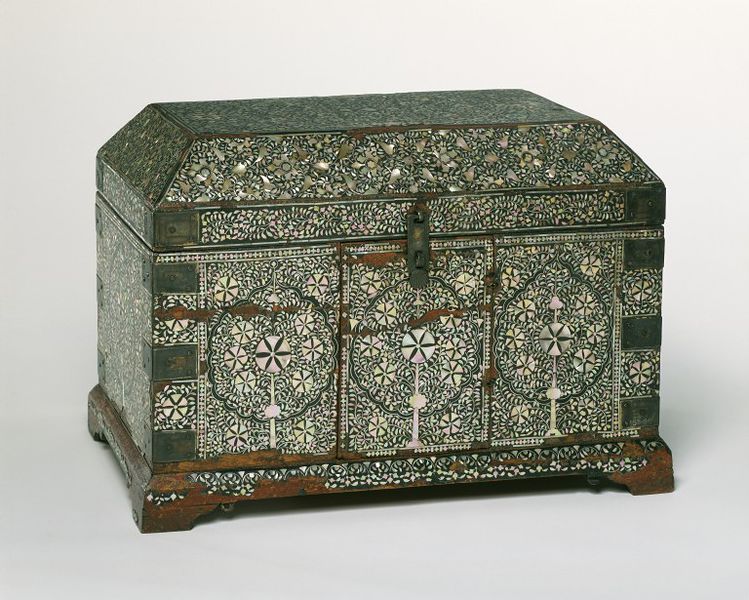