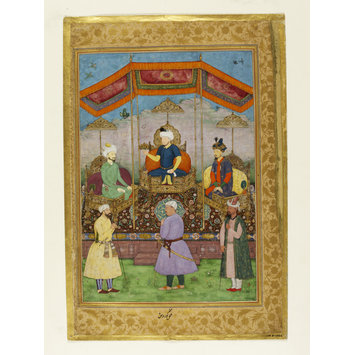 Timur (1336–1405), the Central Asian ruler from whom the Mughals were descended, sits in the centre of this allegorical painting. He hands the imperial crown to the founder of the Mughal dynasty, Babur (r.1526–1530), who is seated to his right. On his left is Babur’s son Humayun, the second Mughal emperor (r.1530–1540 and 1544–1545), who briefly lost the throne and was forced into exile in Iran. All are seated on jewelled thrones beneath parasols, an emblem of royalty. Before them stand their chief ministers, all identified in minuscule Persian inscriptions: on the right is Bayram Khan, with Mirza Shah Rukh and Mirza Rustam in the middle and on the left respectively.

An attribution in black ink on the lower border notes that the painting was done by Govardhan, an artist of the imperial Mughal workshop during the reigns of Jahangir (r. 1605-1627) and Shah Jahan (r. 1628-1658). It may have been done to mark Shah Jahan's accession. It came from a group of paintings now divided between the V&A and the Chester Beatty Library in Dublin, popularly known as the ‘Minto Album’ from its association with a former owner, Lord Minto. A companion painting from the same album now in the Chester Beatty Library depicts Akbar, Jahangir and Shah Jahan, the immediate successors of Babur and Humayun, similarly enthroned.

Painting in opaque watercolour and gold on paper with borders painted with scrolling ornament of leaves and flowers in gold. Timur sits in a jewelled throne beneath a canopy at the centre, handing the Timurid crown to Babur on his right, watched by Babur's son and successor Humayun on his left, both of whom have similarly opulent thrones. Their respective chief ministers stand before them. All are identified by minute inscriptions in Persian.

[3 gold inscriptions identify their Chief Ministers. From right to left:]
[a] Bayram Khan[on his turban]
[b] Mirza Shah Rukh [on his belt]
[c] Mirza Rustam [on the panel of the platform pedestal, next to his stick]
[1] Persian inscription in black ink, in the border beneath the painting

The folio is from a group of paintings acquired at auction in 1925 where they were sold as "The Minto Album" and subsequently divided between the Chester Beatty Library, Dublin, and the V&A.

Allegorical painting of the Central Asian ruler Timur, with the Mughal emperors Babur and Humayan, all enthroned and beneath a red canopy, with their respective chief ministers standing before them; opaque watercolour and gold on paper, Mughal, ca. 1630 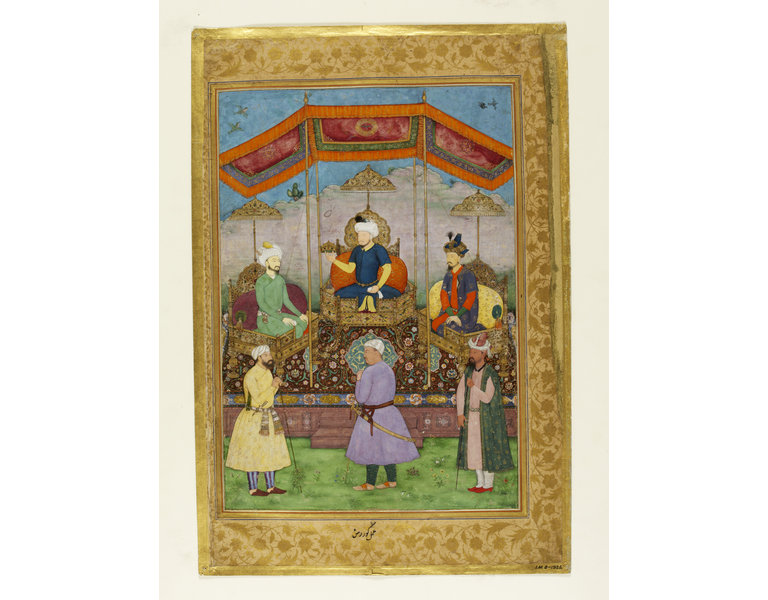