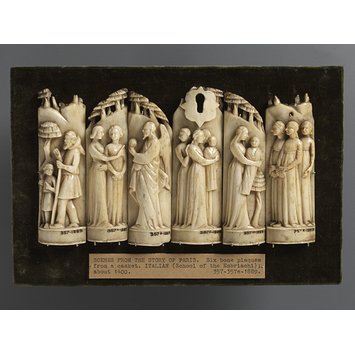 The Story of Paris

These six oblong and curved placques were originally part of a casket. They are carved in relief with figure groups and narrate the story of Paris from his childhood onwards.
At the wedding of Peleus and Thetis, Eris threw a golden apple into the crowd of the guests. She stated that it should be the prize 'for the fairest'. Athena, Hera and Aphrodite each claimed it. Zeus told Hermes to lead them to Mount Ida, for Paris to judge about the matter. Each goddess promised him protection and special gifts if he would choose her as receiver for the apple: Hera guaranteed to make him ruler of Asia; Athena promised him wisdom and victory in combats; Aphrodite offered him the love of the most beautiful woman in the world, Helen of Sparta. Paris gave the golden apple to Aphrodite.

Six panels, portions of an octagonal casket. Sections of bone, oblong and curved, carved in relief with figure groups.
Scenes from the story of Paris. 357c-1889 represents the baby Paris being handed to Queen Hecuba's attendants to be killed; the lock plate was incorporated into this scene, the first in the narrative. 357a-1889 shows Hecuba giving the order. 357d-1889 probably comes from the scene where Agelaeus gives the swaddled baby over to his wife, who is shown leaving the scene at the right. 357-1889 depicts the child Paris and Agelaeus as shepherds. 357e-1889 shows the three goddesses from the moment prior to the Judgement of Paris. 357b-1889 depicts a bearded and winged Mercury holding the apple of discord.

Plaques (six), bone, from a casket, the Story of Paris, by the workshop of Baldassare Ubriachi, Italy (probably Venice), ca. 1390-1410 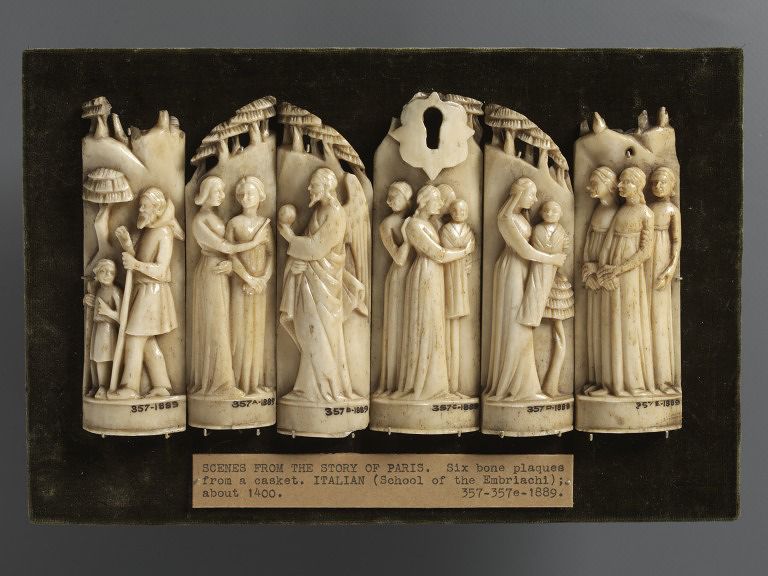