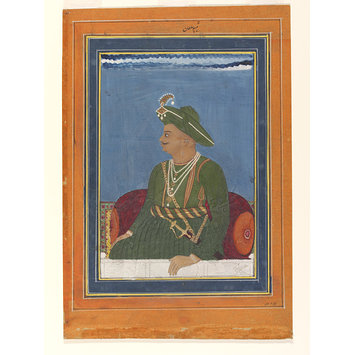 This painting by an anonymous Indian artist was probably done in Mysore. It depicts Tipu Sultan, ruler of Mysore from 1782 to 1799, who was defeated by the British at the Siege of Seringapatam. The V&A houses a mechanical organ that once belonged to him. It is in the shape of a European being mauled by a tiger and is known as 'Tippoo's Tiger'.
In the decades following Tipu Sultan's defeat and death, Delhi artists included the Mysore ruler in the series they often painted of famous Indian rulers. They seem to have used this portrait, which includes jewellery that is distinctively different from northern fashions, as a model. One such Delhi miniature is also in the V&A collection (646-1870).

Portrait of Tipu Sultan (1749-99). The ruler of Mysore is wearing a bright green tunic with matching green turban, decorated with a jewelled turban ornament. He has three pearl necklaces each with a jewelled pendant, and a jewelled sash over his right shoulder, which holds a gold sword on his left hip and a large green and yellow striped patka, a sash or belt. Tipu Sultan rests against a red bolster; the background is blue.

Tipu made strenuous efforts to legitimise his regime. This profile portrait, with the ruler’s hand resting on a parapet, recalls the conventions of a Mughal jharokha or ‘balcony’ painting in which the emperor presented himself to his people. The green of his turban and robe was the colour associated with the Prophet Muhammad. 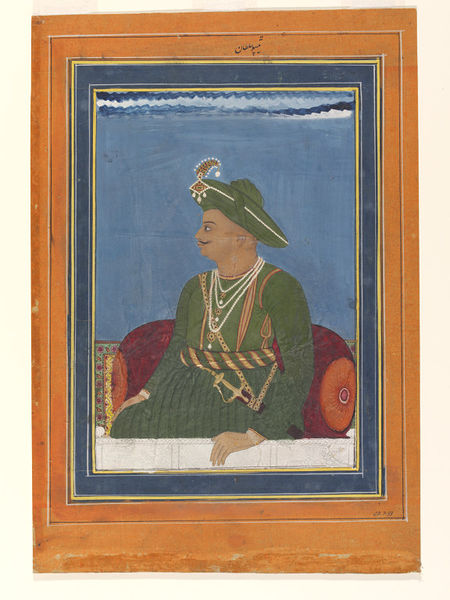