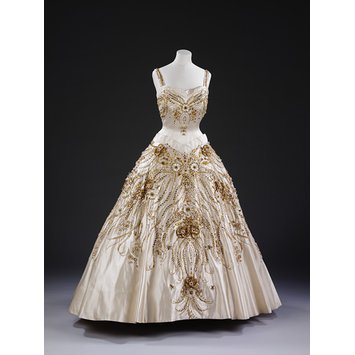 The Flowers of the Fields of France

Lavish gold and white beadwork encrusts this ivory evening dress worn by Queen Elizabeth II on a state visit to Paris in 1957. The dazzling, jewel-like details of the embroidered design include miniature bees, grasses, wheat and wild flowers. These motifs are worked in relief in faceted glass, gold beads, brilliants and variously shaped pearls, mother-of-pearl and gold petals. It also features an extravagant back bow. The design of this single-occasion gown diplomatically refers to French motifs, including the flowers of France and large gold bees, the emblem of Napoleon. It was intended to both compliment the French nation and draw attention to the Queen.

Stated full skirted evening dress of ivory silk satin. It consists of a princess seamed bodice with draped fold at hips, which extends into a large self-fabric bow. It is embroidered with pearls, beads, brilliants and gold thread.

This splendid state gown with an extravagant back bow was designed for the Queen's state visit to Paris, April 8-11th 1957. The design diplomatically makes reference to French motifs, including the "Flowers of the Fields of France" (such as daisies and crossed wheat sheaves) and Napoleonic bees.

It was worn to the state dinner on the first night (Monday 8th April), hosted by President René Coty at the Elysée Palace, followed by a visit to the Opéra to see a ballet by Lifar from The Diaries of Cynthia Jebb.

The dress was worn with a necklace (of 4 stones with centre drop jewel) and small earrings, a tiara, and long white evening gloves adorned with a bracelet (or small watch) on the left wrist. The Queen also wore the jewelled Badge of the Legion d'Honneur and sash from her right shoulder to her waist (left). She also carried a small white handbag and wore a white fur stole for travelling.

The dress was displayed at Kensington Palace in 2006-7. Research conducted by Kensington Palace included an interview with Maureen Markham, one of the embroiderers who worked on the dress. She recalled that they worked with blacked-out windows to avoid the Press and that she hoped the Queen would have nice plush cushions to sit on so as not to crush the embroidery.

The Queen wore this dress again to the Opera in the early 1960s.

The Museum of Civilization, Canada, has a dress designed by Norman Hartnell for the Queen's state visit to Canada in the same year, 1957. It is known as the 'Maple Leaf of Canada dress', and has a beautiful garland of maple leaves mingled with white roses (the emblem of the House of York). Each leaf is made of green velvet appliquéd with crystal and imitation emeralds. The white roses are formed with crystals, imitation white pearls, and imitation diamonds. The Queen wore the dress at the state banquet and reception at Rideau Hall, the Governor General's official residence, on October 14, 1957.

Hartnell, who had been court dressmaker since 1938, designed this dress for the Queen's state visit to Paris. The embroidery, with poppies, fleurs-de-lis, wheat sheaves and bees (Napoleon's symbol of industry) was designed to compliment the host nation. One of the embroiderers said, 'We just hoped that she always sat on plush chairs so it did not get squashed!'

Designed for the Queen's state visit to Paris in April 1957. 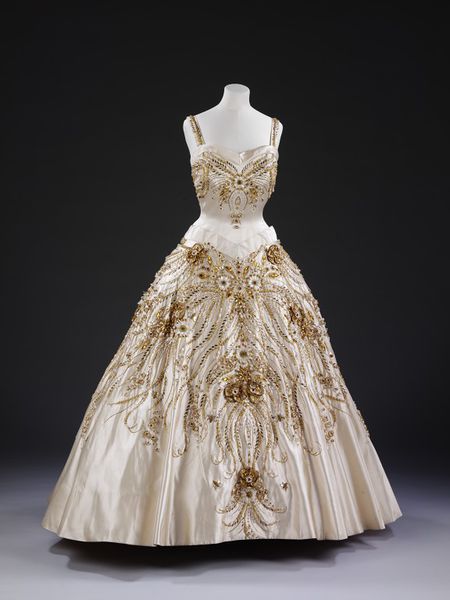