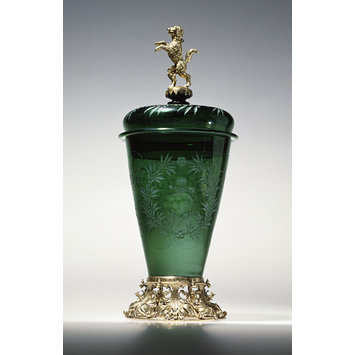 The glass of this splendid presentation beaker has a wheel-engraved decoration attributed to the Nuremberg glass engraver Hermann Schwinger. This has been achieved by holding the glass against small and fast rotating copper wheels, fed with water and an abrasive powder. Wheels of different sizes are used to cut a pattern into the glass surface. It takes great skill to engrave the flowing lines of the calligraphic inscription on the beaker. The engraver has cut and polished a small lens in the opposite side of the beaker, through which the inscription can also be viewed.

It is not quite clear when the silver-gilt foot and final in the shape of a dog have been added. The foot, which replaces the original glass foot which was of a similar shape and size, has a Nuremberg hallmark. The dog bears an engraved monogram 'I.A.V.' and the year '1656' on its collar. As this date is slightly earlier than the date of the glass and its engraving it is likely that the year is commemorative of an earlier date or that the dog was originally made for an other objects and later re-used as a finial on this beaker.

The splendid mounts as well as the fine wheel-engraving elevate the status of this object to a special presentation glass, used at very special occasions.

Footed, covered beaker of clear green glass with silver-gilt foot, bearing assay marks for Nuremberg and the maker's mark FH, probably for Friedrich Hillebrandt (d. 1608). The dog is probably a later addition, and probably originally formed part of a pendant: it is engraved I.A.V.1656, the date possibly being commemorative. The glass is wheel-engraved with laurel wreaths and a calligraphic inscription "Vita quid est homnis"(What is the life of man?), which can be viewed through a cut and polished lens in the opposite side of the glass.

Vita quid est homnis
What is the life of man?

Previously the glass was believed to date from about 1600 because of a hallmark on the silver-gilt mount, attributed to Friedrich Hillebrandt, who died in 1608. The shape of the glass could easily date from that period, but the type of green glass seems more typical for the later 17th century. 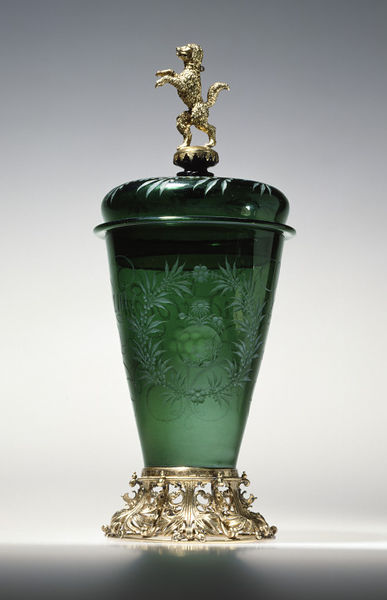