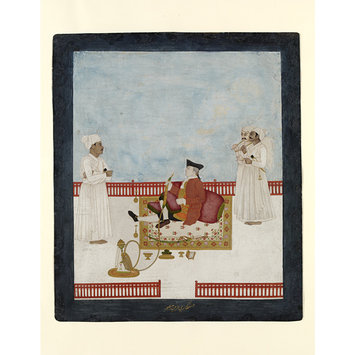 This painting probably depicts William Fullerton of Rosemount, who joined the East India Company's service in 1744 and was second surgeon in Calcutta in 1751. He was present at the siege of Calcutta in 1756 and became mayor of Calcutta in 1757. In 1763 Fullerton became a surgeon to the Patna Agency. He was the only Englishman to survive the massacre of the English during the war with Mir Kasim of Murshidabad.

Numerous East India Company officials adopted aspects of Indian court life during their careers in India, and, as an excellent linguist, Fullerton was very much at home in Bengal, keeping one or more Indian bibis (mistresses). Fullerton was a collector of paintings and it is likely that the Murshidabad artist Dip Chand painted a number of pictures for him when visiting Patna. This portrait shoes Fullerton receiving a visitor, attended by servants with fly-whisks (chauri). He is depicted seated on a rich carpet, leaning against a bolster and smoking a huqqa. Nearby are two rosewater sprinklers, a sword, and a box for betel nut. These accoutrements are generally assumed to signify Indian royalty, thereby conflating Fullerton's portrait with that of an Indian prince.
The painting is inscribed 'W.F. 1764' on the back.

Painting, opaque watercolour on paper. An East India Company official is shown in uniform, seated on an embroidered floor spread, leaning against a bolster and smoking a huqqa, with three attendants in waiting. Probably a portrait of Dr. William Fullerton of Rosemount, a Scottish surgeon.

Dr. Fullerton was a patron of the local Murshidabad painters. Paintings by Dip Chand and other painters in his school differed from other Murshidabad court work of the period in the choice of subject matter: it was unusual to depict a European in paintings like this. 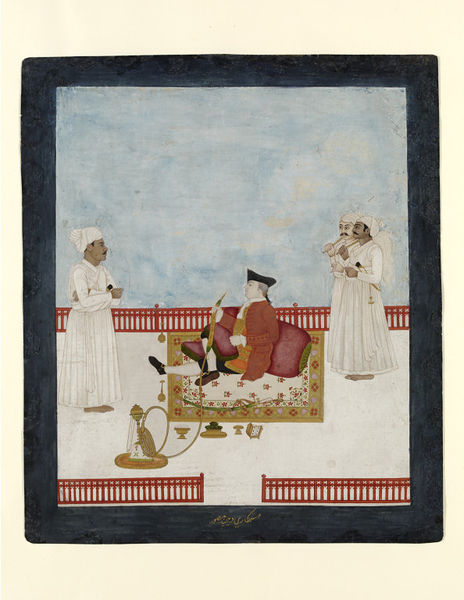