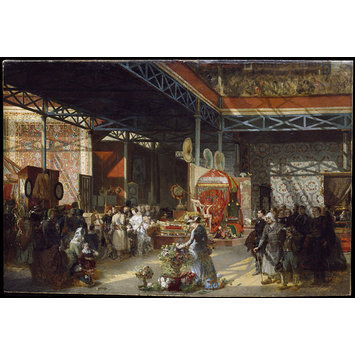 Queen Victoria, Prince Albert and three of their children at the Indian Pavilion of the Great Exhibition

This work is a fine example of Lafaye's history paintings, a category in which he specialised recording notable events of his time. The picture shows the visit of the Queen Victoria, prince Albert and their family to the Indian Pavilion at the Great Exhibition of 1851. Lafaye probably starts working on this composition while in London in the autumn 1851. Typical of his art is the fine chiaroscuro and diffuse light of this interior scene.

Interior of an exhibition space with apparent steel structure, large Indian tent panel hanging on the walls and a Maharaja’s throne set in the middle of the composition among other Indian pieces of furniture and artefacts; the place is crowded with people in 19th century clothes.

Given by Dr Germaine Montreuil-Straus and Mlle Yvonne Montreuil in memory of their grandfather, Prosper Lafaye, 1966

Historical significance: This painting is a fine example of Prosper Lafaye's output of history paintings. It shows Queen Victoria, Price Albert and three of their children in the Indian pavilion at the Great Exhibition of 1851. According to the painter's notes, he started the painting in 1851 while visiting London that year and added about 30 years later the members of the Royal family as well as few figures on each side and notably, the portrait of his granddaughter Yvonne (one of the donors) as a little girl in the foreground.
Partly self-taught, Lafaye executed many interior scenes in a Romantic taste with powerful chiaroscuro. His painted oeuvre mostly witnessed the events of his time such as Cholera in Paris (1837- whereabouts unknown), Louis-Philippe, the Queen, King Leopold I and the Queen of Belgium visiting the Crusades Room in July 1844 (1844 - Musée National des Châteaux de Versailles et de Trianon) and View of the Salon of the Princess of Orleans (1842-Musée des Arts Décoratifs, Paris).
Lafaye painted in the same year another version of the present painting as well as the Room of the Sèvres Manufacture at the Great Exhibition of 1851, both in the Musée des Arts Décoratifs, Paris. Lafaye used to consciously prepare his compositions with the help of preliminary sketches and watercolours. The Museum owns almost full-size watercolour sketch of the present painting (see P. 56- 1968). Dated 1851-59, this study provides an interesting insight into the artist's working practice as he sometimes used to re-work his composition over the years. 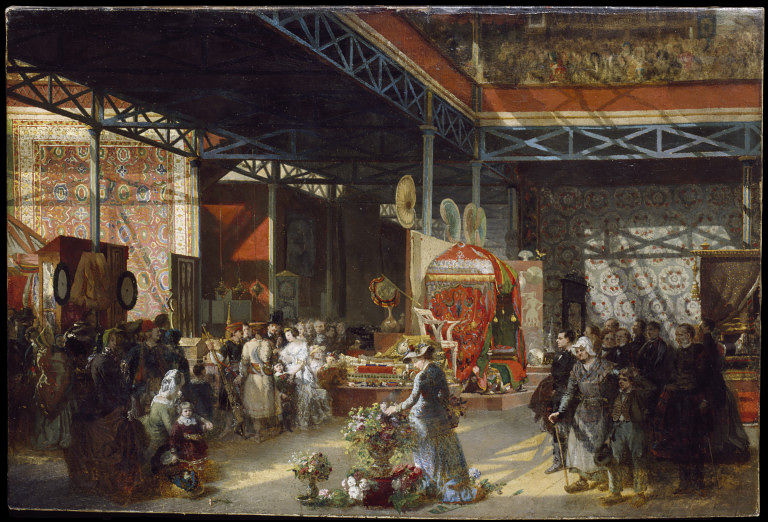