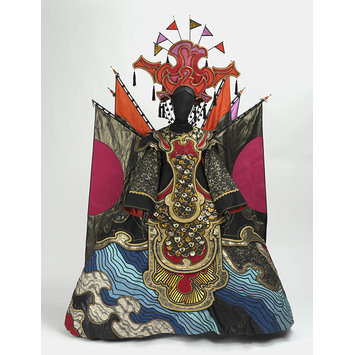 The Wooden Prince, a dancing-play in one act, was inspired by Bartók's interest in folk music and folk lore. The wooden prince of the title is a model, created by a human prince to attract the attention of a princess, but a malignant fairy, wishing to keep them apart, brings it to life and the princess falls in love with it. Fortunately the fairy takes pity on the prince and, in true fairy-tale manner, all ends happily with the lovers reunited.

The production was influenced by the Chinese Peking opera, a theatrical form in which stories are told through movement, singing and complex, often highly acrobatic, movements. The costumes convey character and roles to the audience - thus the wavy patterns on the Fairy's costume are associated with power while the attached flags at the back signify hard kao armour, and the 'armour' is also indicated by the overlapping scales on the breastplate of the costume.

The costume is superbly authoritative, not just in scale, with its large headdress and wide skirt, but in colour, using bold, primary blue and red with black and metallic fabrics. The variety of fabrics breaks up the surface - black floral Lurex, silver woven with tiny silver floral pattern, areas of blue overlaid with waves of black braids, and subtle touches of deep red. Given the costume, the role was somewhat static, but the impression of movement was conveyed by the black braid waves and by the lighter fabric used for the flags, which streamed out behide the dancer or moved subtly when she was still. The front panels are covered with individually applied 'scales', executed in several different black and gold Lurexes, interspersed with the silver floral brocade, which also 'move' as they catch the light. Despite the complexity of the design, the costume never feels fussy; the decoration is so controlled that all the elements are clearly defined.

Prowse was a brilliantly inventive designer, and the appliqué panels and use of different materials to divide up a surface are characteristic of his work. Although he usually designed for the intimate space of Glasgow's Citizens' Theatre on very small budgets, he was equally capable of working on a large scale in opera houses, and this costume would have registered clearly in the vast spaces of the London Coliseum, where the ballet was performed. Its scale and colour 'spotlit' the character of the Fairy, and established her dominance over the drama.

The costume was designed by Philip Prowse for the Fairy in Béla Bartók's ballet The Wooden Prince, choreographed by Geoffrey Cauley, London Festival Ballet, London Coliseum, 1981. This was the British premiere of the ballet, staged as part of the celebrations marking the centenary of Bartók's birth. The Fairy was played by Patricia Ruanne.

Costume for the Fairy in The Wooden Prince
1981

The first British production of Béla Bartók’s ballet The
Wooden Prince took place during the 1981 celebration
of the centenary of his birth. Choreographer Geoffrey
Cauley and designer Philip Prowse gave his fairy tale
a Chinese flavour. This elaborate costume for the Fairy,
worn by Patricia Ruanne, restricted her performance
to grace and presence rather than virtuoso movement. 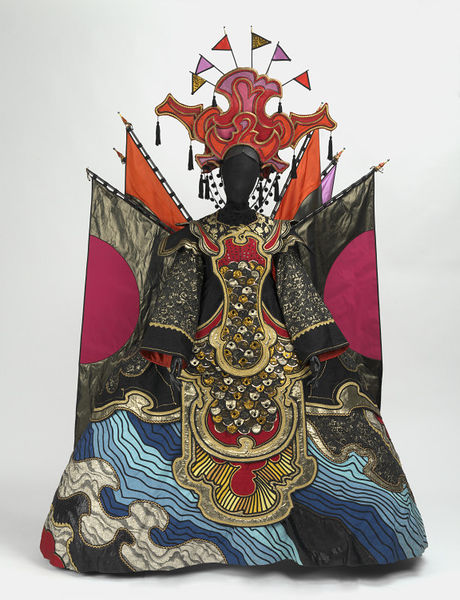