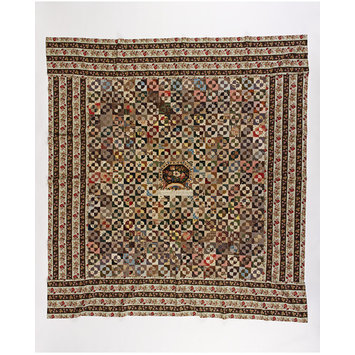 Printed commemorative panels were very popular during the early nineteenth century and were often used as focal points for pieced framed coverlets and quilts, enabling the maker to build the quilt outwards until the quilt reached the required size. The block printed panel used at the centre of this patchwork coverlet was printed to commemorate Wellington's victory at Vittoria, the last battle of the Peninsula War in 1813. The epitaph stitched underneath the panel was written by William Grove and published widely, including The Gentleman's Magazine of 1793.

The range of dates in the coverlet, including papers dating from the 1790s and the date of the central commemorative panel, suggests that it was worked on for a number of years, but never finished as the tacking stitches have not been removed. The fabrics are thought to have been sourced near Rochester, as some of the receipts in the templates relate to commercial premises in the area. Family history associates this coverlet with the marriage of John and Elisabeth Chapman. The papers still visible in the reverse were said to be their love letters. Closer examination reveals that they are actually ledger books, children's copy books and receipts.

Unlined patchwork coverlet of a wide range of block-printed cottons in the repeating pattern now known as 'jockey's cap'. A block printed central panel shows flowers tied with a blue ribbon, with the inscriptions 'Wellington' and 'Vittoria'. The printed cottons include coral-like shapes, stripes, spots and flowers. The tacking stitches and paper template are still intact. Under the central motif is a panel of plain white linen, on which is embroidered in dark blue silk a verse. Also embroidered in cross stitch are the names 'John and Elisabeth Chapman' and 'September 19 1829'. The maker has used a slightly different shade of blue silk, and their placement suggests they were added after the completion of the verse.

'WELLINGTON / VITTORIA'
On the central motif below the flower bouquet

'John and Elisabeth Chapman' [and the date] 'September 19 1829'
Embroidered in cross-stitch.
The maker has used a slightly different shade of blue silk, and the placement of these inscriptions suggests that they were added after the completion of the epitaph verse.

O luck husband blest of heav'n
To thee the Privilege is given
A much lovd wife at home to keep
Caress touch talk to - even sleep
Thrice happy mortal envied lot
What a rare treasure thou hast got
Who to a woman can lay claim
Whos temper evry da the same
The central inscription is taken from an epitaph written by William Grove and published in various formats in the late eighteenth and early nineteenth centuries.

The central inscription 'O luck husband blest of heav'n ... Whose temper evry day the same' on this coverlet is taken from an epitaph written by William Grove and published in various formats in the late eighteenth and early nineteenth centuries, including The Gentleman’s Magazine of 1793. The epitaph was dedicated to Mary Van Butchell, who – at the request of her husband, Dr Van Butchell – was embalmed after her death in 1775 and put on display in a glass case in the front room of his family home in London. In choosing this verse, the maker may have been alluding to the scandalous story that captured popular imagination, or she may simply have selected it as a charming and witty inscription for her coverlet. The range of dates in the coverlet, including papers dating from the 1790s and a central commemorative panel produced in 1813, suggests that it was worked on over a number of years, but never finished (as the tacking stitches are still in place). The fabrics are thought to have been sourced near Rochester, as some of the receipts in the template relate to commercial premises in the area. The papers still visible in the reverse of the unlined coverlet reveal a typical range of papers available in the middle and working class home: ledger books, children’s copy books, advertisements, newspapers and receipts.

According to the donor's family history, the coverlet was made by Stephen Baker's great aunt, Elisabeth Chapman. A genealogical trace reveals that Elizabeth Chapman was born around 1801. In the 1851 census, she was living at 41 London Road, Strood, Kent, the wife of John Chapman. John was born in Hull in 1813, and may have moved to Kent as an economic migrant. By 1851, he was working as a brick maker on the local brickfields, which provided work for many in the area. They had two children; William (born 1842) and Ann (born 1844). By the 1871 census John and Elizabeth Chapman were living with John and Elizabeth Baker at 16 Temple Street, Strood, Kent. John Chapman's profession is listed as labourer. John Baker, a junction engine driver, was the grandfather of Stephen Baker.

William Chapman married and had a son, William Charles Chapman (born 1865). In the 1881 census, they are listed as on board the vessel Harriett.

Historical significance: At the start of the nineteenth century, the British market was flooded with a new range of printed cottons. They were used for clothing and furnishings, including the creation of light, bright coverings for the bedroom. Tailors and dressmakers capitalised on consumer demand by offering fragments, cuttings and ready-cut patches for use in patchwork and quilting.

Printed textile panels (such as the example at the centre of this coverlet) became particularly popular. Many celebrated military victories and coronations. Some were associated with particular causes. Women began to include such panels in their patchwork, revealing an engagement with politics and public debates of which little other record exists in domestic craft.

Family history associates this coverlet with the marriage of John and Elisabeth Chapman. The papers still visible in the reverse - which provided the basic shapes over which the fabric was tacked for sewing - were said to be love letters between the two. Closer examination reveals that they are actually ledger books, children's copy books, advertisements, newspaper and receipts. The central inscription is taken from an epitaph of 1793 by William Grove. The names 'John and Elisabeth Chapman' were added at a later date. 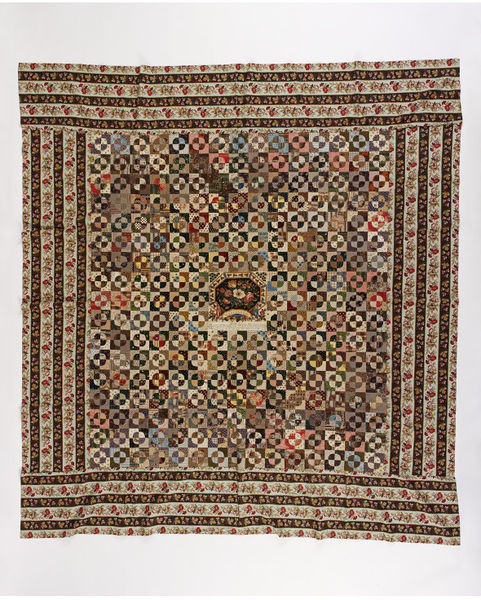