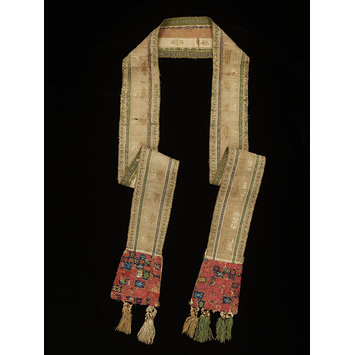 The maniple has been part of liturgical dress for Roman Catholic deacons, priests and higher clergy since the 9th century. It is worn hung over the left forearm and was probably carried as a formal sign of office. It echoes the shape and decoration of the longer stole which is usually worn around the neck.

A long narrow band, broadening at the ends to a trapezoid shape and finished with fringes, it usually has a device at each end. In this case, the beaded embroidery comprises a striking geometric pattern. Specifically religious references are evident in the small painted image of the Virgin and Child on the left end, and the wording woven into the strip that went round the neck.

Ecclesiastical maniple, made up of a tablet-woven band of gold and silk threads. At each end, a plain red textile lined with leather or parchment and embroidered with beads, has been added, thus creating a trapezoid shape. The remnants of a red (now faded to brown) and green fringe exist at each end: on the left, 2 red tassles remain; on the right, 2 green and one red.

The woven band incorporates a written text in capital letters on each side. This text flanks a band woven with motifs of wyverns, birds and decorative crosses between two decorative stripes. The beaded embroidery on each end is in a poor state, many of the beads missing. The pattern is geometric and made up of beads in dark blue (or black), turquoise, green, yellow, red and white. Some metal sequin-like decorations also remain round the beaded areas. At the left end in the centre, in a space between two beaded squares is a small painted image of the Virgin and Child.

Tablet-woven in silk and gold, with bead embroidery and painted motif on silk lined with parchment or leather

Acquired from the Bock collection as a stole, Sicilian, 13th century in 1863 and identified in Dr Bock's Revise of 1883 as early 1300s maniple, similar form found in maniple in Halberstadt Cathedral Treasury; similar examples in Palermo in 1200s. In Kendrick's revise, October 1904 called a maniple, woven in silk and gold, the ends embroidered with beads. Probably Sicilian (or, as considered by Dr Bock, German weaving); late 12th or early 13th century. Barbara Pregla (2009) in the most recent scholarly catalogue considers the piece a maniple rather than a stole, because of its length.

Historical significance: A rare surviving example of a textile woven to purpose from this period.

The stole and maniple are two of the Eucharistic vestments, or special garments worn by the clergy and their assistants during the liturgical ceremony of the Mass. They may be made of the same textiles as the chasuble or dalmatic, or they may be embroidered to complement them, the patterns often being geometric. They are worn under the chasuble or dalmatic (with some exceptions). During the Middle Ages the way in which the stole was worn identified different ranks of clergy: deacons wore it over the left shoulder and tied at the right side; priests wore it round the neck with the ends crossed on the breast and held in place by the girdle of the alb, or hanging straight down if it was worn with the ungirdled surplice; bishops wore the stole hanging straight down the front (because their albs were ungirdled). From the tenth to twelfth centuries many inventories mention gold-decorated stoles which could be woven with a gold thread or embroidered. The patterns were nearly always geometric; by the twelfth century the shape became trapezoid a short distance from the ends. The precise instructions of St Charles Borromeo at the end of the sixteenth century codified the dimensions, shape and decoration: 8.5 feet long, about 4.3 inches wide, broadening towards the ends, made of material to match the chasuble, and decorated with fringing at the ends, and with three crosses (one in the centre and one at each end.(Pauline Johnstone. High Fashion in the Church. Leeds: Maney, 2002, p. 17-18). This particular stole may have been altered in the sixteenth century or later although fringing was used by the ninth century.

The stole is a long narrow band (about 12 cm wide, and long enough to go round the neck of the wearer and reach his feet). It usually has a device at each end and a cross at the neck. According to Herbert Norris, the stole developed from the Roman sudarium (a linen cloth carried around the neck and used for wiping the face), the word stola being adapted from the ninth century onwards for this item. By the twelfth century it had achieved its current form and often had fringes at the ends, with rectangular or triangular pieces of embroidery. During the Middle Ages stoles were worn at almost all liturgical functions, and crosses were nearly always incorporated into the pattern. Pauline Johnstone notes that it was not strictly speaking a 'vestment' as it was not of late classical origin, although one authority has likened it to the scarfor office worn by the Roman Consuls. It is rather an insignia, a sign of office, with which both deacon and priest were invested at the time of ordination. (Herbert Norris. Church Vestments. Their Origin and Development. London: J.M.Dent & Sons Ltd, 1949, pp. 88-91; Johnstone, p. 17.)

STOLE. Green, purple, and crimson silks embroidered in gold with pattern of stags, griffins, and foliage, and bordered by Latin inscriptions along the whole length. The ends are of crimson silk decorated with glass beads, and fringed. Sicilian. 13th centy. L. 5 ft. 9 in., W. 31/4 in. Bought.
8388-63. [1863]
STOLE.
GERMAN; 13th century.
Inscribed with a Latin prayer incorporating the name ALEBERTUM, possibly that of the donor.
Tablet-woven, silk and silver-gilt strip on a silk core.
The ends originally of patterned silk now covered with plain silk, tabby weave.
Ornamented with glass and gilt beads and seed pearls, threaded on linen and secured in a chequered pattern by silk and silver-gilt strip on a linen core; between are silver-gilt spangles. On one end-panel, a painted miniature of the Virgin and child. Later knotted tassels.
Ex Bock Collection. 8588-1863 [1977]

Conflicting attribution in the Accession registers suggests either Sicilian or German origin; probably altered at a later date (fringe added). Most recent attribution from Barbara Pregla (2009) has been incorporated into this record. The woven band made in Southern Germany, the embroidery in Northern Germany. 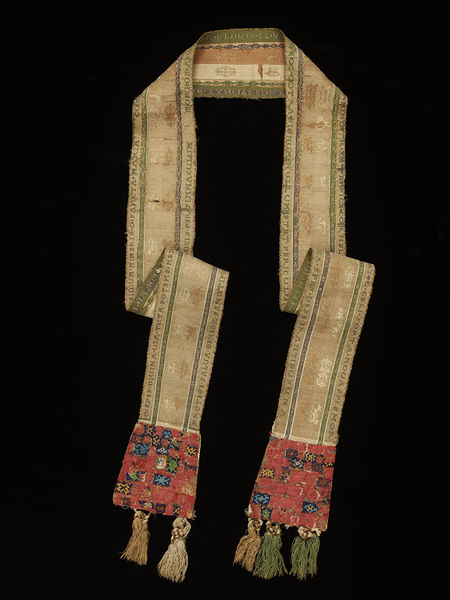