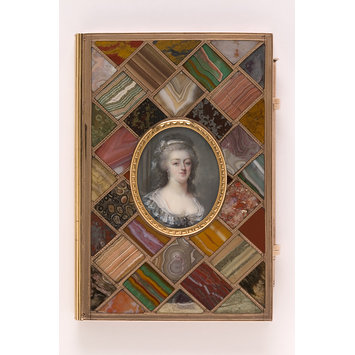 Johann Christian Neuber was the most innovative and talented goldsmith at the Dresden court of Frederick Augustus III, Elector of Saxony (1750–1827). He perfected the technique of hardstone mosaics set in gold mounts for boxes and other luxury objects. His celebrated creations proudly display native stones and were used as diplomatic demonstrations of Saxon wealth.

A gold rectangular notebook, each side with hardstone lozenges set within goldwork, later added with two oval, gold framed miniatures: Marie-Antoinette on one side, Louis XVI on the other, both circa 1780. It closes with a gold pencil placed through loops to the right-hand side, the inside has a later red silk lining and contains a later red silk paper notebook.

Johann Christian Neuber (1736-1808), Court Jeweller in Dresden, is one of the most celebrated goldsmiths for his most refined hardstone marquetery set in Galantariewaren (useful but precious objects). Neuber was apprenticed to Johann Friedrich Trechaon, a goldsmith of Swedish origin, in 1752 at the age of 17. In 1762 he became master goldsmith and burger of Dresden, succeeding Heinrich Taddel as director of the Grünes Gewölbe, his father-in-law and mentor from whom he
acquired his knowledge and talent for working with hardstones.

Neuber's leading speciality had been the Steinkabinetts-Tabatiere, a snuff box inlaid with as many as 140 different Saxon polished hardstone specimens, numbered to correspond with an often-concealed explanatory booklet ( one being in the permanent collections of the V&A: http://collections.vam.ac.uk/item/O113565/box-neuber-johann-christian/)

Neuber designed a countless number of snuff boxes, each similar yet totally distinct, sometimes centred with an ivory portrait miniature, a Meissen porcelain plaque, or a Roman Micromosaic, the newest and fashionable contemporary invention (see http://collections.vam.ac.uk/item/O157805/bonbonniere-neuber-johann-christian/)

Seeking constant innovation and responding to demand from his royal and aristocratic European clientele, Neuber created other types of luxury objects beyond snuff boxes such as cane handles, watch cases, buttons, but also tables and jardinieres on larger scales. Unfortunately, by the end of the 1780s, his over-extended enterprise started to suffer increasingly severe financial problems: business failure finally led to Neuber's retreat from Dresden in 1805 to the house of his son Christian Adolf in Eibenstock where he died on 2nd April 1808.

Spotlight on Conservation
Johann Christian Neuber was celebrated for his use of exclusively Saxon stones from quarries near Dresden and Chemnitz. He was very ingenious in creating colours to fit his designs when they were not available naturally, sometimes painting them. Here, two lozenges of yellow, striped and transparent agate have been painted on the reverse with vivid green pigments.

At a later date, the notebook cover was slightly altered with the addition of two 18th-century portrait miniatures of King Louis XIV of France and Marie-Antoinette. The gold binding for the two panels has also most likely been replaced, since its colour is yellow while the rest of the mounts are of subtle pink gold, a tell-tale sign of later alterations. 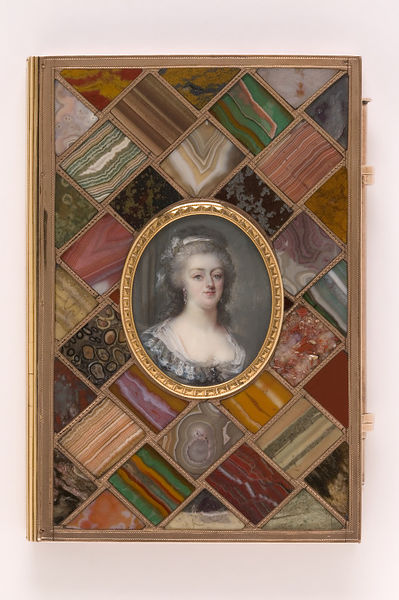