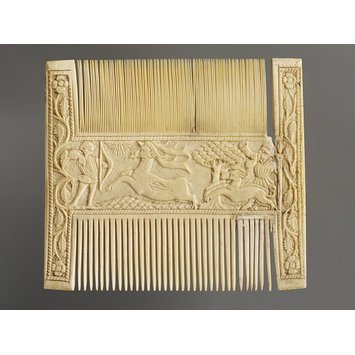 This is an ivory comb, made in the South Netherlands in about 1440-1470. It represents a hunting scene on one side and five dancers on the other.

The comb has since the Antiquity been a fundamental tool for personal grooming, used both by men and women. In the Gothic period ivory was often employed for the production of deluxe decorated combs. The Gothic comb is always carved on both faces and consists of two registers of teeth, one fine the other broader, above and below the narrative strips.
Ivory combs, together with mirror cases and gravoirs for parting the hair, formed an essential part of the trousse de toilette or étui (dressing case) of the typical wealthy lady or gentleman in the Gothic period. Considering the original ubiquity of such combs and in comparison with ivory mirror cases, a surprisingly small number survive from the fourteenth century.

Ivory comb with hunting scene and dancers. On one face, five figures are engaged in the moresca, a folk dance popular in the fifteenth century. Two bearded men flank a lady; all three striking the energetic moves of the dance; a musician at the left plays a pipe and tabor, and a fool holding a staff with fool's head cavorts on the right. On the other face is a stag hunt, with an archer at the left firing his bow and striking the stag with an arrow in its hind quarters. The stag is pursued by tow hounds, while a huntsman, holding his spear in his left hand, blows a large horn. 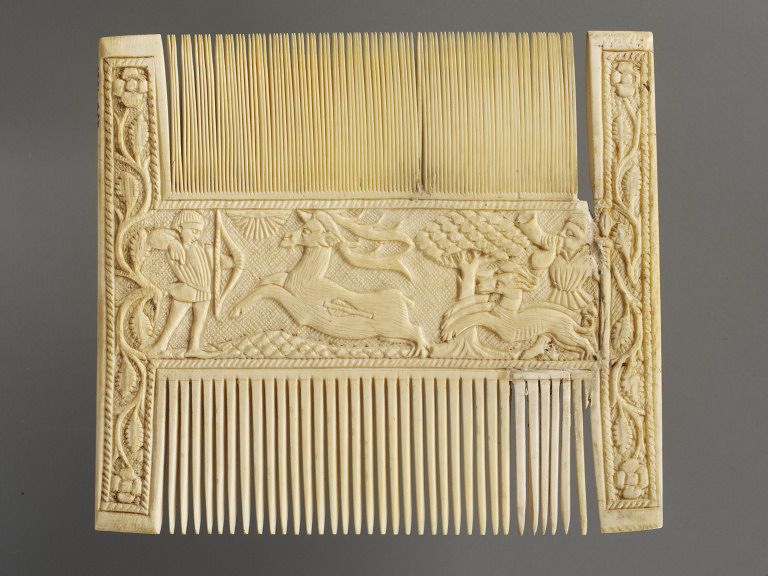