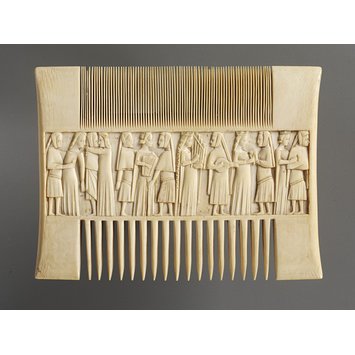 This is an ivory comb made in North Italy, Venice in about 1400. The comb is carved on both sides showing figures embracing and playing on musical instruments.

In the period between 1300 and 1325 workshops in Paris enjoyed a thriving market for secular ivory carvings. They produced mirror-cases, combs and gravoirs (hair parters), often selling them as sets in leather dressing cases. Subjects from romance literature appeared frequently, as did the allegorical Siege of the Castle of Love.

The comb has since the Antiquity been a fundamental tool for personal grooming, used both by men and women. In the Gothic period ivory was often employed for the production of deluxe decorated combs. The Gothic comb is always carved on both faces and consists of two registers of teeth, one fine, the other broader, above and below the narrative strips.
Ivory combs, together with mirror cases and gravoirs for parting the hair, formed an essential part of the trousse de toilette or étui (dressing case) of the typical wealthy lady or gentleman in the Gothic period. Considering the original ubiquity of such combs and in comparison with ivory mirror cases, a surprisingly small number survive from the fourteenth century.

Ivory comb with figures playing on musical instruments. On one face in a recessed band running from left to right, are a man embracing a young lady, the latter turning away; a couple embracing; a lady playing a zither and flanked by two men, the one on the right lewdly parting the lady's dress at the front; a lady with a long plait playing a portable organ; a luteplayer; a couple with a bunch of flowers; and a couple with the man turning away from the lady. On the other face are a man embracing a lady who holds a chaplet in her left hand, flanked by a lady playing a tambourine and a man playing a recorder; an enigmatic trio of figures (presumably illustrating a moralizing tale or game), consisting of a naked and blindfolded bearded man with crown who puts his right arm around the young lady on the left while the male figure on the right turns away, his arms crossed apparently in anger; a lady playing a viol; a man presenting flowers to two young ladies; a man turning away as if to walk out of the scene.